European airline shares fell on Wednesday (28-Jul-2010) as wider markets ended their six-day rally on an unexpected decline in orders for durable goods in the US. The fall was despite another day of declines in oil prices (-1.9%) to USD76.09.

Lufthansa (+1.6%) gained ahead of the release of its quarterly results on 29-Jul-2010. During trading, the group released its preliminary results for 1H2010, reporting a 23% year-on-year rise in revenue to EUR12.6 billion, and an operating loss of EUR171 million, compared with an operating profit of EUR8 million in the previous corresponding period.

The net loss for the period came to EUR104 million, compared with a net loss of EUR178 million in the previous corresponding period. In the second quarter, the operating result was EUR159 million from revenue of EUR6.9 billion.

Lufthansa Group stated that on one hand the result of 1H2010 reflects a positive demand trend, above all in the freight and intercontinental passenger businesses. On the other, it includes adverse effects such as rising fuel prices and the first-time consolidation of Austrian Airlines and bmi, as well as non-recurring factors such as the extreme winter, the strike by cockpit staff and airspace closures in Apr-2010 as a result of the volcanic eruption in Iceland.

Overall, the group stated momentum behind the performance of the business has further increased the confidence to reach its profitability targets. Lufthansa therefore continues to expect higher revenue. The Executive Board still anticipates an improvement of the operating profit, which on today's estimates should be in line with market expectations.

easyJet (-7.1%) fell after reports of its poor on-time performance, with new CEO, Carolyn McCall, stating during trading that the issue is her most immediate concern. The airline also released its 3Q2010 interim results, reporting a 5.3% year-on-year improvement in revenue for the quarter.

Air France-KLM (+1.1%) continued to rise on the back of its improved financial results released the day prior. SAS (+3.5%) also gained, despite a 0.8% decline in the OMX Stockholm 30 Index. 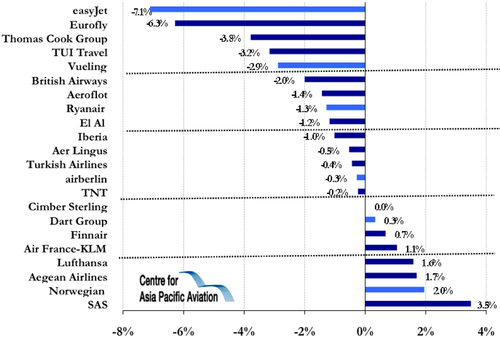