Lufthansa pilots to vote to strike; Airberlin striving for improved earnings in 2010

European markets ended the week down on Friday (15-Jan-2010), as banking stocks fell after JP Morgan reported increasing loan losses and a fall in Wall Street in early trading.

Lufthansa pilots to vote to strike

Lufthansa (+1.2%) was up at the end of trading, with the carrier failing to reach an agreement with its pilots over remuneration and working conditions. German pilot union, VC, stated the pilots will now decide by 17-Feb-2010 whether to launch industrial action. Approximately 4,500 pilots will take part in the ballot, with Lufthansa Cargo and Germanwings pilots also being invited to take part. VC has requested a pay increase of 6.4% over the next 12 months and job security for Lufthansa pilots, as they are concerned staff may be relocated to reduced pay positions at recently acquired Brussels Airlines or Austrian Airlines.

Airberlin striving for improved earnings in 2010

Air Berlin (-0.2%) stated during trading it will strive for higher earnings in 2010, compared to 2008 and 2009 results. To achieve this, it plans to significantly reduce costs and possibly sell aircraft, after already selling a number of aircraft in 2009. The carrier, Germany's second biggest airline, is reportedly already in talks about partnerships and alliance options and is open for new agreements. 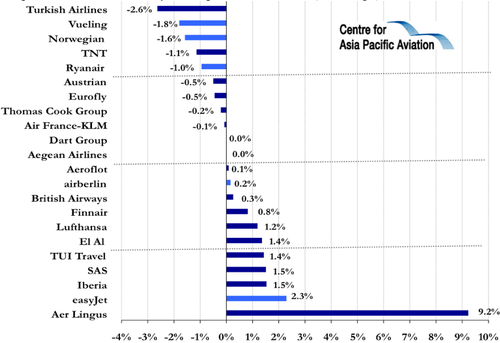