Lufthansa Group has comfortably the largest fleet among Europe's big three legacy airline groups. According to the CAPA Fleet Database, its total of 734 aircraft is 157 more than that of IAG, whose fleet of 577 is 43 more than Air France-KLM's 534 aircraft.

(Note that only those aircraft in service with airlines that are majority owned and controlled by each group are included in the above numbers.)

Lufthansa Group's superior overall fleet numbers are based mainly on its short and medium haul strength, reflected in larger numbers of narrowbody and regional aircraft. Lufthansa itself is also the biggest individual airline brand by fleet among the big three legacy groups (but its fleet is smaller than Ryanair's fleet).

Air France-KLM plans to grow its capital expenditure at the fastest rate of the three this year but has a much smaller order book for new aircraft than the other two. For all three groups, capital expenditure is at, or close to, all-time high levels in 2019. Moreover, trends in capex and profit margins are starting to diverge.

All three groups have similar widebody strength, but Lufthansa Group leads on narrowbody and regional fleets

All three groups have a similar number of widebody aircraft, with a difference of only 18 between Lufthansa Group's 193 and Air France-KLM's 175 (IAG has 189 widebodies).

Combining narrowbodies and regional aircraft, IAG has 388 and Air France-KLM has 359, a difference of only 29, while Lufthansa has 475, a much larger number.

Lufthansa is the biggest individual airline brand by fleet numbers, ahead of BA and Air France

Among the main subsidiary brands belonging to the big three groups, Lufthansa has the biggest individual airline fleet.

With 355 aircraft (including 18 at Lufthansa Cargo and 52 for Lufthansa CityLine), Lufthansa's fleet is significantly larger than those of Air France (277 aircraft, including 75 at Hop) and British Airways (295, including BA CityFlyer's 23).

However, looking outside the big three legacy groups in Europe, this is fewer than Ryanair's 455 (including 17 operated by Ryanair Sun).

KLM is the biggest of the 'number two' brands within the three groups, with 163 aircraft (including 49 for KLM Cityhopper).

For the other two groups, the second largest group fleets are LCC subsidiaries. Lufthansa's Eurowings has 127 aircraft in service (including seven widebodies wet leased from SunExpress Germany), while IAG's Vueling has 118.

The Lufthansa Group also has three other significant legacy airline fleets: 104 aircraft for SWISS (including 15 operated by Edelweiss Air), 83 for Austrian Airlines, and 52 for Brussels Airlines (now increasingly integrated into the Eurowings group).

IAG's number three is Iberia, with 104 aircraft (including 22 for Iberia Express and not including three operated by Iberia for LEVEL) and its number four is Aer Lingus, with 48 aircraft.

Air France-KLM's Transavia LCC brand is the smallest of the three main LCC subsidiaries, with 73 aircraft (42 in the Dutch arm and 31 in the French arm).

IAG's newer low cost brand, LEVEL, now has 10 aircraft, all operated under wet lease by other group companies (five operated by the Vueling subsidiary Anisec, three operated by Iberia and two by the BA subsidiary OpenSkies).

Air France-KLM's newest brand, Joon, has 17 aircraft, but this brand is to be withdrawn and reintegrated back into Air France. 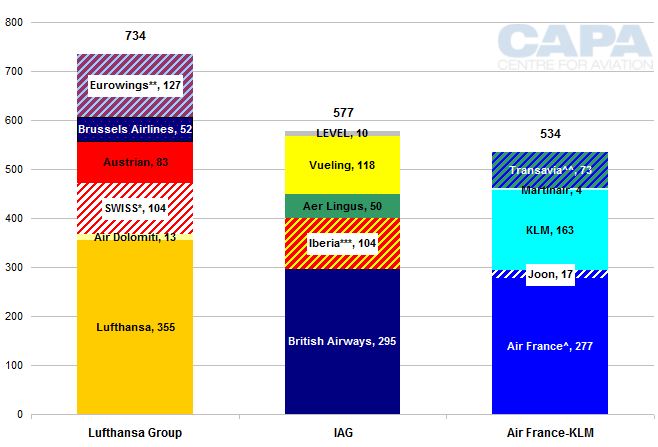 Lufthansa's extended group has an even bigger lead

In addition to airlines that are majority owned and controlled, Lufthansa Group and IAG also have joint venture airlines co-owned with other groups and/or franchise partners.

Lufthansa owns 50% of Turkey-based SunExpress (together with Turkish Airlines), which has a fleet of 45 aircraft, and SunExpress Germany has 12 aircraft (not including the seven wet leased to Eurowings).

Together with the Deutsche Post subsidiary DHL, Lufthansa also jointly owns AeroLogic, a logistics and cargo specialist, whose 11 aircraft capacity is contracted by both parents.

IAG has franchise partners that it does not own but which operate under the colours of subsidiary airlines. 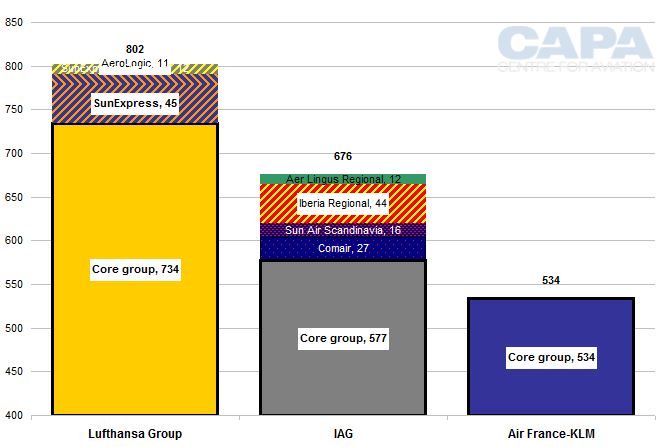 Lufthansa Group has the most freighters (IAG has none)

The three groups all take a different approach to cargo operations and the use of dedicated freighter aircraft.

All three group fleets have a similar average age

The fleets of all three groups have a similar average age: 11.9 years for Lufthansa Group, 11.5 years for Air France-KLM and 11.4 years for IAG.

All are comfortably younger than the Europe-wide average age of 14.2 years (source: CAPA Fleet Database). 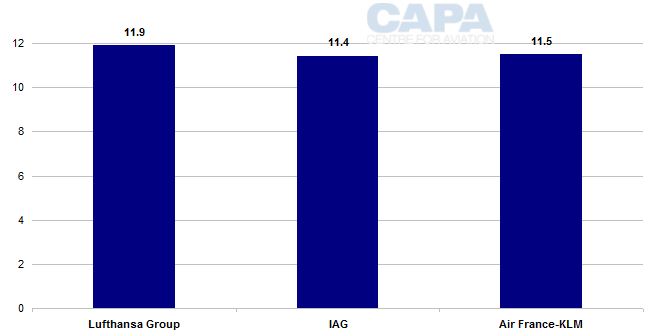 In addition to having the biggest fleet, Lufthansa Group also currently has the highest number of aircraft on order. Its 230 orders are 69 more than IAG's 159 and represent 31% of Lufthansa Group's fleet in service, compared with 28% for IAG.

Both have significant numbers of narrowbodies and widebodies on order.

Air France-KLM, consistently the laggard of the three in terms of profitability, has only 35 aircraft on order, equivalent to just 7% of its current fleet. Its orders are concentrated on widebodies, where it currently has ageing 747s and A340s in need of replacement.

Air France-KLM has no narrowbody orders currently, but plans to launch a tender offer for medium haul aircraft in 2019.

Air France-KLM has 18 deliveries projected for the remainder of this year, similar to the 19 delivered in 2018, according to the CAPA Fleet Database.

For all three, regional aircraft orders are low (or zero, in the case of IAG).

For all three, capex levels are at, or close to, record highs

Based on guidance given to the stock market, 2019 capex is planned to be at or close to its highest ever level for each group. In aggregate, the planned spend of EUR9.4 billion by the three groups is the highest ever.

IAG will also increase its capex, to EUR2.6 billion from EUR2.2 billion last year this year, but the growth will be slightly less, at 17%. 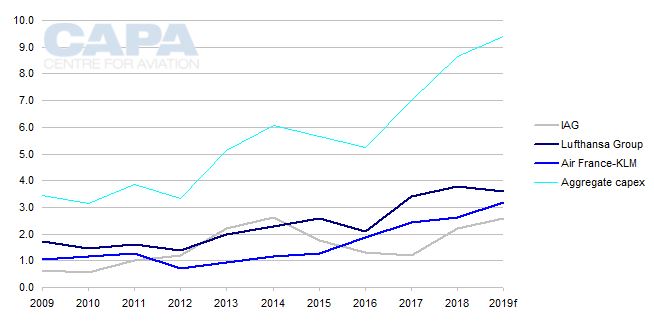 Capex and margin trends are diverging

To put increased capex into some context, it is useful to compare it with revenue to give it some scale.

Based on capex guidance and consensus forecasts for revenues from Thomson Reuters, it can be calculated that the three groups' aggregate ratio of capex to revenue will be 10.3% in 2019. This is up slightly from 10.0% in 2018 and much higher than the 5% to 6% range of 10 to seven years ago.

The three groups are also much more profitable than earlier in the decade, with an aggregate operating margin climbing from just 0.4% in 2012 to a peak of 0.1% in 2017. This slipped to 8.3% in 2018 and is forecast to slip to 7.9% in 2019 (source: CAPA calculations based on consensus forecasts from Thomson Reuters). 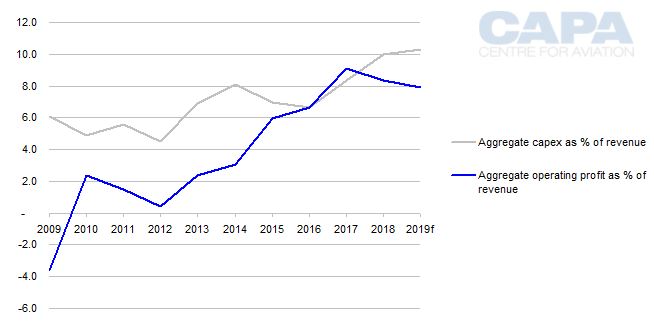 These margins remain high by historical standards, but Europe's big three legacy airline groups will be anxious that the divergence between capex and profitability trends does not continue.