European carriers’ shares were mixed on Wednesday (31-Mar-2010), as oil prices (+1.9%) gained again, to USD83.76. Wider markets were mostly down as investors remained concerned over Greece’s debt issues, following a disappointing bond sale the day prior. Shares were also down on data showing a drop in private sector jobs in the US in Mar-2010.

Lufthansa (-1.5%) called on pilots to cancel their planned four-day strike and re-enter negotiations, stating it could seek a legal injunction against the strike and would claim damages from the pilots’ labor union, Vereinigung Cockpit (VC), via the courts, if it goes ahead. The carrier will seek talks with pilots on whether the labour contracts apply to regional divisions or units abroad and also offered separate mediation with the VC over pay and job conditions. The carrier estimates that the four day strike could result in more the EUR100 million in losses.

SAS (-5.3%) took the biggest fall of the day, after stating the day prior that it expects a loss of EUR102.6 million in 1Q2010. SAS CEO, Albert Henschel, meanwhile stated during trading that yield is improving “slowly”, with demand for Premium seats, including Business and Economy extra also increasing “slowly”, although “significant” yield improvement is some time away.

Finnair (+5.8%) made the day’s biggest gain after CEO, Mika Vehvilainen, stated the first signs of demand improvement are visible, with positive signs in both Europe and Asia. However, Mr Vehvilainen added that this has not provided the carrier with a reason to change its 2010 guidance. Finnair expects to report a loss for Jan/Mar-2010, with profitability to improve towards the end of 2010. 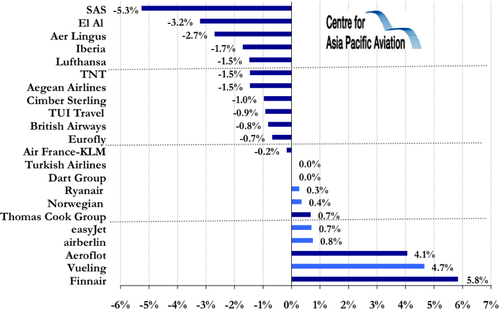