IAG’s launch of long haul low cost brand Level in Jun-2017 marks a major milestone on multiple fronts and highlights the evolution of business models in the dynamic airline industry. The “adapt or die” motto has never been so relevant as it is today. Business models are changing at a pace which may still seem ridiculously slow for other industries but is scary fast for most airlines.

Malaysia’s AirAsia X, the long haul offshoot of short haul LCC group AirAsia, launched a year later and quickly expanded to become the market leader among new generation long haul LCCs. However, it was not until 2012 that the model really started to gain steam and acceptance – from both independent LCC groups and full service airline groups.

Note: Lion took delivery of its A330s in late 2015; it previously operated 747-400s but these were not operated under a long haul low cost model
Source: CAPA – Centre for Aviation

The long haul low cost sector seems to have turned the corner and quieted the initial sceptics. It is no longer experimental and is becoming more mainstream. The fact all three main European airline groups – Air France, IAG and Lufthansa – have now joined the party is the biggest testament yet to the future of a model that until fairly recently seemed questionable.

Norwegian is launching a staggering 20 long haul low cost routes over a period of only four months (beginning of Jun-2017 to end Sep-2017). This includes 19 routes in the trans-Atlantic market for a total of 44 and one new route to Asia for a total of four. Norwegian’s long haul network will feature 26 destinations and 48 routes for the last month of the 2017 summer season (Oct-2017). 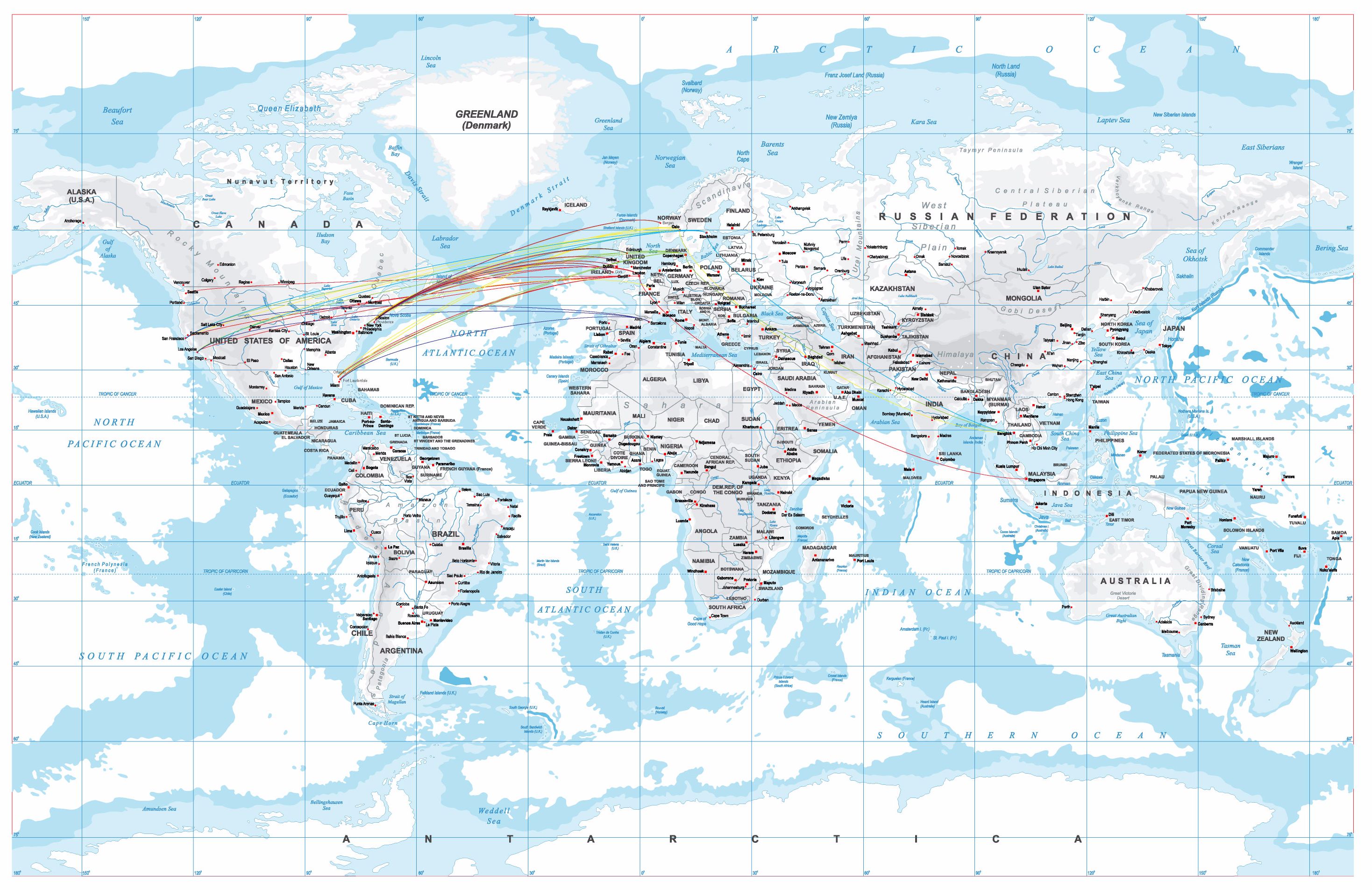 Norwegian will become the largest long haul low cost operator in terms of number of destinations and routes. Norwegian is also overtaking Scoot this summer to become the second largest long haul LCC based on seat capacity. Norwegian’s long haul capacity is increasing by nearly 80% this summer from approximately 49,000 weekly seats in May-2017 to approximately 87,000 weekly seats in Oct-2017. 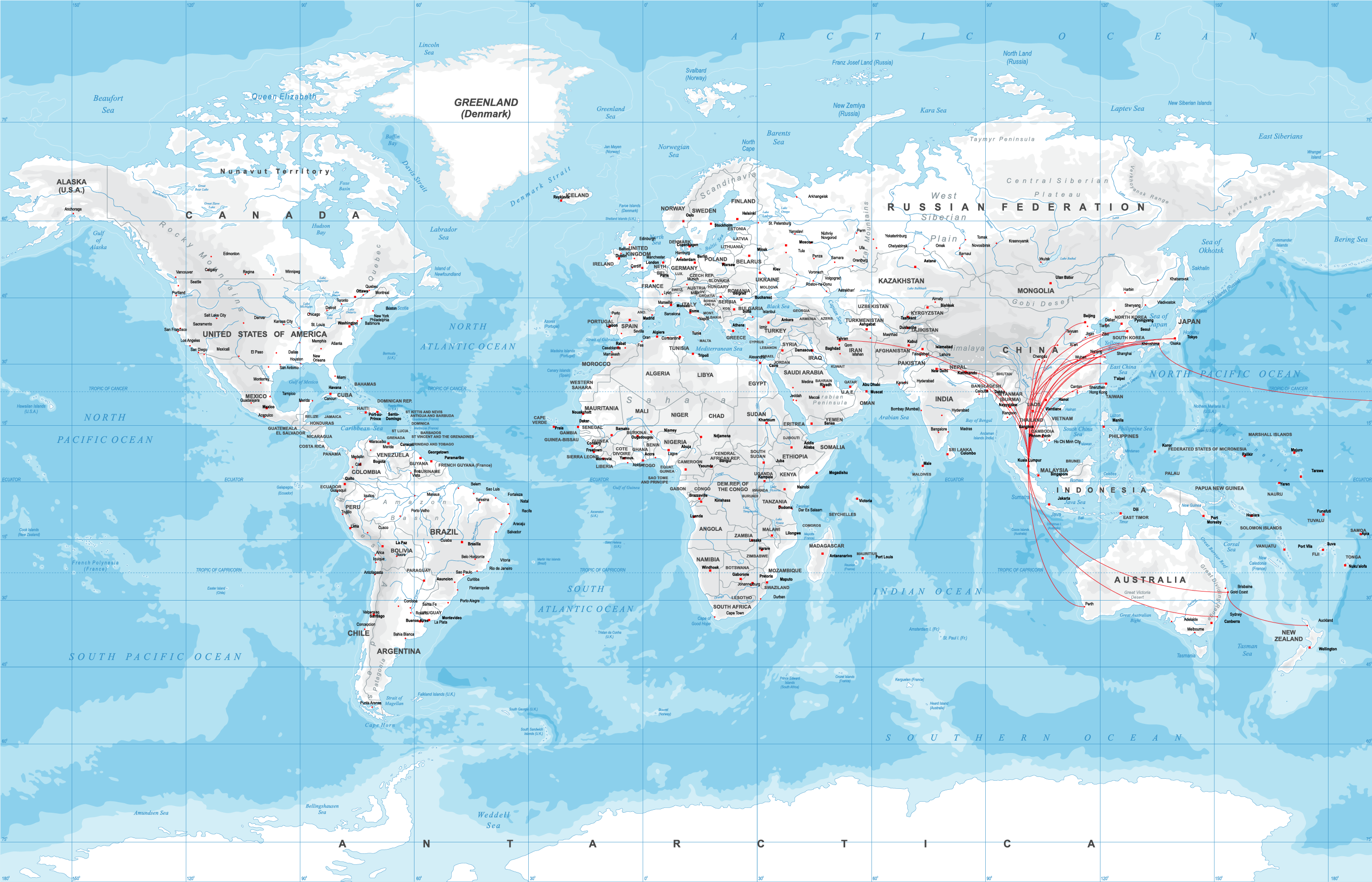 Notes: Gold Coast-Auckland is not counted under long haul low capacity as it is a short sector
Source: CAPA – Centre for Aviation & OAG

Eurowings has operated the longest LCC route in the world

Eurowings has had the distinction of operating the longest LCC route in the world since the end of 2015. Eurowings operates from Cologne to Bangkok and until Apr-2017 also operated the slightly longer route of Cologne to Phuket.

Norwegian initially had the distinction of operating the longest low cost route, from Jun-2013, when it launched services from Bangkok to Olso and Stockholm, until late 2015. Copenhagen to Los Angeles, a slightly longer route by distance, was launched by Norwegian in Mar-2014 and is currently Norwegian’s longest route.

Barcelona-Buenos Aires is slightly shorter in terms of distance than London-Singapore and similar in terms of block time (with the eastbound leg in both cases one hour shorter than the westbound leg). Paris-La Reunion, which is being launched on 16-Jun-2017 by independent long haul LCC French Blue, will be the third largest long haul low cost route in the world followed by Cologne-Bangkok and Singapore-Athens. Scoot is launching Singapore-Athens on 20-Jun-2017.

Longest route for each long haul low cost operator: as of end Sep-2017

Notes: based on schedules for the week commencing 25-Sep-2017
Source: CAPA – Centre for Aviation & OAG

Singapore-London is also longer than Hong Kong-London and Hong Kong-Vancouver, which were served by Oasis Hong Kong. Oasis was an independent long haul low cost airline which suspended operations in 2008. AirAsia X initially launched services to London in early 2009. AirAsia X is aiming to relaunch Kuala Lumpur-London Gatwick services – potentially as early as 2H2017 if it decides to lease 777s, and at the latest in 2019, when it plans to take delivery of new generation A330-900neos. However, AirAsia X will not regain the distinction of operating the longest LCC route in the world because Singapore-London is longer.

The route is nearly 1,000km longer than London-Singapore. Cebu Pacific is now evaluating new generation long haul aircraft which would be capable of operating in high density configuration from Manila to Los Angeles, as well as on slightly shorter routes from Manila to San Francisco and Vancouver. However, Cebu Pacific is not planning to make a decision on new long haul aircraft until 4Q2017 or 2018 – and deliveries are not likely until at least 2019.

While long haul LCCs are starting to operate more routes of 10 hours or longer, the overwhelming majority of their routes are in the 5 to 10 hour range. Several airlines, including AirAsia X, do not currently have any routes over 10 hours. 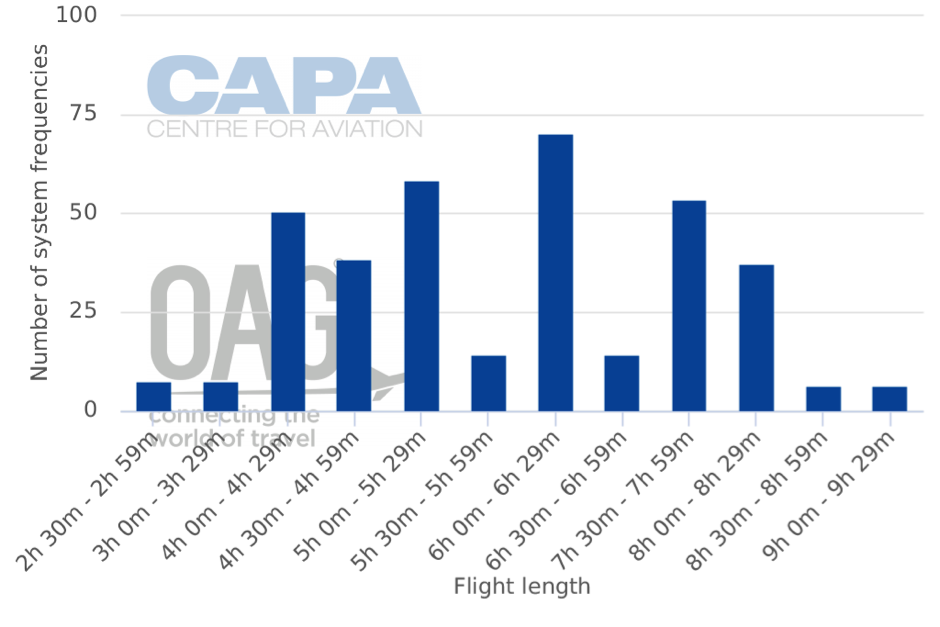 Notes: only includes Malaysia AirAsia X; excludes Thai AirAsia X
the only route under four hours is Gold Coast-Auckland, which is operated as a tag on Kuala Lumpur-Gold Coast and is not counted under its long haul capacity based on schedule for week commencing 8-May-2017
Source: CAPA – Centre for Aviation & OAG

Scoot’s longest route prior to the 20-Jun-2017 launch of Athens was also Jeddah. Athens is being operated with a new sub-fleet of 787-8s that have been outfitted with crew bunks and six fewer passenger seats. Scoot was essentially a medium haul operator before Athens with a few short haul routes (not counted under the long haul low cost capacity figures). 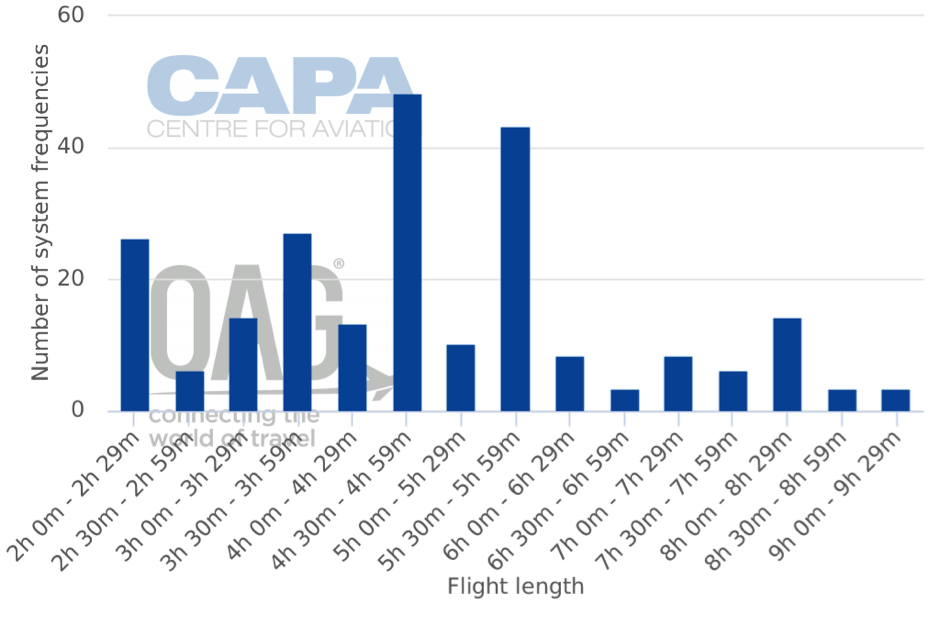 Note: based on schedules for week commencing 8-May-2017
Source: CAPA – Centre for Aviation & OAG

Routes of five to 10 hours have so far been the sweet spot for the long haul low cost model. The economics of medium haul routes are generally more attractive than long haul routes.

With true long haul routes the cost cap between and low cost and full service operators narrow as fuel becomes a larger share of the total cost. Long haul markets have also become very competitive, making it difficult for a new LCC entrant to offer prices that are significantly lower enough than full service airlines to stimulate demand without sacrificing profitability.

The number of routes with competition from multiple long haul low cost operators is also starting to increase as the sector expands and airline groups respond strategically in certain markets. The fact two of Level’s initial routes are also being launched by Norwegian is an indication of the intensifying competition between long haul low cost operators. IAG’s decision to launch Level came just a few months after Norwegian decided to open a long haul base at Barcelona.

Previously there were just two routes in the world served by more than one long haul low cost operator – Melbourne-Singapore (Jetstar and Scoot) and Toronto-London Gatwick (Air Canada Rouge and WestJet). Osaka-Honolulu will mark the first route AirAsia X and Scoot will compete directly.

The fastest expansion is likely to come in Europe, driven by Norwegian, Level and Air France’s Buzz. Scoot and AirAsia X are also expected to focus on expanding in Europe over the next few years – in part a response to their new European based competitors and partially driven by the fact routes to Australia and North Asia are starting to become saturated.

Norwegian could potentially surpass AirAsia X as the world’s largest long haul airline by the end of 2018, particularly as the Malaysian carrier is not planning to pursue significant expansion until early 2019 – when it receives it first batch of new A330-900neos. Norwegian is planning more rapid long haul expansion in 2018 as several more 787-9s and 737 MAX 8s are delivered. Another spate of new Asia and US routes along with the launch of long haul services to South America is expected in 2018.

More expansion is planned for 2019 as Norwegian starts to take deliveries of the A321neoLR – a new narrowbody type with even more range than the 737 MAX 8. Norwegian is taking delivery of its first batch of 737 MAX 8 aircraft in 2Q2017 and using the new type to launch 12 routes in summer 2017 from three secondary airports in the northeast US to six smaller gateways in Ireland, the UK and Norway.

These are among the 20 long haul routes being launched by Norwegian in summer 2017 and are the first long haul low cost routes to be operated with new generation narrowbody airraft.

They open up potential new long haul routes which are too thin for widebody aircreaft. The new A320neo and 737 MAX families also enable LCCs to increase seat density on short haul routes, resulting in improved efficiency and reduction in unit costs.

Cost reductions are particularly important for ULCCs, another business model that has emerged in recent years and is starting to become more mainstream. The ULCC model is spreading this year to Canada and South America. Indigo Partners, which brought the ULCC model to the US initially with Spirit and more recently Frontier, is now looking at potential ULCC opportunities in Asia.

The Asia Pacific region has been a testing ground for new airline models including long haul low cost and hybrids. However, Asia does not yet have any ULCCs. Infrastructure constraints and a lack of secondary airports are obvious barriers in Asia but market conditions are favourable including a rising a middle class.

Competition is intense in Asia, including between LCCs

This has resulted in overcapacity and unsustainably low yields in many markets. However, the LCCs now operating in the region are generally not true to the LCC model. Several Asian LCCs are now owned by full service airline groups, leading to a dilution of the typical LCC model.

Multi-brand strategies at several of Asia’s full service airline groups have generally been successful, enabling growth that would not be achievable otherwise and providing an important strategic response to independent LCCs. However, the LCCs they control do not follow pure LCC models.

Several Asian LCCs – including subsidiaries under FSCs and independents – have adopted hybrid models. The hybrid model has gained momentum over the last several years – not just in Asia but globally. However, in some market it has left a potential gap at the bottom end of the market.

Meanwhile at the top end of the market, several airline groups are increasing their focus on premium services. Several airlines are now investing in new generation business class seats and other premium products. While an increasing number of these same airlines are also dabbling in new models such as long haul low cost, they recognise they must continue to innovate at the top end of the market to survive.

A multi-brand strategy enables airlines airline groups to have a wide range of solutions to different segments of the market and best respond to a global marketplace that is becoming increasingly competitive and crowded. In today’s environment airlines must adapt quickly and not be afraid to implement new business models.