Lion Air has an opportunity to win back market share in Indonesia’s dynamic low-cost sector as competitors slow their expansion and in some cases reduce capacity. Lion in 2013 recorded the lowest rate of traffic growth among Indonesia’s four LCCs as its share of the Indonesian LCC market dropped from over 78% in 2012 to about 71%.

Lion also has quietly slowed its growth by retiring 737 Classics and switching 737-900ER orders to smaller 737-800s. But Lion has not followed rival LCC groups AirAsia and Tigerair in deferring or cancelling orders. The group will account for about three quarters of the aircraft being delivered to Indonesia’s LCC sector in 2014, putting it in position to make market share gains.

Indonesia’s LCC sector has grown by nearly 80% since 2010

Lion and its regional subsidiary Wings Air, which also operates under the LCC model, transported a combined 37.7 million passengers in 2013, according to Lion Air Group figures provided to CAPA. This represents 15% growth compared to the 32.9 million passengers Lion and Wings flew in 2012. Lion Air, which predominantly operates 737s, recorded passenger traffic growth of 13% to 34.1 million while Wings, which operates ATR 72 turboprops, grew passenger traffic by 35% to 3.6 million. (These figure include domestic and international passenger numbers although Lion is predominately a domestic operator and has only about 1 million international passengers per annum.)

While Lion and Wings accounted for nearly half of the 11 million additional passengers transported last year by Indonesian LCCs their share of the total market slipped as the growth rates at their three LCC competitors was faster. Indonesia AirAsia recorded 34% growth in 2013 to 7.9 million passengers while Citilink recorded 87% growth to 5.3 million passengers.

Tigerair Mandala, which began operations in Apr-2012, saw traffic grow from just under 350,000 passengers in 2012 to 1.9 million passengers in 2013. (All three carriers report traffic as part of group reports from AirAsia, Garuda and Tigerair. Indonesia AirAsia and Tigerair Mandala have relatively equal size domestic and international operations while Citilink was entirely a domestic carrier until Mar-2014.) 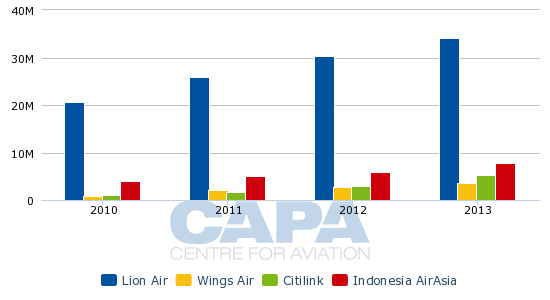 Note: *Mandala declared bankruptcy and suspended operations in Jan-2011. It re-launched under new ownership and emerged from bankruptcy in Apr-2012.
Source: CAPA – Centre for Aviation, INACA and company reports

Indonesia AirAsia’s share of the market was up slightly from about 14% in 2012 to about 15% in 2013. Lion Air remained the market leader but saw its share slide from about 72% to under 65%. Wings’ share also slipped slightly, from 6.8% to 6.3%, giving Lion and Wings a combined 71.4% share in 2013 compared to 78.4% in 2012. (Foreign LCCs that serve Indonesia are excluded from these figures including other AirAsia, Lion and Tigerair affiliates.)

The drop for Lion represented the second consecutive year of market share falls. In 2011 Lion and Wings combined accounted for an 80.8% share of total passengers carried by Indonesian LCCs.

While Lion has been striving to increase its share in the Indonesian market, it will not be too alarmed by the recent trend as it is more driven by competitor expansion that is not likely to be sustainable. A drop in Lion’s share of the Indonesian LCC market was inevitable given the Apr-2012 re-launch of Mandala, which had suspended operations in Jan-2011, and Garuda's near-simultaneous decision to accelerate expansion at Citilink, which had been a very small carrier. Back in 2011, with Mandala suspended, Lion was able to grow its share of the Indonesian LCC market by 7 percentage points compared to 2010.

The 2013 market share figures for Lion also exclude its Batik Air subsidiary because Batik operates under the full-service model. Batik launched operations in May-2013 and transported 800,000 passengers in 2013. Batik is an important component of Lion’s goal to increase its share of the total domestic Indonesian domestic market (LCC and full-service) to 60%, up from about 45% in 2012. (Official domestic Indonesia traffic figures for 2013 are not yet available but the Lion Air Group’s share likely remained at approximately 45%.)

All of Indonesia’s LCCs have benefited from consolidation in the full-service sector, which has accelerated overall growth in Indonesia’s LCC penetration rate. LCCs currently account for nearly 60% of system-wide seat capacity in Indonesia.

Lion is also now benefitting as some of its competitors slow down expansion and cut capacity. The biggest cutbacks have been at Tigerair Mandala, which is currently only operating 10 daily return flights on eight routes compared to 28 daily return flights on 19 routes at the beginning of 2014. As CAPA reported on 5-May-2014, Tigerair Mandala is now in the process of grounding five of its nine A320s, leaving it with a fleet of only four aircraft. Tigerair Mandala earlier cancelled commitments to add three A320s to its fleet in 2014 for a total of 12 aircraft.

Number of Indonesian LCC players could be reduced to three

The Tigerair Group is currently considering selling its 40% stake in Mandala, which is also owned by Indonesian investment firm Saratoga. A sale to Citilink is one of the scenarios reportedly under consideration.

Indonesia AirAsia also has decided to halt fleet expansion in response to the challenging market conditions in Indonesia. As CAPA previously reported, Indonesia AirAsia has dropped earlier plans to add six A320s in 2014 and will now keep its fleet flat at 30 aircraft. The carrier is still planning some expansion in the international market but this will come at the expense of domestic capacity cuts.

Citilink still plans to add eight A320s in 2014 for a total 32 aircraft and also has been increasing capacity by improving aircraft utilisation rates. With the big cuts at Tigerair Mandala and the slowdown at Indonesia AirAsia, Citilink’s share of the Indonesian LCC sector will again increase significantly in 2014. But the 87% passenger growth rate from 2013 will not be repeated. In Mar-2014 Citilink passenger figures were up a much more modest 18% year over year. 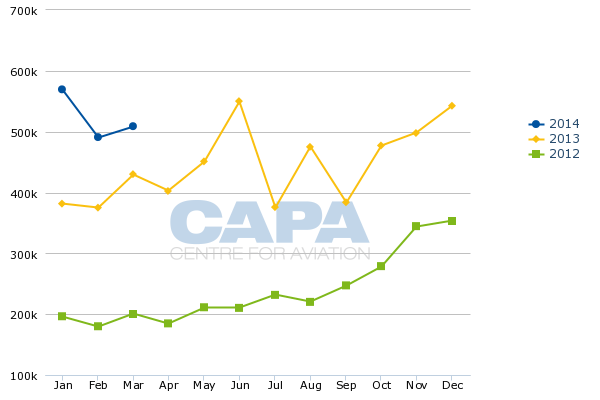 The Lion Air Group has repeatedly stated it has no intention of following AirAsia or Tigerair in deferring or cancelling orders. The group says it still plans to take delivery of 50 to 52 aircraft in 2014, including 30 to 32 737NGs, 14 ATR 72-600s and six A320s.

All six of the A320s and four 737-800s have been allocated to full-service subsidiary Batik Air, leaving the group with 40 to 42 deliveries for Southeast Asia’s LCC sector.

Of these 40 to 42 aircraft, about 15 will end up outside Indonesia. Thai Lion plans to grow its fleet in 2014 from two to nine aircraft while about eight aircraft are likely to be added by Malaysian affiliate Malindo Air.

Through the first five months of 2014 Lion Air has taken delivery of six 737-800s while removing from service four 737-300/400s. The removal of these aircraft were not part of the initial Lion Air Group fleet plan for 2014. The group had previously indicated it planned to keep some 737-300/400s active for use on thin routes to smaller regional destinations and as spares for its 737NGs.

Lion initially had a fleet of 10 737-300/400 Classics. The other six aircraft were parked earlier, primarily during 2013, although Lion had previously said some of these aircraft could be reactivated. Lion now says it could still potentially bring back two of the 737 Classics as spares or standby aircraft. But this seems unlikely given the efficiencies that come with operating an all-737NG narrowbody fleet.

The aircraft retirements in 2013, coupled with the allocation of a large chunk of deliveries to its three new affiliates and subsidiaries, resulted in a relatively modest expansion rate for Lion and Wings – at least modest given Lion’s normal standards. At Lion Air, the 17% growth in passenger traffic in 2013 marked the carrier’s slowest year over year growth rate since 2007. 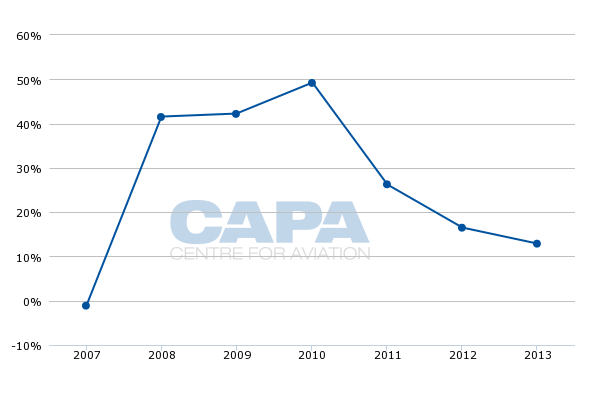 According to the CAPA Fleet Database, the Lion Group has changed another 18 of its outstanding 737-900ER orders to 737-800s. Several of these changes were made within the last few months.

While the Lion Air Group likes to point out it is not following its archrival AirAsia in slowing down expansion, the switch to 737-800s at its Lion Air subsidiary results in a slower rate of capacity growth. The decision to phase out the remaining 737 Classics, while sensible, also results in slightly slower capacity growth.

But the capacity growth rate at Lion should still easily surpass the Southeast Asia LCC market average in 2014, particularly in light of the recent adjustments at AirAsia and Tigerair. (Jetstar Asia also has decided to not pursue any capacity or fleet expansion in 2014.)

Factoring in all the recent adjustments by AirAsia and Tigerair the total LCC fleet in Southeast Asia is likely to expand by about 75 aircraft in 2014, with the Lion Group accounting for 35 or nearly half of all the additional aircraft. (These are net figures, accounting for new aircraft deliveries minus retirements.)

In Indonesia, Lion’s LCC fleet is now poised to grow by about 20 aircraft in 2014. The non-Lion LCC fleet in Indonesia, however, is now expected to only grow by three aircraft (factoring in the removal of five aircraft at Tigerair Mandala and the decision to not add any aircraft this year at Indonesia AirAsia).

2014 is shaping up to be a year of rationalisation for the Indonesian market, but Lion is steadily forging ahead with a long term strategy. The result will be an even more dominant market leader as Lion recovers its powerful position in the Indonesian LCC market, after ceding share over the last two years.