Indonesia’s emergence as one of the largest and fastest growing markets in Asia will be reinforced over the next couple of months as Garuda and Lion Air surpass Singapore Airlines (SIA) to become the largest carriers in Southeast Asia based on fleet size. As groups, Garuda and Lion will also end 2013 with more aircraft than the SIA Group and the AirAsia Group.

Reaching the 100-aircraft milestone is a significant achievement for both Garuda and Lion. The other major flag carriers in the region, Malaysia Airlines (MAS) and Thai Airways, also currently operate over 90 aircraft.

The SIA Group has stated it expects to have a fleet of 139 aircraft at the close of its current fiscal year, which ends on 31-Mar-2014. The fleet is projected to end calendar 2013 at 138 aircraft.

Source: CAPA – Centre for Aviation and company reports
Note: *The AirAsia figures exclude AirAsia X and new Philippine partner Zest as these carriers are not part of the AirAsia Group. When including these two carriers, the fleet in Southeast Asia under the AirAsia brand is expected to reach 168 aircraft at the end of 2013.

The fall of SIA from the top of the list is a reflection of the shifting dynamics of the Southeast Asia market. Strong demand for regional and low-cost services has been the main drivers of growth in the Southeast Asian aviation market for the last decade. SIA, which has pursued very limited growth at its mainline operation over this time period, has responded by launching new long-haul low-cost carrier Scoot and accelerating expansion at full-service regional subsidiary SilkAir. But its competitors in Indonesia are growing much faster, taking advantage of their strong position in one of the world’s fastest-growing emerging markets.

SIA will continue to be the leading airline group in the region from a standpoint of revenues, driven by its much larger long-haul operation and focus on premium products.

While high profile, fleet sizes can be a bit misleading. SIA continues to be an all-widebody operator while almost the entire Lion fleet is narrowbody (it has two 747-400s). Garuda has only 20 widebodies although it is in the process of adding several additional A330s and 777-300ERs. The AirAsia Group also only operates A320s although there are widebodies at sister long-haul carrier AirAsia X, which will have 18 A330s by the end of 2013.

Garuda reported in its operating performance update for Jul-2013 that its fleet as of 31-Jul-2013 consisted of 98 aircraft at Garuda mainline and 29 aircraft at Citilink, including seven 737-300/400s that are in the process of being phased out. In the last week of Aug-2013, Garuda took delivery of an additional 737-800 and an additional Bombardier CRJ1000, according to the CAPA Fleet Database. The two recent deliveries gave Garuda exactly 100 aircraft, joining SIA as the only individual carriers in Southeast Asia with over 100 active aircraft.

Source: CAPA Fleet Database
Note: *orders include aircraft ordered directly with manufacturers and new aircraft which leasing companies have announced will be placed into Garuda

The Garuda Group is projected to take over 20 additional aircraft in the remainder of 2013, according to the CAPA Fleet Database. The net increase for the group is expected to be 10 aircraft, to 139, as 737 Classics are removed at both Citilink and Garuda mainline. 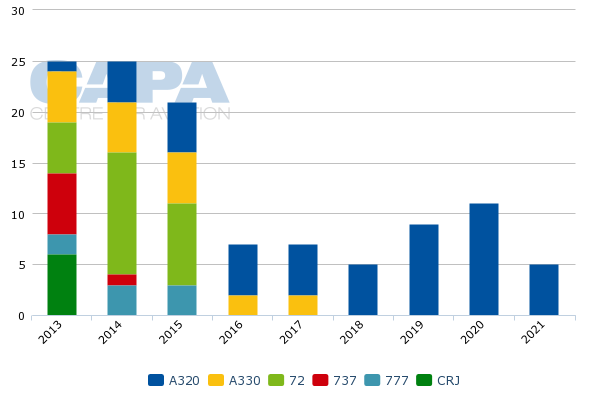 Source: CAPA Fleet Database
Notes: includes aircraft ordered directly with manufacturers and new aircraft which leasing companies have announced will be placed into Garuda
*2013 delivery figure includes only aircraft which have not yet been delivered as of 5-Sep-2013

Lion currently operates 98 aircraft and plans to take delivery of two more 737s in 4Q2013. There is a possibility that the delivery of the carrier’s 100th aircraft could pushed back to early 2014 depending on how quickly the application for the group’s new affiliate in Thailand proceeds. But even if Thai Lion takes an aircraft now earmarked for Lion, the Indonesian carrier will still reach the 100th aircraft milestone in 1Q2014 and quickly surpass SIA and eventually Garuda. Thai Lion has already bee allocated two of the six 737s that the group is slated to receive in 4Q2013.

Source: CAPA – Centre for Aviation and Lion Air*
Note: *The CAPA Fleet Database currently lists five of the eight 737-400s as in storage but Lion Air considers the aircraft part of its active fleet and says they are only temporarily out of service for maintenance and repairs.

The Lion Group has been taking delivery of 737s at a rate of two per month in 2013. But 14 of the 24 aircraft have been allocated to other carriers in the group. Lion’s new Malaysian affiliate, hybrid carrier Malindo Air, just took its fifth 737-900ER and expects to take one more by the end of Sep-2013 (having been allocated both of the group's 737 deliveries for Sep-2013). Lion’s new full-service carrier in Indonesia, Batik Air, also has taken four 737-900ERs so far this year and is slated to take two more by the end of 2013. Malindo launched services in Mar-2013 while Batik launched in Apr-2013.

Malindo also operates three ATR 72s with a fourth ATR 72 slated for delivery in Oct-2013. The Lion Group has been taking delivery of new ATR 72s this year at a rate of one per month. Its low-cost regional subsidiary Wings Air is the group’s other ATR operator.

Wings Air currently has an all-ATR 72 fleet of 24 aircraft, having recently phased out its fleet of Dash 8 turboprops. The carrier is slated to take another three ATR 72s over the next four months and end 2013 with a fleet of 27 aircraft. (Wings and Lion previously also operated MD-80s but phased out the type earlier this year.)

The 145 aircraft spread across four (and perhaps five) carriers at the end of 2013 will make Lion the largest airline group in Southeast Asia based on fleet size. This is hardly surprising given the massive number of orders it has placed in recent years. Lion in Mar-2013 placed orders for 234 A320s, supplementing an order book which at the time already included over 320 additional 737s and 38 additional ATR 72s. 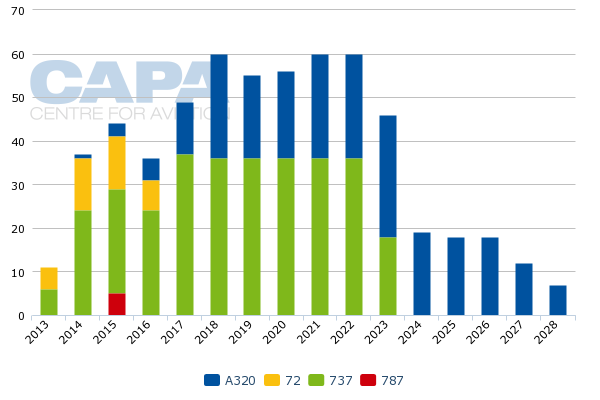 Source: CAPA Fleet Database
Note: *2013 delivery figure includes only aircraft which have not yet been delivered as of 5-Sep-2013

The Lion Group typically allocates deliveries among its subsidiaries and affiliates about six months ahead of time. Malindo says it expects to take delivery of another 10 aircraft in 2014. Thai Lion will also likely take about 10 aircraft. The new carrier could launch at the end of 2013 or early 2014, depending on how quickly it is able to secure an air operators' certificate from Thai authorities. That should leave about 17 aircraft for the Indonesian market, split between Batik, Lion and Wings.

The group also has the option of using its Singapore-based leasing subsidiary Transportation Partners to market aircraft to potential third party customers. But this is unlikely to occur in 2014 given the growth needs of the five carriers in its portfolio, particularly the three new carriers Malindo, Batik and Thai Lion.

As Lion is not planning at this point to phase out any of its older aircraft (it still has 10 737-300/400s and two 747-400s), the group should end 2014 with 182 aircraft. Given its huge order book and the expected ramp up in delivery rates to 60 narrowbodies per annum (including 36 737s and 24 A320s), the group is assured it will maintain its soon to be achieved status as largest airline group in Southeast Asia based on fleet size.

The AirAsia Group also has a huge order book, which currently consists of 351 additional A320s, according to the CAPA Fleet Database. But it falls nearly 200 aircraft short of the 547 additional narrowbodies the Lion Group currently has on order. AirAsia also will start allocating some of its aircraft outside Southeast Asia as AirAsia India, which is aiming to launch operations in late 2013, ramps up. 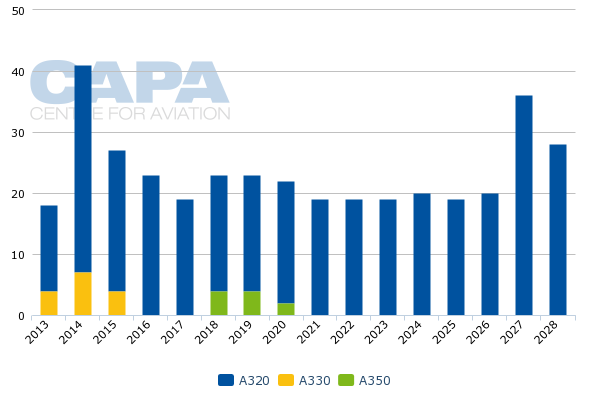 Source: CAPA Fleet Database
Note: *2013 delivery figure includes only aircraft which have not yet been delivered as of 5-Sep-2013

The Garuda Group currently has an order book of 115 additional aircraft, according to the CAPA Fleet Database. This should be sufficient to make it over the medium to long term the third largest Southeast Asian airline group. The SIA Group has a bigger order book – about 200 aircraft, including 55 at SilkAir and 20 at Scoot. But as over half of these aircraft will likely be used for replacements, SIA is unlikely to catch up with Garuda, AirAsia or Lion once it is overtaken by these groups.

Ambitious Lion is just getting going

Lion Air closing in on the 100-aircraft milestone and the Lion Group becoming the largest airline group in Southeast Asia by fleet is just the tip of the iceberg. The group is well positioned for further expansion in Indonesia, where it controls about 50% of one of the world’s biggest and fastest growing domestic markets.

As CAPA wrote in Mar-2013: “Given the projected growth of the Indonesian domestic market, the Lion Air Group will need approximately 300 aircraft in Indonesia by 2018 simply to maintain its current share of the market. As Lion has ambitions to grow its domestic market share and to become a more significant player in Indonesia’s international market, a 400 aircraft fleet by the end of 2018 in Indonesia between its Lion, Wings and Batik brands is a feasible scenario.”

Lion faces bigger challenges as it launches and ambitiously expands in new markets such as Thailand. It also still needs to prove it has a sustainable business case in Malaysia, where it is battling stiff competition from Malaysia Airlines and AirAsia.

But Lion has the scale, the cost structure, the ambitions and the order book to be a tough competitor. Once its group fleet becomes the largest in Southeast Asia – an accomplishment it should achieve within the next month – there will be no turning back.