LAN down despite reports of potential share sale; Alaska Air, Hawaiian Airlines up

The wider market meanwhile rose for its third consecutive day, with the Dow (+0.8%) up on another day of positive results for companies and gains in the manufacturing sector. However, gains were kept in check by disappointing US jobs and inflation data.

Fellow full service carriers, American Airlines (-2.4%) and Continental Airlines (-2.1%) were also down at the end of trading.

Other stories available in today’s America Airline Daily include: 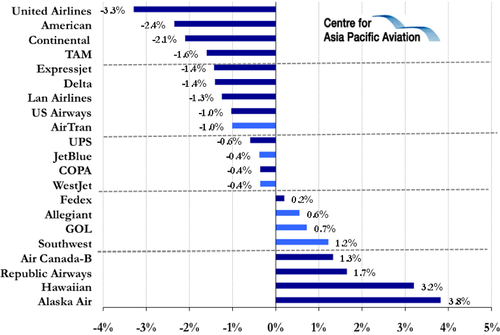