Kingfisher Airlines, in a remarkable turn of events, has slipped from being India’s largest domestic carrier to its smallest in the space of only six months amid significant network rationalisation by the struggling carrier as part of its ‘holding plan’. This is a marked turnaround for Kingfisher, which was the largest stand-alone carrier in the market in the first nine months of 2011 with a high of 20% market share in Apr-2011.

According to the latest Indian Directorate General of Civil Aviation (DGCA) data, Kingfisher held only a 6.4% market share in Mar-2012, surpassed even by JetLite with a 7.1% market share and GoAir with a 7.5% market share. GoAir has been the smallest domestic carrier in the Indian market since Aug-2010, with Paramount previously holding this position.

Kingfisher Airlines will likely remain as the nation’s smallest carrier in the coming months, as it continues its much-curtailed summer 2012 schedule, operating approximately 120 daily services with 20 dedicated aircraft of which only 16 may be fully operational.

The carrier confirmed this is a "holding plan" put in place pending re-capitalisation and a return to full utilisation of the aircraft fleet. Jet Airways is one of the leading beneficiaries of the developments at Kingfisher Airlines, as it has been able to increase its corporate travel market share, with yields understood to have benefited from the capacity cutbacks by Kingfisher Airlines.

The severe cutbacks by Kingfisher Airlines have put a break on growth in the domestic market, which increased 1.1% year-on-year in Mar-2012 to 4.87 million passengers. This marks the slowest month of domestic passenger growth since May-2009 when passenger levels declined 4.4%. Passenger traffic increased 6.55% in 1Q2012 to 15.3 million. While the market has now seen 34 consecutive months of year-on-year growth, the result for Mar-2012 marks the third month of single-digit growth in the past four months. This was preceded by 16 months of double-digit growth between Sep-2010 and Nov-2011. 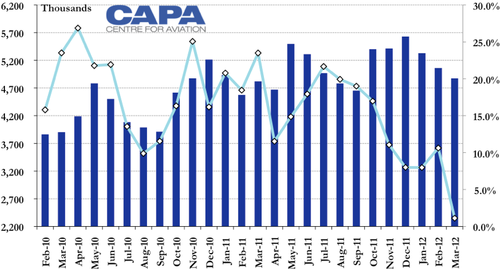 Up until last month, India's growth rate was among the highest in the world with double-digit increases in passenger carriage, supported by strong domestic demand and economic growth continuing to support air travel.

India's Minister of Civil Aviation, Ajit Singh, last month noted that air traffic in India has witnessed compounded annual growth of 16.5% during the 2004/05 to 2010/11 period, with domestic traffic reporting a cumulative annual growth rate of 18.5% and international traffic witnessing growth of 14% over this period. Total weekly services on the domestic network increased from 8724 in 2006 to 12,107 in 2011 and the number of airports handling scheduled air services increased from 50 in 2000 to 82 in 2011. Total domestic passengers carried by all scheduled and non-scheduled operators have increased from 36.2 million in 2006/07 to 60.7 million in 2011 (calendar). The Minister noted this "has happened with a reduction in airfares over the last seven years and introduction of new routes, which made air travel affordable for the common man". 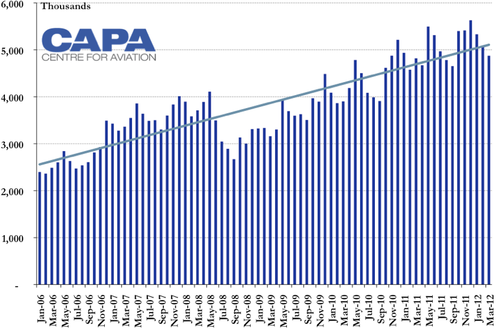 While the most dramatic passenger growth is generally reported by the LCCs, this was not the case in Mar-2012. While SpiceJet experienced growth of 28.1%, and GoAir (+11.5%) and IndiGo (+13.6%) also witnessed double-digit growth, Air India and Jet Airways capitalised on the situation at Kingfisher Airlines, which saw a 67.5% year-on-year slump in domestic passengers. Jet Airways reported strong growth of 26.5% in the month, with this also reflecting a movement of JetLite operations into JetKonnect, which reports traffic under the Jet Airways Group (as a result JetLite traffic declined 6.6%). Air India reported double-digit passenger growth of 21.5% in the month. 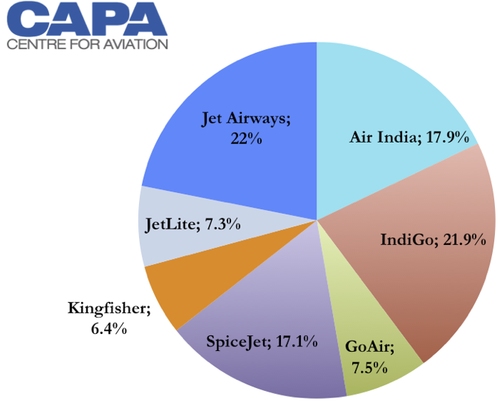 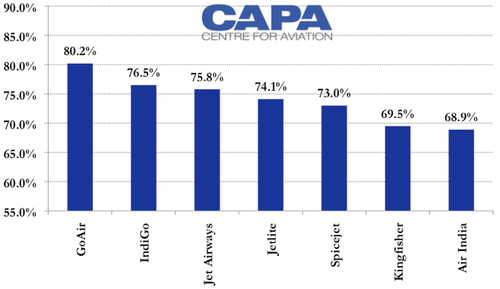 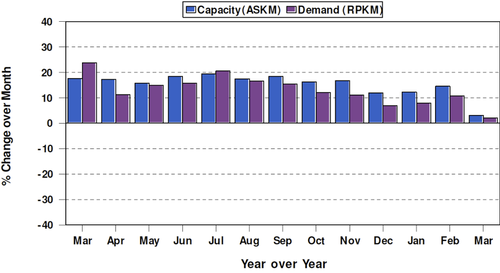 Robust growth in 2011 fails to translate into profits

As previously noted by CAPA, growth in the Indian market has failed to translate into profits for India's airline industry, where all the major carriers except IndiGo are loss-making.

CAPA estimates Indian carriers combined lost USD2.5 billion in the 12 months ended 31-Mar-2012. This is on total revenues of just under USD10 billion – a worse result than even FY2008/09, when traffic was declining and fuel prices spiked at USD150/barrel.

IATA, in its global traffic results for Feb-2012, similarly noted that strong traffic growth in Feb-2012 among India’s carriers "masks financial weakness resulting from high operating costs and taxation". India experienced the second strongest growth among the major domestic markets at 12.3% in Feb-2012.

India's domestic aviation market expansion has been among the strongest in the world, tripling in the past five years to 2011, according to IATA, to become the ninth largest aviation market in the world. Given the strong market fundamentals, the robust rate of growth is expected to continue with the Indian Ministry of Civil Aviation’s Vision 2020 statement envisaging a compound annual growth rate of around 15% in the next five years.

However, domestic passenger growth will likely slow in 2012 to under 10% as Indian aviation faces its most critical challenges in 2012 since the advent of the 2004 industry reforms. The key challenge going forward, amid an environment of slowing GDP growth, will be to ensure yields and profitability are maintained as the carriers’ cost bases are pressured. At the same time, the nation’s full service carriers continue to suffer under the burden of approximately USD16 billion in debt, ensuring financial recovery will be slow in India’s aviation market.

Both capacity reductions and fare and load factor increases are likely in 2012, as the industry recognises that it is better to have 10% growth and be profitable instead of growing at 20% and lose USD2.5 billion. Improved profitability at airlines will also have a positive impact on airport operators, who are facing large non-payment in dues by airlines.

In the longer-term, Mr Singh expects air passenger traffic will witness an increase from over 143 million passengers in 2010/11 to over 293.48 million in 2017/18. India is poised to emerge as the world’s third largest aviation market by 2020. In 2012, traffic at the nation’s airports is estimated by CAPA to exceed 150 million passengers, and to grow to reach 450 million passengers (360 million domestic and 90 million international) along with 6.5 million tonnes of cargo by 2020. This would make India the third largest aviation market in the world by which time India is expected to generate more than 30 million annual outbound departures and more than 13 million inbound visitors.

These type of growth rates reflect underlying optimism about the future of aviation in India provided structural issues can be addressed. As noted by Mr Singh, "The skies are not expected to clear any time soon and 2012 could prove to be equally challenging. As per the market estimates European airlines are going to be hit the hardest in 2012. It is expected that Asia Pacific would provide the boost to the sector that it badly needs. This is expected to be led by expanding Indian and Chinese markets." He noted that aviation's centre of gravity was moving eastward, adding that India offers enormous opportunities and potential for aviation companies worldwide.

However, in the current year, India’s domestic aviation sector is a tough place to be. All three listed carriers have been weak performers, both financially and on the stock exchange in 2011, as a steep increase in their cost base and lack of pricing power has translated into increasing losses and financial pressures. Meanwhile, as the domestic market continues to see an increase in passenger volumes, pricing continues to be weak despite recent improvements in light of cutbacks at Kingfisher Airlines and cost pressures remain high due to high fuel prices, the depreciation of the Rupee and upcoming increases in airport charges. However, with capacity growth slowing in 2012/13, yield improvement will likely follow and the nation’s airlines will benefit from the Government’s willingness to address structural distortions to assist the sector.