Load factor was also up slightly, rising 0.5 ppts, to 66.2%, on the back of a 10% rise in traffic (RPKs) and a 9% increase in capacity (ASKs). The carrier attributed the improvement in traffic to the launch of seven new destinations and the reinstatement of frequencies to a number of existing routes whose operations had previously been cut due to the global financial downturn.

Elsewhere in Africa, both Comair and 1time Holdings were flat, while Lonrho (+1.8%) was the day’s only gainer.

In the Middle East, Royal Jordanian (-0.5%) Chairman of the Board of Directors, Naser Lozi, announced over the weekend that the carrier aims to increase the number of passengers and revenues, in addition to boosting its financial position in 2010. Mr Lozi stated the carrier plans to resume service to Kuala Lumpur in Jun-2010 (frequency and launch date not disclosed). The carrier plans to take delivery of two A330s in May-2010 and an E-175 in 4Q2010. Mr Lozi added the final phase of building RJ's headquarters in Amman is expected to be completed by 1Q2011.

Air Arabia (+0.5%) gained, despite CEO, Adel Ali, confirming the carrier plans to delay the launch of its Alexandria (Egypt) JV from Apr-2010 until May-2010. The Alexandria hub will be the carrier's third hub, after Sharjah and Morocco. Mr Ali stated the carrier has "yet to get final clearance to operate from Alexandria", adding the aircraft to be used for the services is being registered in Abu Dhabi, with a full maintenance check being completed prior to "a few days of tests" in Egypt. Air Arabia has not yet announced the destinations to be served from the Egypt hub. 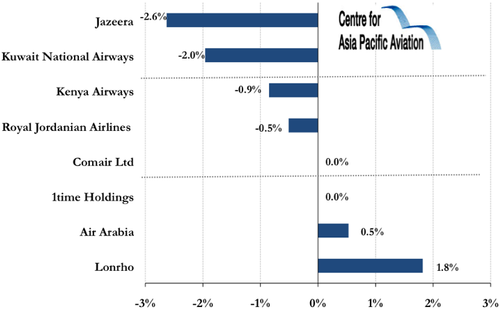