Traffic growth in Kazakhstan has slowed significantly due to a sluggish economy and currency depreciation impacting local demand. Passenger traffic in Kazakhstan increased by only 1% in 2016 and the market would have contracted if it were not for a significant increase in transit traffic at flag carrier Air Astana.

Kazakhstan aviation authorities expect another year of anaemic growth in 2017 despite a surge in visitor numbers anticipated for EXPO 2017, which will take place this summer at the capital Astana. The Astana Airport is opening a new international terminal just ahead of EXPO, which will enable Air Astana to pursue further growth in transit traffic in the coming years.

Sixth freedom traffic, which accounted for approximately 10% of total international traffic in Kazakhstan in 2016 compared to only 5% in 2015, could drive a new phase of growth for Air Astana and the Kazakhstan market overall. Proceeds from Air Astana’s planned initial public offering (IPO) could be used to accelerate fleet and network expansion with a focus on transit traffic but the airline will have to overcome relatively challenging market conditions, including intensifying competition from both local and foreign airlines.

Kazakhstan recorded passenger growth of only 1% in 2016

Total airport traffic in Kazakhstan grew by only 1% in 2016 to 12.2 million, according to Kazakhstan Civil Aviation Committee data. Another year of slow growth is expected in 2017 with Kazakhstan aviation authorities projecting 12.4 million passengers across all airports, which would represent growth of less than 2%.

Kazakhstan authorities expect the local airline sector to carry 6.2 million passengers in 2017, which would represent growth of approximately 3%. The economic situation in Kazakhstan has improved somewhat, with the value of the tenge recovering partially, and visitor numbers should spike this summer due to EXPO 2017. However, local demand remains relatively weak and the tenge is still down 40% compared to two years ago.

Kazakhstan annual passenger traffic for airports and local airlines: 2013 to 2017*

Note: Figures represent totals of all airports and all Kazakhstan based airlines combined.
Source: Republic of Kazakhstan Civil Aviation Committee.

The Kazakhstan market had experienced six years of rapid growth from 2009 to 2015. The rate of annual growth for 2010 through 2015 was consistently at least in the high single digits and, in some years, was in the double digits. Total airport traffic in Kazakhstan was up 10% in 2015 and 7% in 2014.

Kazakhstan recorded strong GDP growth during most of this period, leading to strong domestic and outbound international demand for air travel. Kazakhstan has historically been primarily an outbound market with limited tourism and transit traffic.

A significant slowdown in economic growth (the Kazakhstan economy relies heavily on the oil and gas sector) and the devaluation of the local currency has impacted local demand for air travel over the last couple of years. While transit traffic and visitor numbers have grown, from a low base, overall the market has essentially stopped growing.

Not surprisingly, the traffic at market leader Air Astana has been impacted by the overall slowdown in the Kazakhstan market. 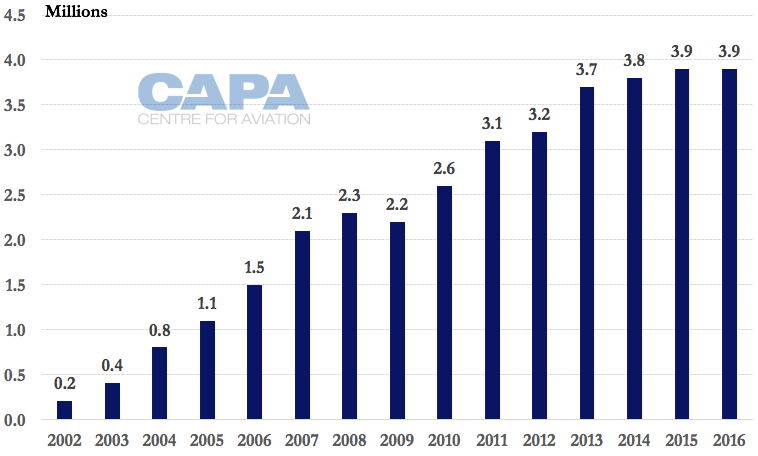 Air Astana’s revenues since 2013 have declined by approximately 30% due to devaluation of the local currency and an increase in lower yielding transit traffic – which was necessary to offset the decline in local demand. Air Astana has not yet reported any full year figures for 2016 but, as CAPA highlighted in an Aug-2016 report, annual revenues were projected to come in at approximately USD730 million.

As CAPA highlighted in a Sep-2016 analysis report, Air Astana has been working on a new 10-year business plan since mid 2016. The new business plan, which outlines fleet and network growth, has been completed but has not yet been made public. Air Astana currently serves 26 international and 13 domestic destinations with a fleet of 31 aircraft (including 20 narrowbodies, two widebodies and nine regional jets).

Rapid narrowbody fleet growth is likely as Air Astana focuses on Asia-Europe connections along with further enhancing regional connectivity within Central Asia and the CIS region. Air Astana has been looking at doubling its fleet over the next 10 years while significantly expanding its network in Asia (particularly China and India) and Europe. However, Air Astana may cancel its 787 order and drop plans to serve the highly competitive North American market.

Details of the new business plan could finally become available in the coming months as Air Astana drafts its IPO prospectus. Air Astana has recently been conducting initial pre-IPO road shows and is preparing for a listing in 2018. A dual listing in Kazakhstan and overseas – Hong Kong or (most likely) London – is planned.

The timing of the IPO, which been in the planning stages for several years, does not entirely seem ideal. Growth has slowed, profitability has tumbled and competition is intensifying – both locally with other Kazakhstan carriers and with foreign airlines.

A higher reliance on transit traffic, which is necessary for Air Astana to realise its growth aspirations, also typically comes with lower yields and subjects it to more overlap with much larger network airlines including Emirates, Qatar and Turkish.

There are currently seven airlines operating scheduled passengers services in Kazakhstan although only two currently operate international services – Air Astana and SCAT. Privately owned SCAT is older, having launched operations in 1997, but was quickly overtaken after the government launched Air Astana with BAE Systems in 2002.

Privately owned Bek Air is the third largest airline in the Kazakhstan domestic market, capturing a 19% share in 2016. Bek is a relatively newcomer, having launched operations in 2011. Bek has been pursuing relatively fast domestic expansion over the last year and is expected to continue adding domestic capacity as it expands its fleet.

Qazaq Air is the fourth largest airline and captured a 5% share of the domestic market in 2016, its first full year of operations. The other three airlines operating domestic services in Kazakhstan are very small and combined only carried 30,000 passengers in 2016.

The 2015 launch of Qazaq as a second government owned airline could be a concern to potential Air Astana investors as international services within Central Asia and the CIS region are being considered as part of a future expansion phase. Qazaq and Air Astana do not codeshare but Air Astana has assisted the start-up by providing some assistance and personnel.

Kazakhstan government investment firm Samruk-Kazyna owns Qazaq and the government’s 51% share in Air Astana. While the government is committed to selling part of its stake in Air Astana through the planned IPO (along with BAE), launching and expanding into the international market a separate airline sends the wrong message.

The government identified a need for a regional airline following Air Astana’s 2013 phase out of turboprops and Air Astana has since been reducing its reliance on the domestic market. However, there are sufficient private airlines in Kazakhstan to meet domestic demand.

There is also a subsidy scheme in place to ensure that services to smaller rural communities are maintained. Of the 42 domestic routes currently operated, 15 are subsidised, according to the Kazakhstan Civil Aviation Committee.

Four foreign airlines to launch services to Astana in summer 2017

Kazakhstan has liberal aviation policy which had enabled foreign airlines to launch services to expand. This policy, which has an overall positive economic benefit, also has enabled the launch of new start-ups in Kazakhstan.

Kazakhstan is currently served by 27 foreign airlines with Aeroflot by far the largest foreign competitor with more than 15,000 weekly seats, according to OAG data for the week commencing 8-May-2017. Kazakhstan authorities expects four more foreign airlines to enter the market in 2017 including Air China, Finnair, LOT and Wizz Air.

Air China is also planning to launch thrice weekly service from Beijing to Astana on 1-Jun-2017, which will result in competition for Air Astana on the Astana-Beijing route. China Southern is already in the Astana market but only operates from Urumqi in nearby western China.

China Southern is one of 13 foreign airlines now operating scheduled services to Astana and will be one of 17 foreign airlines in the Astana market once LOT, Wizz, Finnair and Air China enter. Almaty Airport, which is larger but has not been growing due to infrastructure constraints, is currently served by 25 foreign passenger airlines.

While the new routes are good for consumers and the economy, overcapacity is a concern given that the overall market is not growing. Air Astana is able to compete effectively as it has a low cost structure and solid financial footing. However, more competition from foreign airlines means Air Astana has to share the local market with a wider group of airlines and will need to rely even more on transit traffic.

Astana Airport emerges as a hub

Kazakhstan, located at the crossroads of Asia and Europe, is well positioned geographically to attract transit traffic. Air Astana is also well positioned to carry sixth freedom traffic from a cost perspective. Its cost per ASK is below USD5 cents, making it one of the lowest cost full service airlines.

The government also has committed to position Astana Airport as a transit hub. A new international terminal is opening ahead of EXPO 2017, which will be held in Astana from 10-Jun-2017 to 10-Sep-2017, expanding the airport’s capacity to 8.2 million annual passengers.

Air Astana has had a split hub strategy for several years, and currently has slightly more capacity at Almaty than Astana. However, maintaining dual hubs is challenging given its new focus on transit traffic. Most of the airline’s expansion is therefore now focused on Astana.

While Almaty is still the largest city and commercial centre in Kazakhstan, Astana has been growing faster and has a more modern airport capable of handling a large increase in transit traffic. Almaty’s privately owned airport is capacity constrained and has virtually no transit facilities. However, the Kazakhstan government continues to plan for a new airport outside Almaty which could eventually prompt Air Astana to reconsider growth in the Almaty market or risk losing market share to other Kazakhstan based airlnes.

Almaty handled 4.9 million passengers in 2016 compared to 3.4 million passengers for the capital Astana. Kazakhstan has 10 other airports with more than 100,000 annual passengers, most of which also have international services from Air Astana, SCAT and a small number of foreign airlines.

Kazakhstan aviation market is at a crossroads

Kazakhstan’s aviation market is at an important juncture. Growth has slowed significantly but should be able to reaccelerate over the next few years driven by opportunities in the transit segment and a potential recovery in the economy.

At Air Astana, an IPO is finally being pursued after several years of delays. Air Astana has steadily been profitable and been the strongest airline in Central Asia but will have to grapple with intensifying competition.

The Kazakhstan government has adopted the right approach, providing a liberal market and supporting the privatisation of its flag carrier. Air Astana should still be able to complete a successful IPO but some investors will likely be wary of the challenges now facing the airline and the overall Kazakhstan aviation market.