The majority of North and South American carriers witnessed a decline in stocks on Tuesday (16-Mar-2010), as oil prices (+2.4%) rebounded, to USD81.70. The fall was despite gains in the wider market, with the Dow (+0.4%) up as the US Federal Reserve maintained benchmark rates near zero, and again pledged to keep them low for an extended period. Stocks also gained on news EU ministers agreed to provide capital to Greece to boost it out of its sovereign debt, if required.

Continental Airlines (-0.3%) also slipped, despite analysts at Jesup & Lamont raising the carrier’s price target from USD22 to USD26, citing plans to charge for meals. The analysts stated the move would drive Continental’s ancillary revenues higher, and should save the carrier USD35 million p/a in food costs. Jesup & Lamont also maintained its ‘Buy’ rating for the carrier’s stock.

WestJet (-4.0%) took the day’s biggest fall, after CEO, Sean Dufry, announced his resignation the day prior. See related article: Durfy a loss to WestJet at a vital time; 'New World Carriers' moving to the next level

All network airlines reported declines in staff numbers, expect for Delta Air Lines (+2.5%), which reported a 3.3% year-on-year increase, as staff from Northwest Airlines were included for the first time. Southwest Airlines (+1.4%) was the only LCC to report a decrease in staff for the month, with FTE staff levels falling 2.1%. 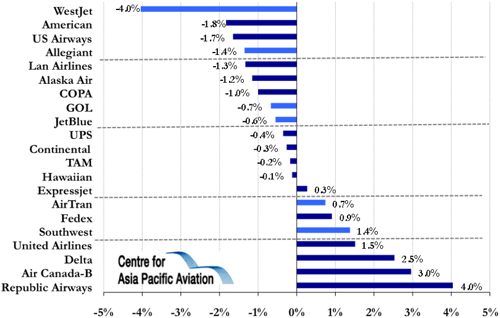