North and South American airline stocks declined with wider markets on Tuesday (10-Aug-2010), with the Dow (-0.5%) ending trading lower. Investors were concerned during trading over an unexpected widening of China’s trade surplus and looming guidance from the Federal Reserve.

JetBlue Airways (-1.1%) was down as CEO, David Barger, stated current trends in the US airline industry are "positive", adding: "The economy is stronger. We’re not seeing anything that looks like a double dip." Mr Barger added that the carrier is "really pleased" with its "very strong" summer 2010 performance, stating: "We’ve seen plenty of 90% load factors."

Passenger revenue per ASM (PRASM) rose 16% for the month.

Tarmac delays kept to a minimum in Jul-2010

Hawaiian Airlines (-3.4%) suffered one of the biggest falls for the day, as it reported the highest on-time performance rate of US carriers, according to the Bureau of Transportation Statistics (BTS). The top three airlines were:

The nation's largest airlines reported only three flights in Jun-2010 with tarmac delays of more than three hours compared with 268 flights in June 2009 and with no increase in the rate of canceled flights, according to the Air Travel Consumer Report released today by the US Department of Transportation (DOT).

This was the result of the DoT’s new rule prohibiting US airlines operating domestic flights, from allowing an aircraft to remain on the tarmac for more than three hours without deplaning passengers. 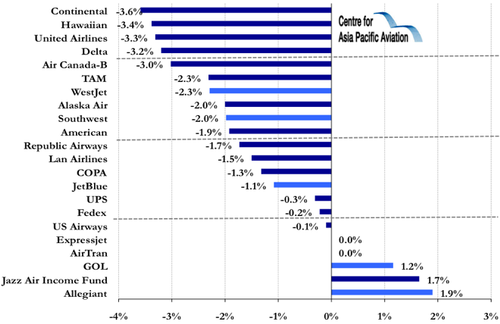