JetBlue only gainer as American carriers fall, led by US Airways and United Airlines

All North and South American carriers, except for JetBlue, ended Monday (31-Aug-09) down, following the wider market. The Dow (-0.5%) fell on the back of another sharp drop in the Chinese market, raising concerns of the strength of an economic recovery in the US and lower sentiment towards energy trading in the US.

JetBlue (+1%) was the only gainer on the day as a result of analyst Stifel Nicolaus initiating coverage of the LCC at “Buy”, with a price target of USD8. The LCC also confirmed during the day that it has signed a codeshare agreement with Lufthansa.

Despite recent gains, Expressjet (-8.4%) led the fall, followed by US Airways (-4.8%) and United Airlines (-4.5%). Republic Airways (-3.5%) was also down, despite a strong rise the day prior on the back of Frontier Airway’s announcement that it made its ninth consecutive monthly net profit.

Southwest (-3.9%) stocks meanwhile fell ahead of the carrier’s 01-Sep-09 deadline to settle a dispute with the FAA over the use of unapproved parts on more than 80 aircraft. 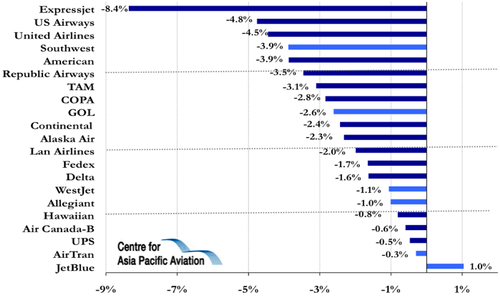