Jazeera Airway’s regional focus continues to pay dividends for the carrier, with passenger traffic up 7% in May-2013. The airline has seen “significant passenger pick-up” in May on a number of its most important regional routes, even in the face of heavy competition from both LCCs and regional widebody operators. Strong growth was reported on routes to Dubai, Beirut, Amman, Jeddah, Cairo, Sharm El Sheikh, Assiut and Sohag during the month.

Jazeera’s network covers 19 routes in 11 countries, concentrated on the Middle East with most destinations within two hours flight time of its Kuwait hub. Unlike LCC contemporaries in the Gulf region such as flydubai and Air Arabia, the company is concentrating on yield first and growth second. Jazeera aims to maximise profit on its existing sectors on a quarter to quarter basis, rather than trail breaking new markets and expanding its network coverage. This involves increasing frequencies on its highest-demand and most profitable routes, gradually building load factors and raising yield levels. 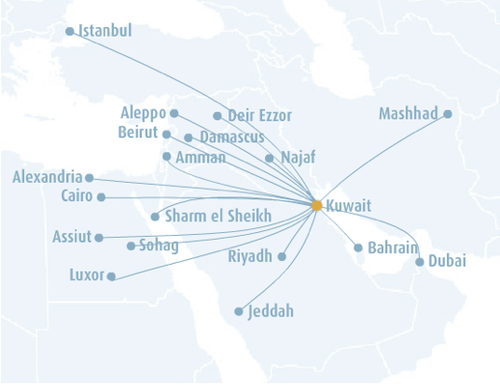 During May-2013, the airline’s passenger traffic on Kuwait-Dubai service picked up an impressive 19% over the same period in 2012, building on 6% growth in April. Dubai is far and away the most popular destination to/from Kuwait, but Jazeera Airways has managed to hold onto a 15% share of the market on this route, despite intense competition. 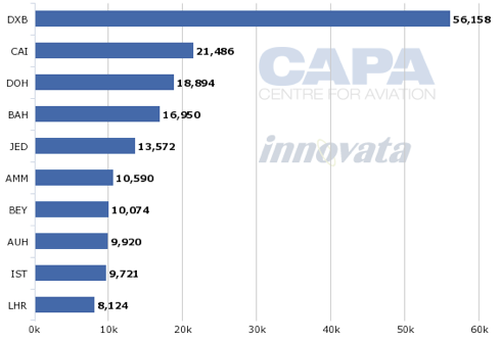 With four daily frequencies – one mid-morning, two in the evening and one later at night – Jazeera Airways has been able to appeal to business travellers on the Dubai route as well as feeding traffic into Dubai’s ever expanding route network. Jazeera’s business class service – featuring a 60kg baggage allowance, priority seating and boarding, complimentary lounge access, meals and IFE – is a competitive product in the LCC segment.

The Egypt market has performed well for Jazeera

Jazeera Airways has a strong market share on most of the Egyptian routes that it operates, with a better than 50% market share to Assuit, Sharm El Sheik and Luxor. The carrier now operates almost 9,000 seats per week between Kuwait and Egypt, accounting for between 35% and 45% of capacity on a week-to-week basis. This has held up well through the country's teething pains with democracy, although the most recent demonstrations and subsequent  intervention by the army will continue to add challenges.

Outside of the UAE and Egypt, Saudi Arabia is showing significant traffic growth, following the signature of a new air services agreement between the two countries in late 2012. The carrier’s services to Jeddah grew strongly, although expansion into Riyadh has been more muted.

Also showing strong growth was the carrier’s Istanbul service, its longest operational sector. Jazeera launched twice weekly seasonal scheduled services to Istanbul on 31-Mar-2013 for the summer schedule. Traffic on the route is better than 40% above 2012 levels.

Jazeera remains concerned about overcapacity in the Kuwait market, and in the Middle East short-haul market in general. With Kuwait Airways almost moribund and unable to compete significantly with the Gulf sixth freedom carriers in long-haul markets, some of the largest airlines in the Gulf are deploying significant capacity on short-haul routes to snatch a share of Kuwait’s long-haul market.

Going into 3Q2013, Jazeera Airways expects to see higher passenger demand for the quarter, after reporting a better than expected 1Q2013 and higher than typical demand in 2Q2013.

With Ramadan falling in early Jul-2013, the carrier believes it may see a double peak during the summer travel period, with one travel spike prior to the onset of the holy month and a second travel spike following the end of the religious festival. But, following that, 4Q2013 traffic demand is expected to be mild.

Slow and steady on fleet growth

Complementing its strong growth forecast, Jazeera Airways took delivery of another A320 in early Jun-2013. The new aircraft brings the Jazeera Group’s total fleet to 13 aircraft, of which six are on lease to foreign carriers via its fully-owned leasing arm Sahaab Aircraft Leasing - a strongly performing part of the Group. The A320s are placed with Virgin America, SriLankan Airlines and nasair, providing stable revenue and a sizable profit for the Jazeera Airways Group.

With the new aircraft, Jazeera Airways’ operational fleet will comprise eight A320s for the summer peak period. As demand eases into late 2013 and early 2014, at least one aircraft will go to back to the leasing unit. Jazeera Airways retains the newest aircraft for its own operations, keeping its fleet age down and maintenance costs low. The older A320s are shifted into Sahaab Leasing.

At the beginning of Jun-2013, Jazeera Airways secured a USD90 million 12-year term loan from National Bank of Kuwait and DVB Bank, settling its fleet funding requirements for the next two years. The loan will finance the purchase of three new A320s, including the most recent delivery. The two remaining A320s will be delivered in Oct-2013 and May-2014 respectively.

So far, the carrier has no plans to purchase or lease new aircraft, preferring to concentrate on driving its aircraft utilisation and improving its load factors with a standardised fleet. According to chairman, Marwan Boodia, the carrier intends to wait until the end of 2014 to start negotiations with manufacturers, with an eye towards getting new aircraft in 2017. The airline remains committed to the A320 family, and will take a wait and see approach to new aircraft such as the A320neo and 737 MAX, preferring to let other airlines introduce the new technology.

By Middle East standards, this is an exceptionally modest fleet plan. Many of Jazeera Airways’ peers are adding capacity at the rate of close to one aircraft per month. flydubai plans to add six more 737-800s by the end of 2013, including the first aircraft with a two-class configuration. Air Arabia plans to add six A320s, while nasair plans to take delivery of four A320s during 2H2013, including one recently leased from Sahaab.

Jazeera Airways intends to continue on its steady growth trajectory, concentrating on yield maximisation for its point-to-point operations and executing its strategic plan to ensure consistent profitability. It has worked well for it so far.