Skymark Airlines, Japan’s third largest carrier, expects its profitable run to continue in the current fiscal year through Mar-2012 with the carrier, like Japan Airlines, upwardly revising its operating profit forecast for the full year. The LCC has revised its profit forecast upward by 21% to JPY17 billion (USD221.2 million) after reporting a 55% year-on-year increase in operating profit in the six months ended 30-Sep-2011, amid a positive outlook for the current quarter.

2011 has been a busy year for Skymark Airlines, which earlier in the year placed a landmark order for six A380s, as part of its ambitious growth plans, moving it away from the small (and successful) domestic quasi-LCC model to a long-haul international carrier. The carrier’s expansion strategy is unique in that it will operate two very different models. Long-haul international services will utilise A380 equipment configured in a low-density seat configuration. Domestic and short-haul services will continue to be operated with economy-only B737 aircraft and no-frills service, with the carrier recently launching its 'Narita Shuttle' service as part of its domestic expansion.

The carrier handled 3.0 million passengers, a 49% year-on-year increase, with a 42% increase in passengers to 3.5 million expected in the second half. Growth has exceeded 35% in every month of 2011. During Sep-2011, the carrier reported the following traffic highlights by route: 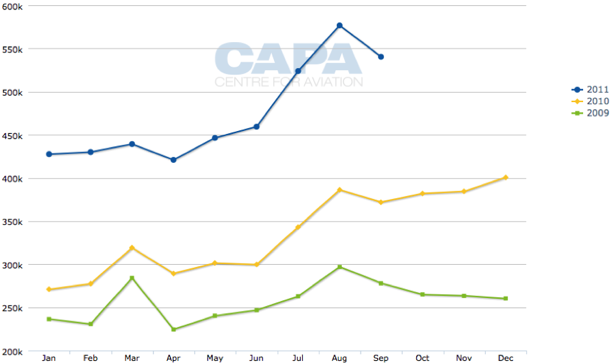 While still strong at 81%, the carrier’s load factors weakened by 3 ppts, with load factors expected to average 81% again in the second half of the year. Load factors were particularly strong on routes from Tokyo Haneda. 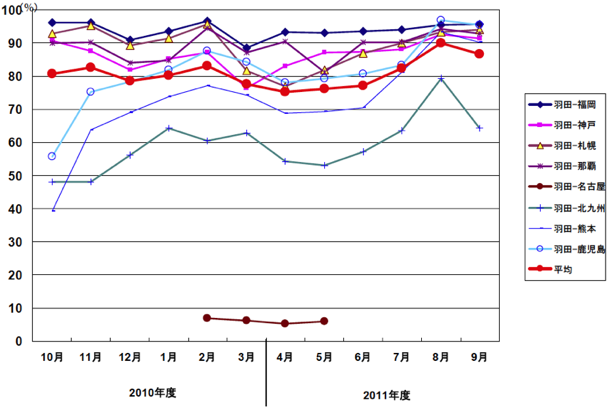 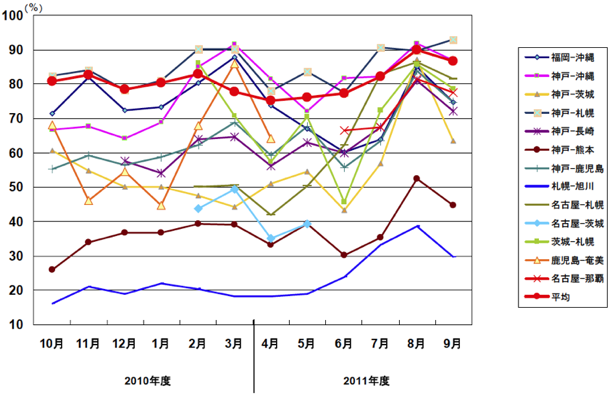 Skymark introduced five aircraft to its fleet in the six months to Sep-2011, increasing its capacity seats by 48.7%. The increases in capacity and traffic in 2011 follow five years of comparatively modest growth, which saw a reduction in traffic and capacity over 2008 and 2009. 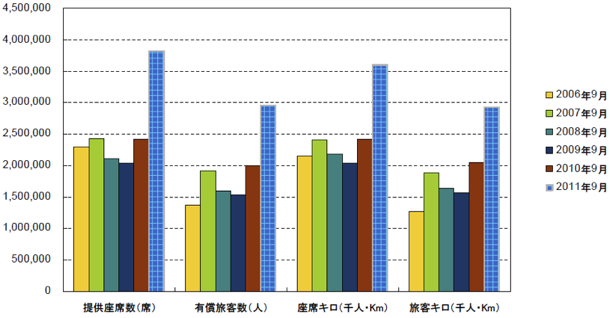 RASK and yield growth in six months to Sep-2011 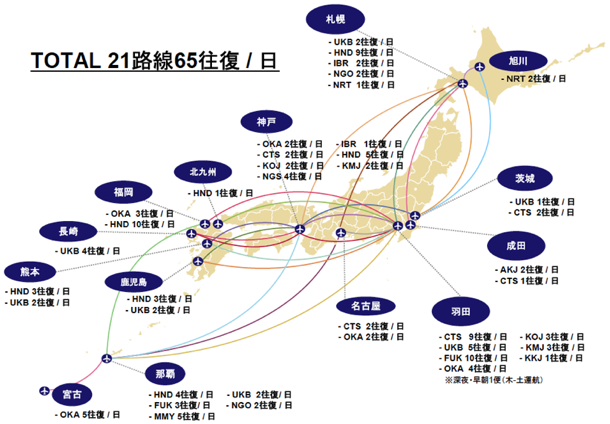 Skymark Airlines operates an all B737-800 fleet comprised of 21 aircraft configured with 177 seats and an average fleet age of 2.5 years. The fleet size is expected to increase to 29 aircraft by Mar-2013. 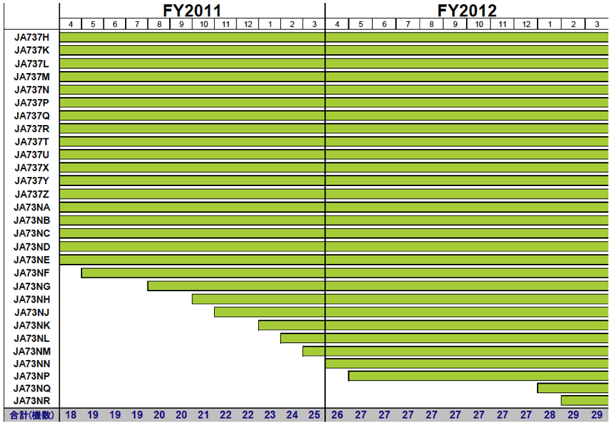 The carrier has a further three B737-800s on firm order, with the carrier diversifying to a two-aircraft type fleet from 2015, when it takes delivery of its first of six on order A380s. On 15-Sep-2011, the carrier signed a LoI with Rolls-Royce to provide Trent 900 engines to power six A380 aircraft, including TotalCare long-term engine service and support. Skymark is a new customer for Rolls-Royce, and the airline is the first in Japan to order the A380. 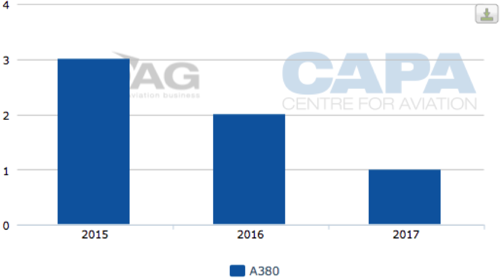 The A380 will be the first widebody aircraft to join the carrier’s fleet. Skymark’s A380s will be configured for business class and premium economy with about 400 to 450 seats. This would make the carrier one of the lowest density A380 operators.

The A380 is intended for long-haul international routes and will initially operate on Japan-Europe routes in 2014 with destinations including London and Frankfurt, followed by services to North America, initially to New York. Skymark expects to its fares to be half those charged by Japan Airlines and All Nippon Airways (ANA). If the airline succeeds in its international business, it will aim to expand services, with more aircraft, to cities such as Los Angeles, Sydney, Melbourne and Singapore. Future destinations will also include Honolulu, Vancouver, Melbourne, Bangkok, Singapore and Rome. The carrier expects the A380s to be profitable in the first year of operation.

The carrier’s expansion strategy is unique in that Skymark will operate two very different models. Long-haul international services will utilise A380 equipment configured in a low-density, business/premium seat configuration with full service. In contrast, domestic and short-haul services will be operated with economy-only B737 aircraft with no frills service, although Mr Nishikubo stated at the Paris Air Show that if the airline plans to acquire smaller aircraft in the future, the A320neo "would be a very good candidate".

As part of its domestic low-cost model, the carrier launched "Narita Shuttle" services on 30-Oct-2011. With this, the carrier becomes the first LCC to open a hub at Narita. “We want to try something that no one has ever done,” Mr Nishikubo said. The service was launched with services to Asahkiawa (two daily services) and Sapporo (once daily) on 30-Oct-2011, with service to Naha to follow on 08-Dec-2011. The plan is that Shuttle services will operate to up to six cities with twice daily frequency. The airline plans to expand to operate 25 daily services by Sep-2014 to nine domestic destinations, including Asahikawa, Fukuoka and Sapporo. Skymark selected Narita citing higher operating costs at downtown Haneda. Narita and Haneda have busy schedules and some of the most expensive landing fees in the world, let alone in Japan.

Having lower unit costs in its domestic operations is part of the Skymark’s objective to maintain a low-cost and low-fare operating structure. The carrier stated that its objective in entering the domestic market in Sep-1998 was to break the oligopoly in the domestic Japanese market.

“In Japan, since the aviation industry resumed all operations after the war, there have been a great number of mergers consolidating the airlines into two distinct structures (except affiliate companies), resulting in a lack of adequate competition and oligopoly in the domestic flight market. There has been a remarkable slashing of prices in the international flight market, which is locked in fierce competition, and benefactors have been the customers. On the other hand, fares in the domestic market have been generally set at a high level, with customers' dissatisfaction constantly increasing. Our company was founded to enter this domestic flight market, create a competitive environment, and contribute to enhancing customer satisfaction,” Mr Nishikubo is quoted as saying on the carrier’s website.

However, the carrier will face intense competition from ANA’s low-cost subsidiaries, Peach Aviation and Japan AirAsia, and Japan Airlines’ LCC subsidiary Jetstar Japan, all of which are set to enter the market in 2012. The ANA-AirAsia agreement is particularly painful for Skymark, as AirAsia was initially intending to tie-up with Skymark Airlines instead of ANA, a move which would have aided Skymark’s pretensions of becoming a force in the market.

Meanwhile, the carrier is looking at entering the long-haul international market, with ambitious international expansion which the carrier itself admits is ambitious and bold. Its plan to configure its A380 with just 394 seats including 280 premium economy class seats and 114 business class seats is also risky, with potential concerns centring on its ability to garner enough revenues to cover the higher unit cost, especially given the carrier’s plan to offer fares at lower levels than its competitors. "We believe price is the number one way to appeal to customers,” Mr Nishikubo has said commenting on its pricing policy, but added that it is targeting markets where there is potential to offer reduced fares than its competitors at a profitable level.  “We like markets with high fares the best," he said.