Japan has long been a standout in protecting its airline sector. It was only the surprisingly "big bang" of 2010 that provoked a new direction, as JAL was thrust into bankruptcy, an open skies agreement was signed with the US and the JDP government began pursuing a much more liberal bilateral policy, allowing new LCCs and establishing open skies agreements with regional neighbours. But now, under the new (but old LDP) Shinzo Abe-led government, things may change. The Gulf airlines may be the touchstone.

The country's long standing protectionism in bilateral air services had created the position that, of the world’s five-largest air markets – the US, China, Japan, UK and Germany – it was Japan that received the least capacity from the major Middle East network airlines.

When Emirates and Etihad finally secured approval to fly to Tokyo Narita in 2010, they inaugurated services immediately.

Further liberalisation has granted the carriers increased access, including into Tokyo Haneda, which Emirates will serve daily from Jun-2013 with 777-200LRs. Qatar Airways will de-couple its services and have a dedicated flight to each Osaka Kansai and Tokyo Narita. Etihad, the smallest of the three, is waiting on aircraft, taking only six widebody passenger aircraft in 2013.

Mr Abe’s Liberal Democratic Party, although conservative and with longstanding links into big business, has the priority of reviving Japan’s economy, including through large government spending. Liberalisation is free and its benefits extensive, but having politicians align to aviation’s (and consumers') best interests is seldom easy. Signs of future directions may soon be apparent.

As is typical of other markets, Emirates has been in Japan the longest of the three Gulf carriers and early last decade served Osaka Kansai and Nagoya, the latter dropped in 2009. Access to Tokyo – later up-gauged to A380s – in 2010 sharply increased capacity and also saw Etihad enter the market. Etihad also serves Nagoya via Beijing. Qatar serves Tokyo Narita as a tag-end flight from its Osaka Kansai service.

At the time of Emirates’ entry into Tokyo, SVP Richard Vaughan told UAE paper The National that Emirates had been negotiating for slots as far back as 1998. A bilateral air services agreement saw the UAE receive 10 weekly frequencies, which Emirates and Etihad had to split, allowing a less-than-daily operation, a less than ideal scenario.

Subsequent expansion of the bilateral saw daily operations permitted, while a 2012 expansion gave double daily Tokyo Narita access effectively to each carrier, as traffic rights were separated out between Abu Dhabi and Dubai. The 2012 revision also saw each carrier receive permission for the first time to serve with one daily flight Tokyo Haneda, the convenient downtown airport preferred by passengers but where slots are scarce, which is why there was nearly a year-long delay between approval and availability.

In addition, and as is typical for long-haul flights at Haneda, only late night and early morning slots are available.

Scheduled seat capacity into Japan from Emirates, Etihad and Qatar: 2003-2013 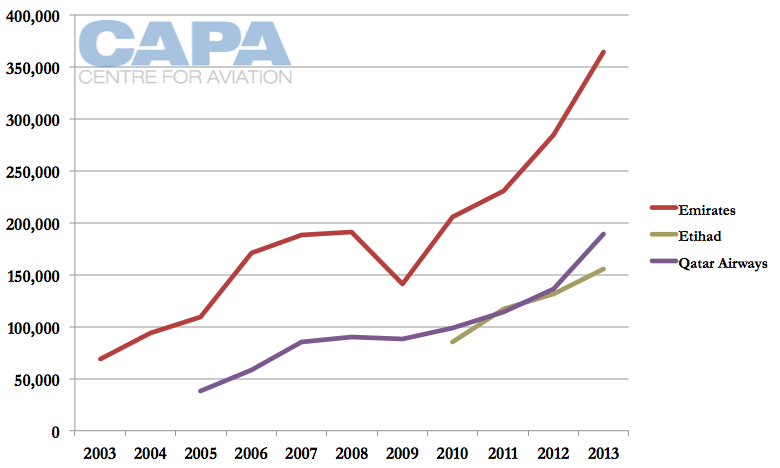 Emirates in Jan-2013 announced it would take up the bilateral expansion with a daily Dubai-Tokyo Haneda service from 03-Jun-2013 on the 777-200LR. Etihad from 31-Mar-2013 is increasing Abu Dhabi-Tokyo Narita from five weekly to daily while Qatar Airways will decouple its Doha-Osaka Kansai-Tokyo Narita service and provide a dedicated flight to each city.

While the coupling strategy can work in some instances, Tokyo is the key city for Qatar, and having a stop in both directions was not convenient. Qatar benefitted from a revised bilateral agreement as well that saw Doha-Tokyo Narita services increase to double daily while allowing a single daily Doha-Tokyo Haneda service.

What has been most notable about the expanded bilateral agreements is that Japan is in effect allowing Gulf carriers to serve its national interests. It is difficult to imagine a time where Japanese airlines would fully take up their share of the Japan-Middle East bilaterals (indeed, they currently sit empty). Historically, the bilateral response would have been to reject new entry where Japanese airlines had no interest in serving reciprocally - a short-sighted measure to protect local carriers at the expense of the wider economy. Where the Gulf airlines are concerned, both Canada and Germany have adopted this historical approach, to protect Air Canada and Lufthansa.

While bilateral air services agreements are classically (and archaically) based on reciprocity of airline interests – so that inertia is the dominant force – with Japan and the UAE and Qatar, Japan is doing all of the "giving" and none of the taking.

And that is the beauty of these carriers Japan is welcoming: they can turn weaknesses or absences into filled seats, with all the ensuing economic benefits to flow – if countries are willing to unfurl the welcome mat. JAL's post-bankruptcy reduction in marginal long-haul services has helped open this door no doubt. But the dividends to Japanese tourism and travel are near-boundless, once the vast array of global one-stops makes almost any large city in the world available daily one stop. The impact on tourism and travel is near-miraculous. Mere double-digit growth becomes commonplace.

Haneda is Tokyo’s downtown airport, far more conveniently – and cheaply – accessible than more distant Narita. While long-haul flights commenced from Haneda at the turn of the decade with considerable fanfare, in practice they have proved difficult to take up owing to the time restriction, which generally means arriving and departing at Haneda between 10pm and 7am.

That all but eliminates onward connections, while the non-ideal times reduce Haneda’s proximity advantage. All Nippon Airways, which is making international services from Haneda a cornerstone of its strategy, has found that of cities served from both Haneda and Tokyo, Haneda-originating flights have a greater share of business passengers and are higher-yielding. But this is only for similar departure times. Comparing a late-night Haneda flight to a daytime Narita one provides similar yields.

Intercontinental carriers have not always fared well. British Airways over Jan-2013 reduced its London Heathrow-Tokyo Haneda service to five times weekly, which it also did in Jun-2012. American Airlines launched New York JFK-Tokyo Haneda services, only to revert the service back to Narita and then again back to Haneda.

Intercontinental carriers serving both Haneda and Narita include American Airlines, British Airways and Delta. BA and Delta serve just one point from Haneda (Heathrow and Los Angeles, respectively), which they also serve from Narita. American no longer serves New York from Narita. Delta has received permission to operate Haneda-Seattle. It currently operates Narita-Seattle and intends to keep the Narita service.

Emirates’ Haneda service will be operated by 777-200LRs, which seat the same number of first (eight) and business class (42) passengers as its 777-300ERs, but with fewer economy seats. The Haneda service will arrive at 0001 and depart at 0130; its Narita service arrives at 1720 and typically departs at 2200, giving some differentiation on the eastbound sector but less on the westbound, and is certainly not wide enough apart yet to feed into its other scheduling waves.

Emirates' daytime international services are due to be expanded in 2013 or 2014.

The domestic Japanese market is the bread and butter for ANA and JAL. Beyond Asia, their international footprints are light, and mainly in traditional markets in the US and Europe. But the world has grown immensely beyond these staples and other markets are finding Japan, accessing the country on other carriers.

ANA and JAL are showing little interest in accessing these markets, as they fight to adapt to a new more competitive world. They are restricted by hubs but also by their prohibitive cost bases – double that of Emirates, even if their substantial short-haul operation inflates the average CASK. (Etihad and Qatar do not disclose their CASK.)

Consequently, much of Japan’s air traffic growth and economy must largely hinge on foreign carriers. And few have proven more efficient or adept at delivering high growth rates than Emirates, Etihad and Qatar.

The Middle East network carriers are helping to link Japan to markets its airlines do not serve. Japan recorded a 26.8% year-on-year increase in visitor arrivals in 2010, the last normal year before the Mar-2011 earthquake and tsunami saw passenger numbers significantly drop. The growth was largely concentrated in Asia, which increased 35.6% and is a market where the Middle East network carriers have little influence.

Yet other regions show the potential for the likes of Emirates, Etihad and Qatar to help grow traffic. African passport holders arriving in Japan increased 9.9% year-on-year in 2010 despite no African or Japanese carriers serving Africa; the market is dependent on transfer traffic and even Asian airlines serving Africa are few.

European passport holder inbound travel increased 6.6%, and while very solid growth was recorded in countries that are directly linked to Japan – 6.9% in France, 12.3% in Germany and 12.6% in Switzerland – there was also large growth to/from countries not linked to Japan: 21.9% in Portugal, 15.0% in Belgium, 10.6% in Sweden. Middle East network carrier penetration in those countries is not deep, but they need only a few seats from each corner of their spheres to fill a flight. Countries where the Gulf carriers are more prominent also saw growth.

Spain ranks in the top 20 destinations for Japanese overseas travellers despite there being no direct flights between the two countries while another high ranker, Italy, has seen JAL suspend its services as part of its restructure, leaving only Alitalia to serve the market. Alitalia's current seat offering can only accommodate 80% of Japanese visitors to Italy in 2009, the last full year before JAL ended services, and this of course makes no provision for foreign visitors to Japan.

Brazilian passport holders visiting Japan increased 26.6% year-on-year in 2010 despite JAL ending its sole service, to Sao Paulo (with its massive Japanese heritage) via New York, in Sep-2010. Oct-2010 saw year-on-year growth of 16.0% while Nov-2010 declined 5.2% and Dec-2010 shot up 47.7%. While JAL signed a codeshare with American Airlines covering New York-Sao Paulo, no doubt traffic found other avenues – including on the Middle East carriers, who have since increased their South American coverage.

It is not just the Middle East carriers that saw revised bilateral air service agreements with more friendly access regimes.

Many other nations did too, and often gained open skies arrangements (the UAE and Qatar are not yet on that standing). Japan has been a leader in North Asia for liberalisation (this has helped the new LCC movement), part of a wider progressive strategy implemented by the Democratic Party of Japan when it gained control in 2009.

The JDP's loss of control in 2012 and the return of Mr Abe, a conservative who during his election advocated a harsh stance on China amidst wide anti-Japan backlashes in China. Since his new administration Mr Abe has however been at pains to build bridges with China and has adopted some decidedly taken non-conservative actions, for example overseeing a USD116 urgent stimulus package and doubling Japan's inflation target to 2%.

Although there have been no immediate signs that the Abe government will unwind its predecessor's progressive stance on aviation, the tourism and travel sector will need to reinforce the reminders of the genuine contributions to the economy that foreign airline services can bring under more liberal regimes. Protecting national airlines which are unable to deliver global service neither does them a great service, nor fulfills national economic goals.

Japan is in need of growth, and aviation – and the Middle East carriers in particular – deliver results.