Japan’s airlines are once again ramping up their domestic services after they endured a major setback in the first part of 2021 due to a surge in COVID-19 cases. Now demand is being stimulated by an easing of restrictions by the government, just in time for two holiday periods that are typically peak travel windows in Japan.

Japan Airlines (JAL) and All Nippon Airways (ANA) will be hoping that they can quickly regain the demand recovery momentum they were experiencing late in 2020, before the latest COVID-19 wave hit.

If they can, they should be able to move towards pre-pandemic levels of domestic capacity, as other countries such as Vietnam, China and New Zealand have done.

Japan's state of emergency has now been rescinded in all areas

Japan’s domestic capacity was rebuilding well through Dec-2020. Domestic flights did not completely shut down in Japan as they did in some other countries, although there was certainly a sharp drop during the early days of the pandemic.

After that, domestic capacity was generally on an upward trajectory, despite a temporary reversal in Aug-2020.

This changed when concerns grew about a third wave of cases. The government announced a state of emergency for the Tokyo region on 7-Jan-2021, which was originally due to be in place for one month.

It was subsequently extended to other prefectures, and the duration was pushed out by another month. As the surge abated, the state of emergency was lifted for most prefectures by 7-Mar-2021, although it remained in place for the Tokyo metropolitan area until 21-Mar-2021.

While there are still some restrictions and advisories in place regarding large gatherings and opening hours for restaurants and bars, the lifting of the state of emergency will be a boost for domestic travel.

This has occurred just before the spring break school holiday period in late Mar-2021 and early Apr-2021. Another important travel period is known as Golden Week, in late Apr-2021 and early May-2021.

Looking further ahead, the rescheduled Tokyo Olympic Games are due to be held in Jul-2021. However, organizers have announced that international spectators will be barred, and at this point any restrictions to be placed on domestic spectators are unknown.

JAL is adding back significant capacity – and it could keep climbing

The increases are driven by higher demand, which is partly due to the lifting of the state of emergency, and also the spring break and Golden Week holidays.

What happens after Golden Week will likely depend on COVID-19 trends – if cases continue to stay relatively low, then JAL’s operation rate could go even higher as it enters the summer travel season. But if cases rise again after the holiday periods, then another decline in demand could occur.

ANA is boosting services too, although load factors have been low for most airlines

ANA is also ramping up flights for the peak season.

Of course, capacity numbers alone do not tell the story, as airlines are generally struggling to fill the seats they are flying. For example, ANA reported that its domestic passenger load factor had dropped to 27.5% in Jan-2021 – down from 61% in Oct-2020 and Nov-2020.

Domestic recovery has been extremely bumpy

The capacity fluctuations in the Japanese market over the past year are reflected in the accompanying chart derived from CAPA and OAG data.

After the initial drop in Mar-2020 and Apr-2020, there was a solid improvement through Aug-2020. At that point a second wave of coronavirus infections caused much of the gains to be lost, before another increase towards the end of the year. But the arrival of the third wave early in 2021 hit even harder, causing capacity to fall to its lowest levels in Mar-2021.

Now it is building back up again, and should rise toward the 2020 peak levels if no more COVID-19 waves occur. 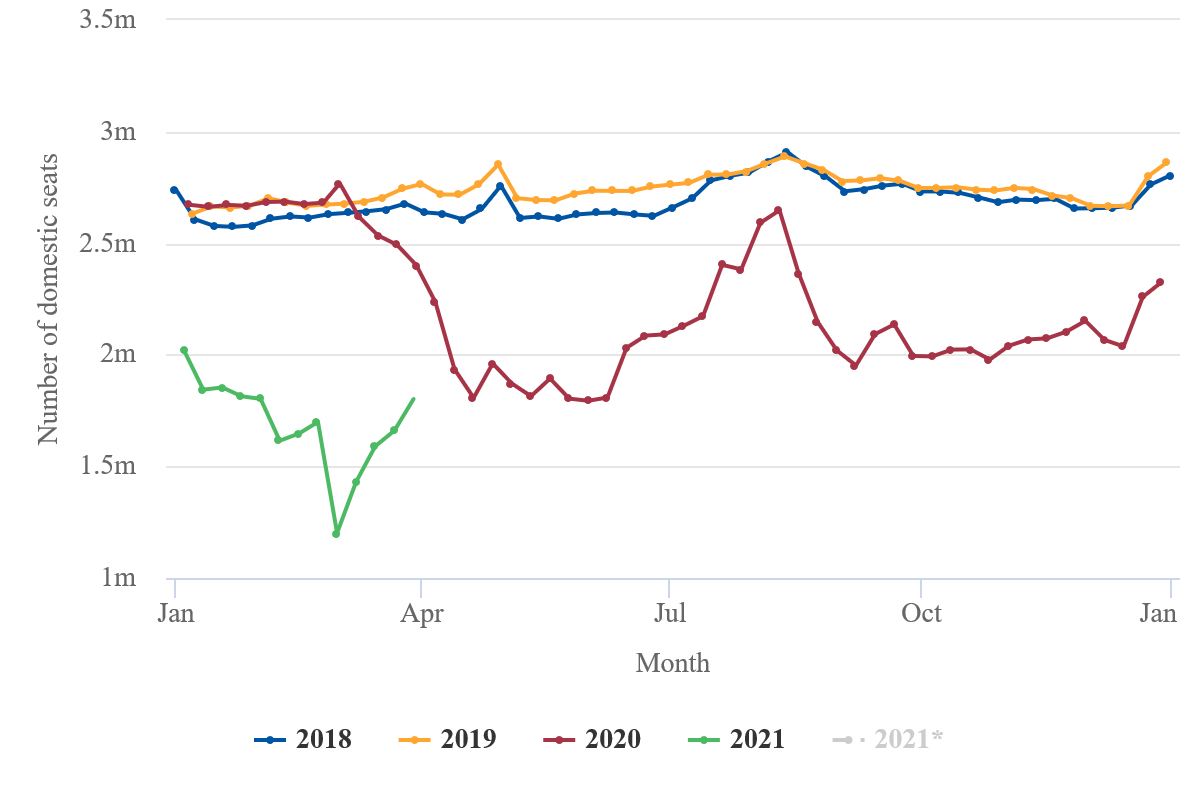 CAPA’s customised projection model for the Japanese domestic market (below) gives an indication of how capacity could develop over the rest of this year. It shows capacity continuing to climb steadily, peaking around Jul-2021.

A further increase towards 2019 levels could occur by the end of 2021.

Customised projection model for the Japanese market, to Nov-2021 (CAPA)

Despite all the movement in capacity trends in the Japanese domestic market, Japan has actually shown less volatility than most other countries during the pandemic. This is highlighted by the fact that the two busiest domestic routes – from Tokyo Haneda Airport to Sapporo and Fukuoka – have remained in the top tier of global domestic routes.

In Dec-2019, before the pandemic hit, these routes were ranked second and fourth of all domestic routes globally in terms of weekly seats, according to CAPA and OAG.

One or both of these routes remained in the top five all the way through 2020 and the first two months of 2021. In the week of 1-Mar-2021 they dropped to ninth and 13th place, although they have subsequently risen back to sixth and seventh place.

It has become an unavoidable reality in markets around the world that airlines are at the mercy of the pandemic regarding their capacity and network plans.

In many countries a promising domestic restart has been wiped out by a resurgence of cases and new government restrictions. Airlines must carefully juggle staffing and active fleet levels to ensure they have the flexibility to respond when restrictions are lifted. They also need as much clarity and consistency as possible from central and local governments regarding travel rule changes. From the airlines’ perspective, something they can do is implement touchless travel and cabin hygiene initiatives to boost confidence in travel.

In Japan, the upcoming peak periods should provide much-needed stimulation for domestic demand. Vaccination programs have also begun, which gives hope that the need for travel restrictions – and the risk of further outbreaks – will diminish.

The importance of domestic operations for the Japanese major airlines has risen exponentially over the past year, as international networks will remain at skeleton levels for some time.

ANA, for example, anticipates that domestic operations will remain its core revenue driver through the current fiscal year, which extends through 31-Mar-2022. This is in marked contrast to the pre-COVID focus on an expected increase in international visitors.