Shares of Japan Airlines fell as much as 11% yesterday to revisit a record low, of JPY85 reached in late Nov-2009, on investor concerns that the carrier would be restructured in bankruptcy court.

The shares closed down 8.3% on a day that saw 133 million shares changing hands (compared with a daily average over the past years of 17.1 million shares). JAL’s share price has lost nearly 60% of its value this year.

Also in North Asia, shares in Hainan Airlines gained 3.7% yesterday, after the carrier received conditional approval from regulators for a share placement of 595 million A listed shares on the Shanghai Stock Exchange.

The carrier, which will raise approximately USD439 million from the exercise, will issue the shares to state-owned enterprise, Hainan Provincial Development Holding, and the carrier's parent, HNA Group. The airline plans to use the funds to repay bank loans and supplement existing capital.

The “worst is over” for India’s aviation sector

Shares in Kingfisher Airlines and Jet Airways were up yesterday, by 3.5% and 0.6% (while SpiceJet was down slightly), as India’s Civil Aviation Minister, Praful Patel, stated the “worst is over” for the aviation sector, which is now “turning for the better”.

In the South Pacific, shares in Australian carriers, Virgin Blue and Qantas, were stronger yesterday (up 1.8% and 1.4%), as the Australian share market reached a nine-week high amid light trading, with the All Ordinaries index closing up 1.1%. 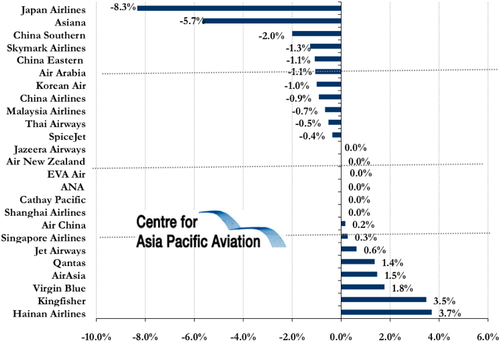