IndiGo stands out as the only profitable carrier in India

IndiGo is an anomaly in the Indian market – it is the only profitable domestic airline this financial year (ending 31-Mar-2012). The carrier is however, like its peers, feeling the pressure in a tough operating environment. President Aditya Ghosh this month noted the carrier would see a decline in FY2012 profits, with the results substantially impacted by high fuel costs.

"Margins were under huge pressure because average price of fuel is now higher than what it was in 2009. There has been a growth in revenue and we will turn out to be profitable at end of the year. It will be much smaller profit than we have done in the previous year,'' he said in an interview with Business Standard. The carrier reported an 18% increase in profit to INR6.5 billion (USD130 million) in FY2011 but expects the FY2012 result to be a "fraction" of this figure. "For us profitability means that we are able to get spare parts on time, pay salaries on time, maintain integrity of schedules and plan for growth," he stated.

IndiGo co-founder Rahul Bhatia confirmed the LCC "will end the year making money". He also dismissed comments made by Kingfisher Airlines chairman Vijay Mallya that the only profitable airlines in the Indian market are the ones conducting sale-and-lease back transactions. "Saying that all of our money comes from sale and leasebacks is silly," Mr Bhatia said, adding: "If sale and leaseback is the only formula to profitability, I don't think we have the IP rights on this and everybody can do it and I think everybody does it." Dr Mallya indirectly questioned IndiGo's profits, stating, “So far, there has been a downhill for civil aviation except for one airline that defies the odds and claims to be profitable".

As confirmed by India's Minister of Civil Aviation, Ajit Singh on 22-Mar-2012, all scheduled Indian airlines except IndiGo are incurring losses, based on returns filed by airlines with the Directorate General of Civil Aviation (DGCA). Mr Singh noted the industry has reported INR260 billion (USD5.1 billion) of operational losses in the 2007-2010 period, with an INR100 billion (USD2.0 billion) loss anticipated in 2011/12. "The spiraling cost of Aviation Turbine Fuel (ATF), global economic slow down and low yields due to intense competition and the consequent widening gap between revenue and expenses have contributed greatly to losses," he said.

Despite only entering the market less than six years ago in Aug-2006, IndiGo has rapidly soared up the ranks to become the second largest domestic carrier, overtaking Air India and Kingfisher Airlines on the way. In doing so, IndiGo has overtaken more well-established carriers that have expanded not only organically but through acquisitions and with a mixed-product that offers both full service and low cost products. And the growth for IndiGo is expected to continue, with the airline likely to remain the fastest growing airline in India in 2012, as it continues to add capacity on both domestic and international routes, with the latter expected to generate a growing proportion of total revenue.

IndiGo held a 21% domestic market share at the end of 2011, behind Jet Airways/JetLite, and up 4 ppts on a year-on-year basis. For the second consecutive year, the carrier reported domestic passenger growth of almost 40% to 11.8 million, with total passenger numbers exceeding the 12 million-passenger mark following the launch of international operations in Sep-2011. 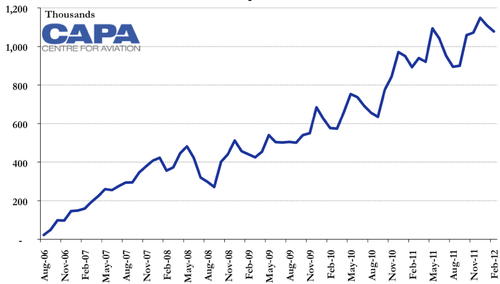 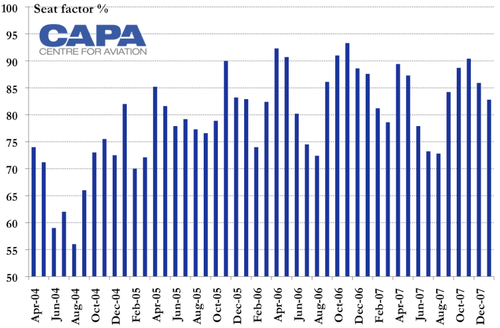 In the most recent month of Feb-2012, the LCC held a 21.3% market share compared to a combined 29.8% at Jet Airways/Jet Lite. IndiGo will likely take the top spot from Jet Airways in the coming months, with growth of around 12% p/a expected over the next few years. 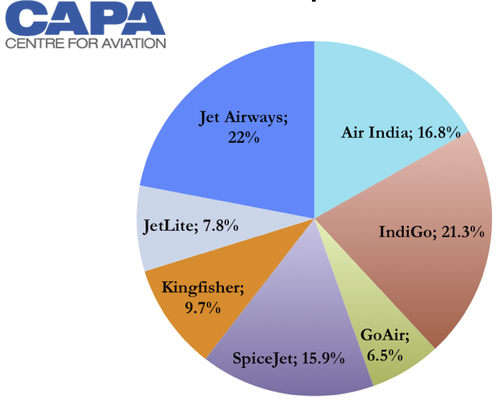 IndiGo to maintain investment and capacity addition plans for 2012

Meanwhile, the carrier is progressing with investment and capacity additions planned for 2012 despite current challenges in the market, with Mr Ghosh commenting in an interview with CNBC-TV18 that the carrier will be "adding a few destinations" in 2012. "We'll open up a few more destinations and we would be adding more frequencies in the destinations that we are already flying to," he said.

He separately said: "I am firmly of the view that we can not have a situation where capacity goes down and there is less number of planes flying when the market is growing at 15% as that would lead to a rise in fares. If fares start rising there will be an impact on the number of people flying and the whole growth story will start crashing down”.

IndiGo plans to increase frequency on domestic and international routes in the summer 2012 schedule, including the addition of 12 new services, as it adds nine aircraft to its fleet by the year end. “This year, we are concentrating on increasing our frequencies in the international and domestic routes in the summer schedule,” Mr Ghosh said. A key focus is on South India, especially in fast growing cities such as Visakhapatnam. 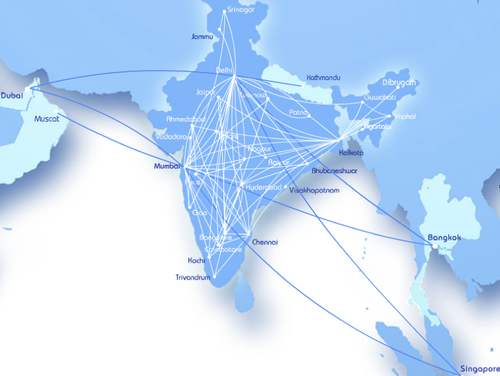 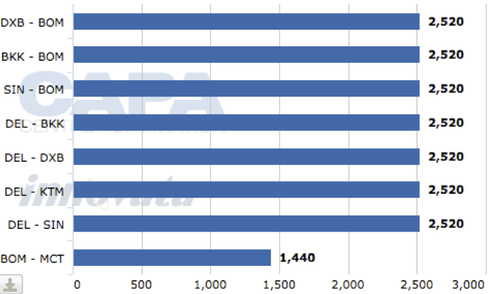 Domestically, the carrier’s largest route is between Delhi and Mumbai, which the carrier operates nine times daily with 180-seat A320 equipment. The next largest sector is Bengaluru-Delhi, followed by Delhi-Kolkata and Delhi-Lucknow sectors. 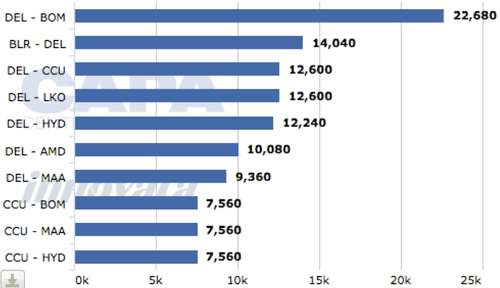 Meanwhile, Mr Ghosh stated the carrier sees no impact on its fleet expansion plans from safety concerns raised by the Directorate General of Civil Aviation (DGCA) earlier in the year. The regulator plans to review the rapid fleet expansion plans of IndiGo, after a financial surveillance audit found a shortage of trained staff and alleged operational discrepancies. "We have shared the (aircraft) delivery schedule (with DGCA and other concerned authorities) in 2005 for 100 aircraft and later for 150 more. This business requires more planes, more growth. If we can run it profitably, the others can too. We are not the only ones expanding capacity," Mr Ghosh said. 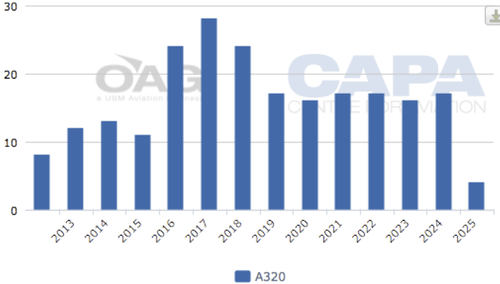 As its peers struggle, IndiGo has emerged with one of the strongest business models in the market, with a strict adherence to the low-cost model and its business plan as its network and fleet swells. The airline has however experienced some challenges with respect to people and service standards as a result of rapid growth, but management is paying attention to this to ensure the strong reputation that the airline has built up is maintained.

Underlying operating profitability is expected to remain under pressure, due to the weak rupee, yield pressure, high taxes, rising airport fees and high fuel costs. Mr Ghosh acknowledged the tough market conditions, stating: "If the fares are down and fuel prices are up, obviously it will create pressure on margins. But as long as we can keep our heads above the water, which basically means we have money for spare parts, for hiring people, for recruitment, that's what profitability means for us".

Regardless, the carrier is in a position envied by its peers. According to Mr Ghosh, the carrier's "only big objective is to prove that low-cost is not low-quality", with the carrier firmly focused on the often forgotten basics: on-time performance, clean aircraft and good onboard service at a time when many of its peers are struggling to remain in business.