Shares in Indian airlines were up strongly yesterday, as India’s benchmark stock index rose to a 30-month high as slowing food inflation fueled speculation the monsoon will boost crop output and buoy economic growth. The carriers' share price gains were boosted by reiterations by Civil Aviation Minister, Praful Patel, that the Government is examining a plan to allow foreign carriers to invest in local companies.

The carriers’ share price was also boosted by reports released on 18-Aug-2010 by the Indian Ministry of Civil Aviation that overall domestic passenger numbers in India increased 13.5% to 4.1 million.

AirAsia shares rose to their highest level in more than two-and-a-half years in intra-day trading (to MYR1.75) yesterday on buying interest buoyed by a strong set of second quarter results released on Wednesday.

The carrier’s share price has appreciated approximately 25% so far in 2010, outperforming the stock market’s benchmark FTSE Bursa Malaysia Kuala Lumpur Composite Index, which gained 9.4% in the same period. The carrier closed the day up 3.0% at MYR1.73 in a day when its stock was the most actively-traded counter on Bursa Malaysia with a volume of 20 million shares.

The strong set of results in the second quarter came largely within analysts’ expectations, with the results prompting some brokerages to raise their share price and revenue targets for AirAsia. See related report: AirAsia reports 'record quarter' in 2Q2010; 43% surge in profits; ancillary revenue and pax up.

AirAsia CEO, Tony Fernandes, stated the company was still studying whether to start paying dividends for the first time since its listing in 2004 after recording its sixth consecutive quarterly profit, according to a Bloomberg report. Mr Fernandes reportedly said: "That’s a big step forward for us."

Shares in Air New Zealand increased 0.9% yesterday, in a week that has seen an improvement in the carrier’s share price as rival Pacific Blue revealed it was pulling out of the domestic market. The carrier’s shares have risen from NZD1.14 at the start of the week to close at NZD1.18 yesterday.

Also providing a boost for the carrier is news, upon the release of the carrier’s Jul-2010 traffic highlights on 19-Aug-2010, that group-wide yields in the month increased 5.0% year-on-year. However, short-haul yields are down 0.2% on a year-on-year basis, as the airline introduced lower fares which stimulated demand, although the respective long-haul yields were up by 11.6%. Removing the impact of foreign exchange, group-wide yields were up 9.6%. Meanwhile, passenger numbers also increased by 7.2% to 1.2 million, with load factors improving 4 ppts to 84.1%.

Shares in Tiger Airways fell 3.0% in Singapore trading after two strategic investors in the carrier (namely Indigo Singapore Partners and Ryanasia), and the carrier’s CEO, Tony Davis, sold 65.8 million shares in the carrier at a discounted price of SGD1.90 to several institutional investors.

Shares in the carrier declined as much as 3.5% in the day, with analysts and brokers stating the sale is a sign the carrier’s share price is overvalued.

Macquarie Research commented that the sellers are “strategic investors”, further adding to concerns of an over-valuation in the stock, with Macquarie downgrading the stock from "neutral" to "underperform".

Shares in the LCC were also hurt by reports in The Straits Times that the carrier had lost more than 20 pilots since Jun-2010, forcing it to cancel services to Kuala Lumpur, Bangkok and Chennai over the past four days.

In other key Asia Pacific developments, China Airlines’ shares slipped 4.0% yesterday, despite the carrier reporting a 68.0% increase in sales revenue to USD414.6 million in Jul-2010. On the other end of the spectrum, shares in Japanese LCC, Skymark Airlines, soared 11.0%. 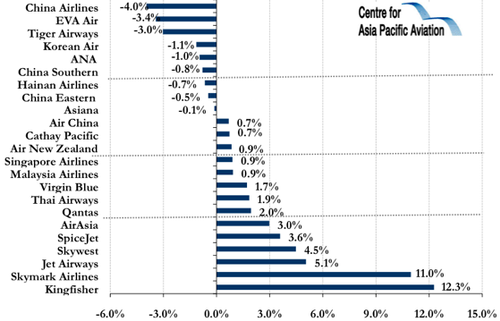 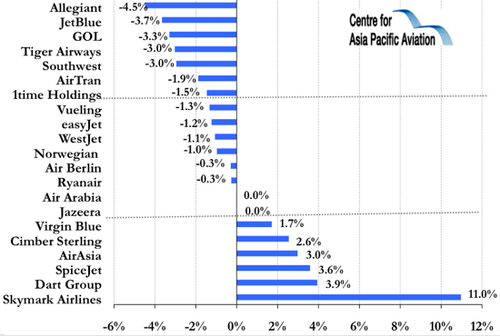