The Government has been mounting pressure on airlines to reduce fares and publicly make available fares on a sector-by-sector basis after fares skyrocketed after Diwali, especially for last-minute or spot tickets.

Centrum Broking said India’s aviation stocks have been affected by recent negative reports for the aviation sector, stating: “It is hard to comment on a single stock but basically the drop is because of the glut of news that has come out recently, which is not really healthy for the sector."

PAL Holdings Inc, owner of Philippine Airlines Inc, declined 4.8% to PHP4 yesterday, for the lowest close since 09-Nov-2010. The decline came as the carrier’s crew labour union stated its members are voting “overwhelmingly” on a possible strike action to protest what it claims are illegal one-on-one talks with personnel whose jobs the carrier plans to outsource. The notice filed by the union with the National Conciliation and Mediation Board “is without basis”, Philippine Airlines said in a statement yesterday.

Meanwhile, Philippine Board of Investments stated AirAsia plans to form a Philippine unit by 1Q2011. The Philippine venture will be formed with Antonio Cojuangco, a former Chairman of Philippine Long Distance Telephone Co and President Benigno Aquino's cousin, and will commence domestic and international services in 2011. The Malaysian stock exchange was closed yesterday. 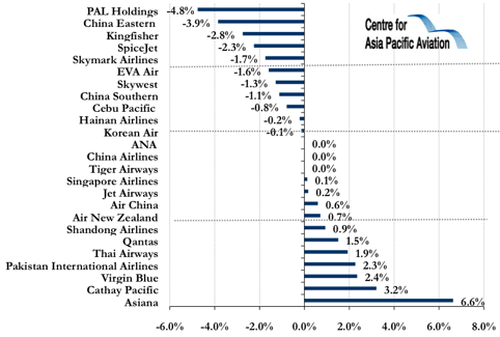 Source: Centre for Asia Pacific Aviation, Reuters & Financial Times
*It was a public holiday in Malaysia on 07-Dec-2010