India was the fastest growing domestic market in the world in Sep-2011 with 18.4% year-on-year growth. Traffic growth in the India market exceeded the growth rate seen in China (9.7%) and Brazil (7.5%) in Sep-2011, and was considerably more robust than the global growth rate of 3.8%. India's domestic aviation market expansion has been the strongest in the world, tripling in the past five years, according to IATA, to become the ninth largest aviation market in the world.

Given the strong market fundamentals, the robust rate of growth is expected to continue. IATA forecasts that the Indian civil aviation market will register a compound annual growth rate (CAGR) of more than 16% during the period 2010-2013. Looking further ahead, the Indian Ministry of Civil Aviation’s Vision 2020 statement envisages a compound annual growth rate of around 15% in the next five years. Investment opportunities of USD120 billion are envisaged up to 2020 with USD80 billion on new aircraft. 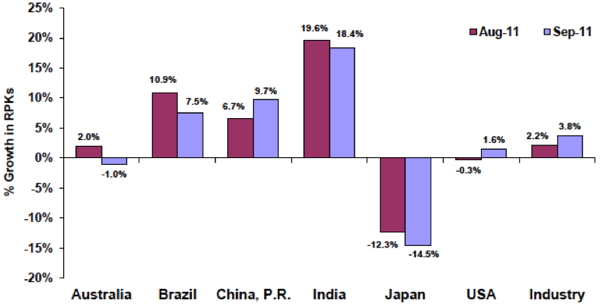 Indian President Pratibha Patil last month also noted the considerable growth in the Indian aviation market. There has been an increase from 500 weekly departures in 1994 before deregulation, to nearly 15,000 departures daily at present, a 30 times jump. In the last decade, domestic air traffic has quadrupled from 13 million to 52 million and international traffic more than tripled to 38 million.

Speaking at the inaugural session of the ICAO Air Services Negotiation Conference in India in mid Oct-2011, President Patil added the potential for the growth of civil aviation in India is “huge”. India is already the ninth largest and the fastest growing aviation market in the world and is expected to be third largest domestic market after the US and China in 2020 by when CAPA forecasts India's airports will handle 450 million passengers per annum.

As the economy grows, disposable incomes rise and the value of time becomes more precious, resulting in an increase in air travel. President Patil added that aviation plays an important role in the economic development process of countries and that "flying is no longer the prerogative of a few privileged, but an option for an increasingly broader section of society". 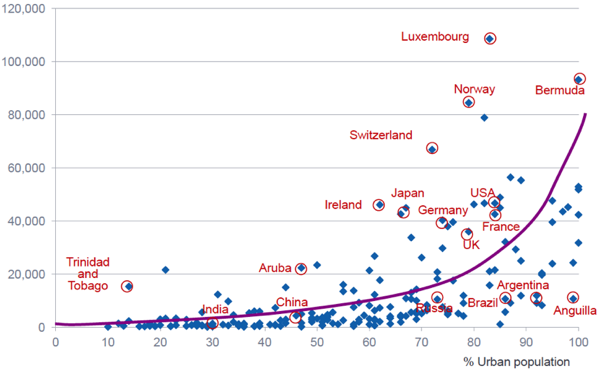 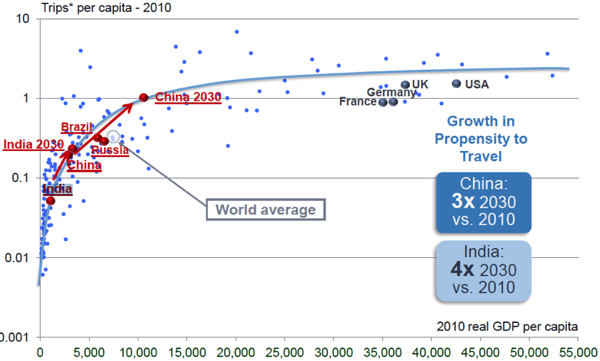 The President noted that growth is being driven by LCCs and increased domestic conditions. From a level of about 1% in 2003/04, the LCC market share today exceeds 70% of total domestic traffic.

India has bilateral air services agreements with 108 countries and 72 foreign airlines are currently operating to/from various destinations in India. Three Indian carriers are operating to 35 destinations in 25 countries. As of Apr-2010, Indian carriers were eligible to sell 711,356 seats per week on flights to/from 104 countries. They utilised only 170,914 seats per week, compared with 326,705 seats by overseas airlines.

The key challenge going forward will be to balance the burgeoning demand with capacity discipline, to ensure yields and profitability are maintained.

The issue of profitability is especially relevant at present. According to Federation of Indian Airlines (FIA) secretary general Anil Baijal, Indian private airlines, which control around 83% of the domestic market, could report a combined INR35 billion (USD716 million) loss in the six months ended Sep-2011, more than the INR29 billion (USD593 million) in losses reported in the previous fiscal year. FIA warned that further pressure could lead to the closure of one or more airlines. “We feel it will be a serious matter for the economic climate if one or two go down," Mr Baijal said. Indian carriers are expected to start reporting their Sep-2011 quarter results from around 11-Nov-2011.

The growth in the Indian aviation market is also creating significant infrastructure and investment requirements, not only for fleet growth, but in airport development, ATM technology investment and the development of support industries such as MRO, which is estimated to absorb up to USD120 billion in investment by 2020. Meanwhile, the Indian commercial aerospace market is estimated to absorb around 1300 commercial jets worth USD130 billion over the next 20 years according to Boeing, making it one of the most lucrative markets for the global aviation majors.

In terms of airport development, President Patil noted that around 60% of air traffic is being handled in airports under the Public Private Partnership (PPP) model at Delhi, Mumbai, Hyderabad and Bangalore, with the remaining 40% in airports owned and operated by the Airports Authority of India. During the period from 2005 to 2010, USD10 billion was invested in airport development in the country, and the private sector played an unprecedented role during the past five to six years, acting as a key contributor for the development of PPP airports.

In next five years, the Indian Government plans to expand the airport network and provide connectivity to tier II and III cities. In Metro cities where the existing airport cannot accommodate future growth, a second airport is being planned. Navi Mumbai is a case in point. As a policy, the Indian Government plans to continue to build and replicate the PPP model at other airports. The Government is also looking at further developing several airports in state capitals, in tourist centres and business and commercial centres. In the city side of these airports, the private sector will be invited to develop hotels, shopping complexes, cargo, parking lots, and food courts, among others.

Another area of change could be in foreign ownership, with India's Industry Secretary, R P Singh, in late Oct-2011 stating the Government is "likely" to approve plans to permit foreign airlines to invest in Indian airlines.

However, the Department of Industrial Policy and Promotion and the Civil Aviation Ministry differ on the size of the stake that foreign airlines could potentially acquire. While the Industry Ministry wants foreign airlines to be allowed to take a 26% stake (the level required for the investor to obtain a board position and have the right to block a special resolution), the Civil Aviation Ministry wants it capped at 24%.

India allows foreign investment of up to 49% in Indian carriers, but foreign airlines are not allowed to invest directly or indirectly in domestic carriers. The Cabinet will shortly consider the foreign direct investment (FDI) proposal and the Industry Ministry has circulated a draft cabinet note for inter-ministerial consultations after approval from the Civil Aviation Ministry.

Kingfisher Airlines has previously stated it supports the plan, with the carrier rumoured to be a potential IAG target, while Jet Airways has questioned the need for foreign airline ownership in the aviation sector. Meanwhile, the FIA cautions “It is important that India seeks reciprocal opening of the airline industry in other countries, before allowing open access of its market to foreign carriers".