The eruption of Iceland’s Grímsvötn volcanco could be the acid test for EUROCONTROL and European air navigation service providers (ANSPs) and the new rules and measures put in place after the last Icelandic volcanic eruption in 2010. A little more than 13 months on from the eruption of the Eyjafjallajokull volcano, Europe’s passengers and airlines will be hoping that the reaction from Europe’s airspace authorities is much more measured than it was in 2010.

Hundreds of flights have already been grounded, as ash clouds affect Scottish and Norwegian airspace, although the main eruption appears to be subsiding. More rounds of flight cancellations could come, with EUROCONTROL and other airspace authorities forecasting that ash clouds could spread to Germany, southern France and Spain later this week. Civil aviation authorities are confident that they will be able to avoid a repeat of the massive airspace closures and associated flight cancellations of last year.

Fortuitously, Europe ran an ash cloud exercise in mid-Apr-2011 to validate changes and improvements to the volcanic ash contingency plan and procedures. The exercise involved 70 airlines, 14 ANSPs, the Volcanic Ash Advisory Centre London (VAAC), as well as the European Commission, EASA and EUROCONTROL. Almost presciently, it simulated the eruption of the Grimsvötn volcano – the most active of the 31 active volcanoes in the country – and the spread of a volcanic ash cloud across the North Atlantic and southward into European airspace. Unfortunately, the assessment and debrief of the simulation is not due to be completed until early Jun-2011. 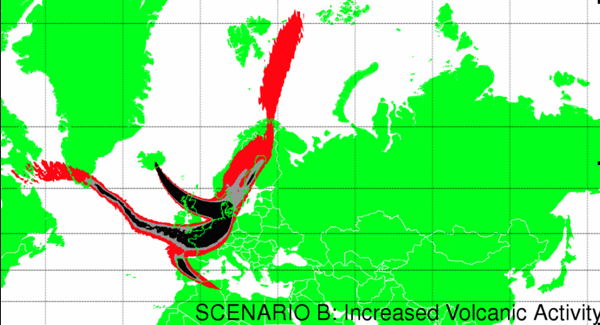 Lessons learned: A new approach after a disastrous performance

European Transport Ministries and civil aviation authorities reacted to the 2010 ash cloud threat on an individual basis, the result being the closure of large swathes of airspace – eventually stretching from Iceland down to northern Italy and across to central Russia. Safety was Europe’s primary and overriding concern, but uncertainty reigned over just what concentrations of airborne ash were considered safe for engines, based on ICAO models and guidelines. Airlines were quick to call for airspace to reopen, but authorities erred on the side of caution until test could be flown to establish new guidelines.

The Apr-2010 Eyjafjallajokull eruption cost airlines at least USD1.7 billion, through a combination of lost revenue and compensation for passengers due to delays. The second remains a point of contention between some airlines and European authorities, and has brought certain segments of European passenger rights legislation to the fore. Over six days, 100,00 flights were cancelled, stranding more than 10 million passengers. The eruption grounded 29% of global airline traffic at one point, and cut European flight traffic for 2010 by nearly 1%.

European airspace users were disgruntled with both the approach and execution of the airspace closures. They felt the European reaction was based on theoretical models rather than the actual situation. They criticized the lack of consistency in airspace closures and the absence of consultation, centralized leadership and coordination. CANSO reported that over 200,000 flights did operate in European airspace identified by the European volcanic ash advisory centres and having the potential presence of ash. Not aircraft reported significant ash presence, as verified by post-flight aircraft and engine inspections.

The eruption was also a disaster for European ANSPs, which were already struggling after two years of declining European aircraft movements. The cost to European ANSPs was calculated at up to EUR25 million per day over the six-day event, with 80% of European traffic halted at the height of the event. There were also knock-on effects, as ANSPs granted airlines flexibility on slot rules, flight restrictions and air navigation payments to provide some short-term operational and financial relief.

The event was a wake-up call for European airspace control and coordination. It was perhaps the most striking example of the inefficiency of Europe’s divided and fragmented airspace control system. The European Commission admitted that the fragmented patchwork of 27 national airspaces meant that Europe was acting with “one hand behind its back” during the crisis.

The crisis prompted the European Commission to accelerate some Single European Sky (SES) proposals, particularly adoption of the position of a European Network Manager, appointment of a FAB coordinator and implementation of a performance regulatory framework. A European ‘Aviation Platform’ incorporating key stakeholder, was formed to provide strategic advice on the development of air transport, as was a dedicated crisis cell, to deal with similar events.

European authorities were also urged to accelerate the integration of European air traffic management through the SES initiative. SES has moved forward in several key areas since the Apr-2010 eruption. Two new functional airspace blocks (FABs) have been establish, integrating the airspace of Denmark and Sweden under one FAB and the key FABEC, which covers airspace in France, Germany, Luxembourg, the Netherlands, Belgium, Switzerland. According to the European Commission, the schedule for FABs is “on track and objectives will be largely met”, with a deadline of 04-Dec-2012, a vast improvement on the FAB implementation situation in early 2010.

The European Aviation Safety Agency (EASA) now has a greater role in developing and overseeing common safety standards for Europe. The EASA’s role has also extended to now include safety regulation in the field of air traffic management.

While there have been some major victories for SES implementation thanks to the political unity generated during the crisis, much of the momentum generated for SES implementation has now been used up. In late 2010, political opposition to the targets for second phase of the SES prompted the EC’s Vice-President for Transport Siim Kallas to withdraw proposals for environment, capacity and cost-efficiency goals for European ANSPS. Eventually these performance targets were adopted in Feb-2011, but

Airline and national authorities are confident there will not be a repeat of 2010. European regulators met on 18-May-2011, calling the first meeting of the European Aviation Crisis Coordination Cell to share information on the situation in European airspace as well as on its possible evolution. The group incorporates EU Member states, the European Commission, EUROCONTROL, the EASA, representative from European ANSPs, airlines and airport associations.

The EACCC will issue a guidance to EU Member States recommending that they adopt a revised approach in line with the new guidance material for Europe developed by ICAO. This approach allows airlines to decide if they will fly in areas with areas contaminated by ash, on the basis of a safety risk assessment accepted by the relevant national supervisory authorities.

Tools for assessment of ash risk are much improved from the situation in Apr-2010. The EASA has produced new solutions for measuring ash thresholds to aid with risk assessment and EUROCONTROL and the VAACs have enhanced the meteorological models used to measure and asses the state of ash clouds. Common guidelines for the application of passenger rights legislation is also in place.

Ryanair’s Michael O’Leary stated authorities “are a bit more sensible than they were last year” and the carrier is “cautiously optimistic that they won’t balls it up again this year”. The UK and German CAAs have announced that they will work with airlines to help them avoid airspace with ash concentrations.

Lessons from the 2010 have been learnt and Europe is in a much better position to manage the challenge of ash affecting its airspace. Putting the decision whether they fly in the hands of airspace users will go a long way to ensuring there is no repeat of 2010. Safety remains the primary concern though and any natural disaster is essentially unpredictable, so ongoing disruptions cannot be ruled out.