Icelandair Group reported strong organic growth in a profitable second quarter (three months ended 30-Jun-2011) despite a 49% year-on-year increase in fuel costs. The carrier stated the outlook looks “generally good” and it is “well positioned” to address challenges ahead, aided by a “sound” balance sheet, “very positive” liquidity and a “strong” competitive position in the market.

Icelandair Group joins IAG, Norwegian Air Shuttle, Ryanair and easyJet in reporting profits in the second quarter. It is one of the most profitable carriers in the challenging Nordic region.

The Group's outlook in terms of bookings and its investment projects over the coming months is strong. The EBITDA projection for the whole year remains unchanged at ISK9.5 billion (EUR57.5 million). This would, however, be weaker than 2010 levels, but stronger than the results reported in 2007, 2008 and 2009. 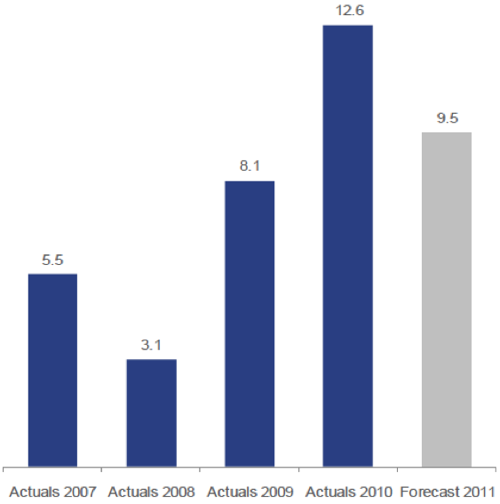 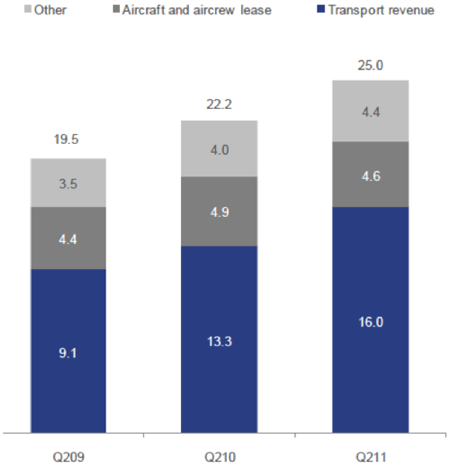 Operating costs increased 16% to EUR138.9 million. Unlike the majority of its European (and global) peers, fuel was not the carrier’s largest expense in the quarter, exceeded slightly by salaries, which increased 14% to EUR37.3 million due to increased capacity on international flying. However, fuel was unsurprisingly the fastest-growing expense, increasing 49% to EUR36 million. 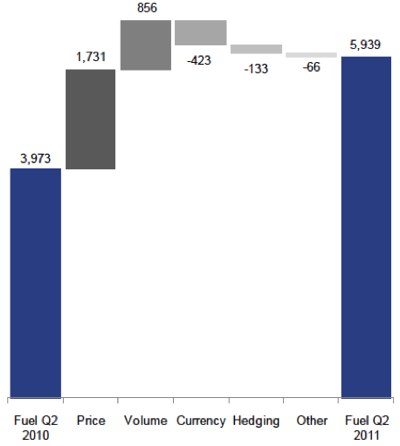 High oil prices, volcanic eruption and union action were among the challenges faced by the company.

Oil prices were on average were 47% above last year’s levels in the quarter at USD1057 per ton, resulting in a cost increase of ISK1.7 billion (EUR10.3 million). The carrier stated it manages jet fuel prices through a combination of hedging contracts, fuel surcharges and active yield management. Almost half of the projected third quarter usage has been hedged with options. 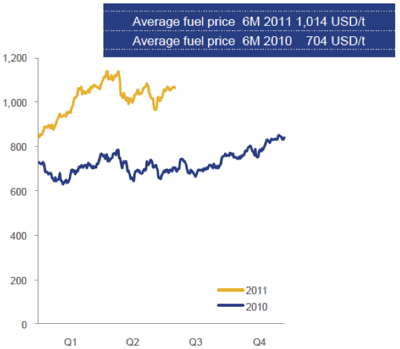 NB: The table reflects that approximately half of the estimated fuel consumption over the summer season is hedged with call options.
Source: Icelandair Group

Costs and revenue losses related to the volcanic eruption that occurred during the quarter are estimated at ISK300 million (EUR1.8 million) and revenues were similarly affected by the pilot overtime strike.

Icelandair Group stated the pilot strike came “at the worst possible time, as the training of new pilots had been delayed due to the eruption”. The carrier in Jul-2011 reached an agreement with the Icelandic Air Line Pilots’ Association, averting further strikes. Icelandair canceled about 20 flights in Jun-2011 after the union banned its members from working overtime. The action had no impact on any services in Jul-2011.

Benefiting from tourism growth in Iceland

Icelandair Group noted that bookings of services to Iceland have been particularly strong and the number of tourists visiting Iceland during 2011 is expected to reach record levels. Air Iceland has added a substantial number of flights to Greenland that have proved successful, the company said. Icelandair Group has invested in two Dash 8-200 aircraft for the Greenland route, which will replace the company’s older Dash aircraft. Loftleidir, which currently manages six B757-200s and five B767-300ERs under the Icelandair air operator certificate, also performed well and the company’s project status is “good”. Revenues at Loftleidir increased by 28% year-on-year in the quarter. 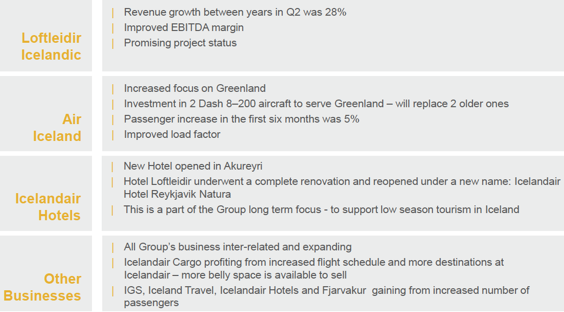 Despite international capacity growth of 25% on the second quarter, Icelandair managed to report record load factors of 79.3%, a 3 ppt year-on-year increase. The number of passengers that flew with Air Iceland increased by 14%, owing to the addition of more services to Greenland. 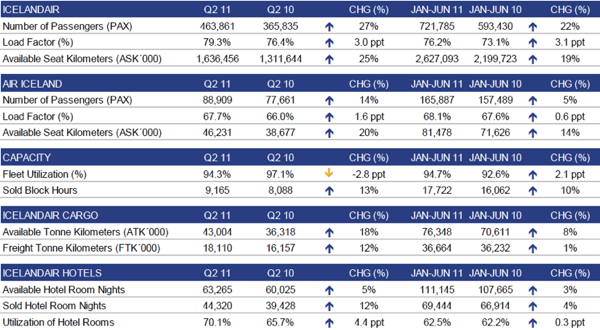 In the six months to 30-Jun-2011, international capacity increased 22%. Load factor again reached a new record, at 76.2%. The number of passengers increased in all markets, with the largest increase, 29%, seen in the North Atlantic market. There was also a considerable increase in flights from Iceland (+26%) and a somewhat smaller increase in flights to Iceland (around 13%). In terms of revenue distribution in the six-month period, 26% was from Iceland, 21% from North America, 19% from Europe and 14% from Scandinavia. 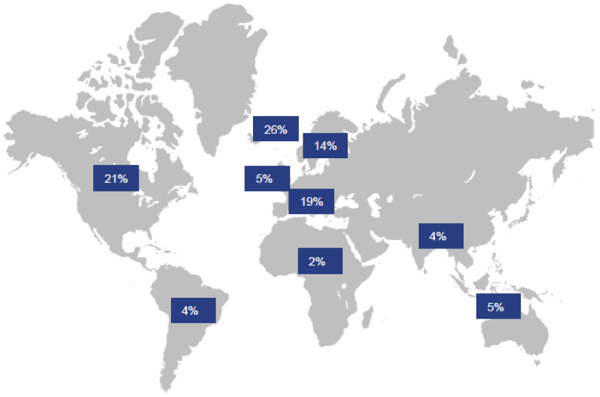 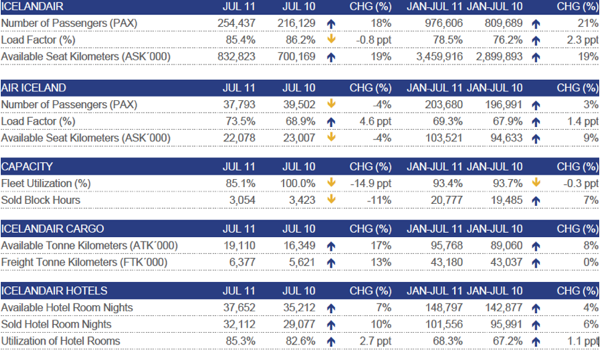 In May-2011, IG Invest, an affiliate of Icelandair Group, signed a Letter of Intent with Norwegian Air Shuttle, aimed at transferring its rights to purchase three B787 aircraft IG Invest has on order with Boeing. IG Invest is a holding company of aircraft and aircraft related assets, and has one further B787 on order from Boeing. This is Icelandair’s sole aircraft present only order. The existing fleet stands at 20 aircraft, according to Ascend data from Aug-2011.

Exploring possibility of listing in other stock exchanges in Scandinavia

The financial position of Icelandair remains strong. The equity ratio is 29% and cash and cash equivalents and marketable securities stood at about ISK18.4 billion (EUR111.4 million) at the end of Jun-2011.

In Feb-2011, Icelandaiar Group announced a resolution approved by the Board of Directors to explore the possibility of listing the company in another stock exchange in Scandinavia. This work is proceeding as planned and conclusions should be available later in 2011.

The largest shareholders in Icelandair Group as of 10-Aug-2011 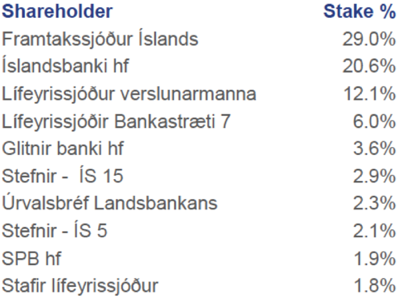 Icelandair’s share prices have been one of the most consistent among airlines in the Nordic region and the company is the sole airline operator in the region to report a share price increase over the past three months. Investors are clearly impressed by the carrier's performance this summer, which suggests the Group can look forward to strong third quarter earnings. 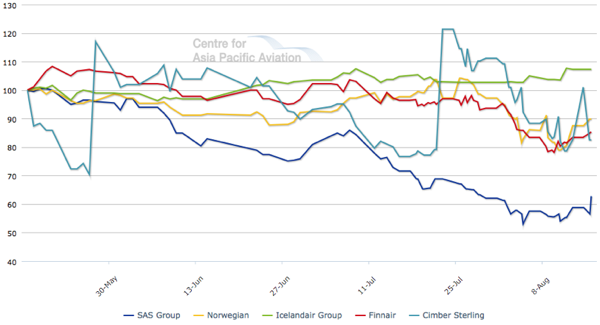