Iberia down on load factor slip, Turkish Airlines and Lufthansa also down; easyJet up marginally

Iberia (-0.5%) declined on Thursday (16-Dec-2010) after European airline shares ended the session with mixed results. The carrier declined after reporting a 0.4 ppt year-on-year slip on load factor to 77.4%. The slip was due to a 2.1 ppt decline in long-haul load factor to 80.2%. Domestic and medium-haul load factors were both up for the month.

Despite the decline in load factor, passenger traffic (RPKs) was up 7.9% for the period, with long-haul traffic up 13.9%. Domestic traffic was down 8.1%, while medium-haul load factor fell 1.1%.

Lufthansa (-0.9%) fell on news Germany’s Federal Statistical Office (Destatis) reported air transportation companies in Germany suffered a 13.6% year-on-year decline in revenue to EUR22.4 billion in 2009 adding the financial and economic crisis in 2009 had minimal effect on the number of employees and aircraft with the number of people employed in air transport down by 0.7% to 64,100 while the number of aircraft increased by 0.2%.

easyJet to increase summer 2011 capacity by 13%

easyJet (+0.2%) was among the gainers, after announcing plans to increase capacity by 13% year-on-year in its summer 2011 flying programme making it the "biggest ever" summer schedule. The carrier will operate 551 routes between 129 airports across 30 countries. In total, easyJet will fly 40.64 million seats in the summer 2011 season. 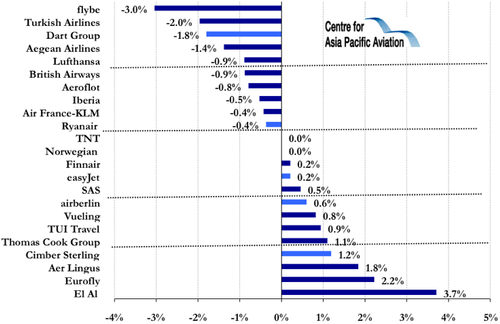