Caribbean Airlines’ 2010 acquisition of Air Jamaica ushered in high hopes that a strong flag carrier would finally emerge in a fragmented region where home airlines have been constantly propped up and protected by the governments. But roughly three years after the landmark deal that was supposed to seal Caribbean Airlines’ fate as the leading carrier in the market, the airline continues to be dragged down by financial challenges that are at least partially attributed to ill-advised expansion into a long-haul route with Boeing widebody aircraft and the continuing integration of Air Jamaica.

Although the carrier has reportedly indicated that it is seeing signs of a return to profitability, Caribbean is cautioning that a complete turn-around is two to three years away. As the carrier’s current plight illustrates, benefits of consolidation in the region have yet to surface as its weak performance continues unabated.

Stability has evaded Caribbean since its purchase of Air Jamaica as it endured a management shake-up in late 2010 with the abrupt resignation of CEO Ian Brunton, who held the position for a roughly a year.

Brunton subsequently took the helm of Liat in late 2012. After Brunton’s exit Rabindra Moonan was named chairman of the carrier’s board and has operated in that capacity for about a year.

But during Mr Moonan's tenure the carrier has faced obstacles in financing ATR turboprops and endured a shaky re-entry into the London market as the launch of service to Gatwick was clouded by certification issues with Boeing 767 widebodies it had leased from LAN. On top of those challenges now the carrier is reportedly facing mounting debt close to USD200 million and has scaled back service in some of its North American markets.

Mr Moonan recently told local news outlet Trinidad and Tobago Newsday that Caribbean’s current financial challenges were triggered in large part by financing five ATR 72 turboprops the carrier ordered in 2011 and the certification challenges of the 767s. Caribbean was forced to wet-lease an additional 767 from Omni Air International to support the Jul-2012 launch of service from its main base at Port of Spain Piarco Airport to London Gatwick. Moonan described the costs associated with the certification delays and the subsequent leasing of additional aircraft as phenomenal, but boasted that Caribbean is now recording 90% load factors on its thrice-weekly service to Gatwick.

But the carrier is likely trading loads for yields as it generally takes at least a year for long-haul flights to spool up. British Airways serves Port of Spain as an extension of its service from Gatwick to St Lucia, which creates stiff competition for Caribbean on its new long-haul flights.

It has never been clear why Caribbean opted to launch long-haul service when it was in the midst of combining its operations with Air Jamaica and cutting unprofitable flights from the combined portfolio (including Air Jamaica’s long-standing service from Montego Bay to Philadelphia). Caribbean’s execution of the new Gatwick service was weak as it opened up sales for service about four months prior to launch, which is little time to build up awareness for a significant long-haul flight.

The airline also underestimated the complexity of introducing widebodies as evidenced by the certification issues it encountered with the aircraft. Now with service underway, Caribbean is still only operating three weekly flights from Port of Spain to Gatwick after making professions that it would offer daily service. Schedules in Innovata show that presently the flights to London only represent about 2% of Caribbean’s total seats on offer. 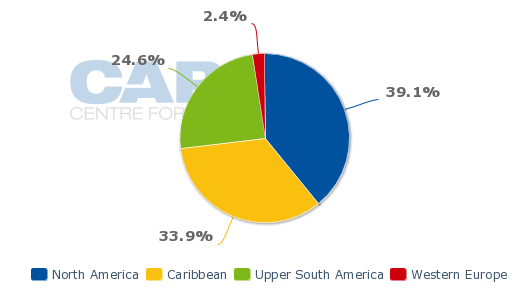 Caribbean’s decision to launch the risky new service to London while it was still digesting Air Jamaica shows that business discipline is not a focus as it works to become the region’s flag carrier. The decision to launch long-haul service during 2012 followed a reported USD53 million loss by Caribbean in 2011.

According to reports from Caribbean360.com the loss widened during 2012 to USD80 million. The deepened losses were no doubt underpinned by the ill-advised relaunch of service to London, a route Caribbean’s predecessor BWIA served until 2007.

Air Jamaica also abandoned its Kingston-London Heathrow flights in 2007 after losing more than USD25 million on the route during the previous year. Caribbean ignored Air Jamaica’s unsuccessful attempts to operate service from the region to London, and now is struggling to find financiers for its mounting debt. Perhaps the carrier should set pride aside, cut its losses and try to offload the widebody aircraft that helped it dive deeper into the red during 2012.

Jamaican pride is bruised as Caribbean pulls back service

Service cutbacks by Caribbean on operations to Jamaica and on the Montego Bay-Kingston route have also flared some political tension as the Antigua Observer recently reported that the Jamaican Government was threatening to yank Air Jamaica’s branding from Caribbean. The Air Jamaica brand still exists through an active website, but most of the settings default to Caribbean’s site and Caribbean operates all the routes within the combined network.

The Jamaican Government still has some influence over Caribbean as it retained a 16% stake in the carrier after the Air Jamaica sell-off. The Government of Trinidad and Tobago owns the remaining portion of the carrier.

Caribbean is the only carrier operating service from Port of Spain to Kingston and the sole airline offering intra-Jamaica service between Montego Bay and Kingston. It would appear the cuts are meant to prop up sagging loads in those markets referenced by Caribbean’s management – another telling sign of the carrier’s continuing weakness as it seems unable to properly manage routes where it holds a monopoly status.

Caribbean is also trimming frequencies on its North American routes from Kingston to Fort Lauderdale and New York JFK and from Montego Bay to New York JFK.

Schedules in Innovata show that Caribbean competes with JetBlue Airways on all those routes. Spirit will also operate service from Kingston to Fort Lauderdale in May-2013 and Delta also operates service between JFK and Montego Bay.

Presently, Caribbean is the second largest airline operating between the US and Jamaica in regards to seats on offer, holding an 18% share behind American’s 22% share. Given its decision to decrease supply in certain markets, it is not clear if Caribbean has been able to retain strong point-of-sale on those routes among Jamaican nationals.

But with estimated GDP growth of just 1% in Jamaica during 2013 and high inflation, outbound demand is likely weak on those routes. Caribbean’s US competitors have the advantage of strong demand for inbound service from both visiting, friends and relatives (VFR) traffic and pure leisure traffic. 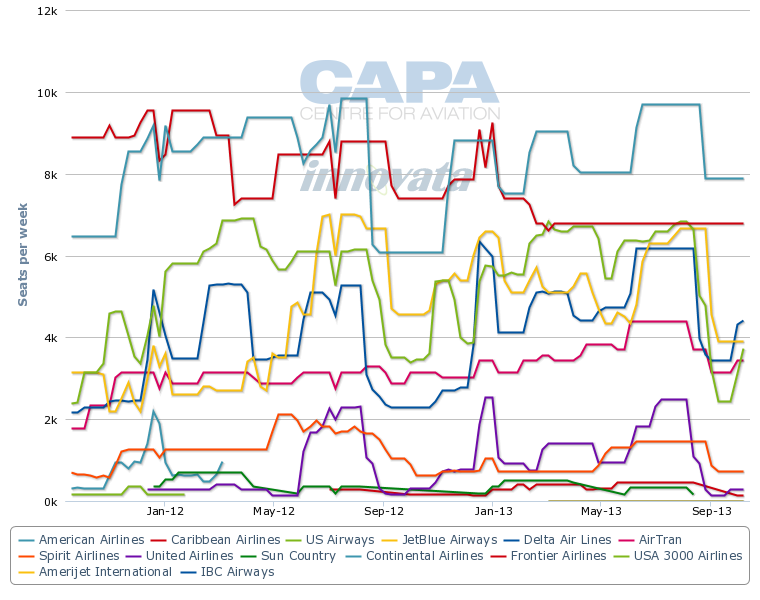 All of the issues plaguing Caribbean could have been prevented if the carrier opted to exercise some restraint in unprofitable expansion too soon after absorbing Air Jamaica. The business case for launching long-haul service to London was weak, but the carrier pressed on in order to prove its stature as the leading airline in the region.

The long-haul experiment has failed, and the airline business environment in the Caribbean remains status quo as governments continue to enable illogical business decisions by airlines in the region. As the 2012 demise of upstart pan-Caribbean LCC REDjet illustrates, liberalisation remains unwelcome by governments in the region. The result is the continued perpetuation of governments tightly protecting the traffic rights of their loss-making carriers – in other words, business as usual. 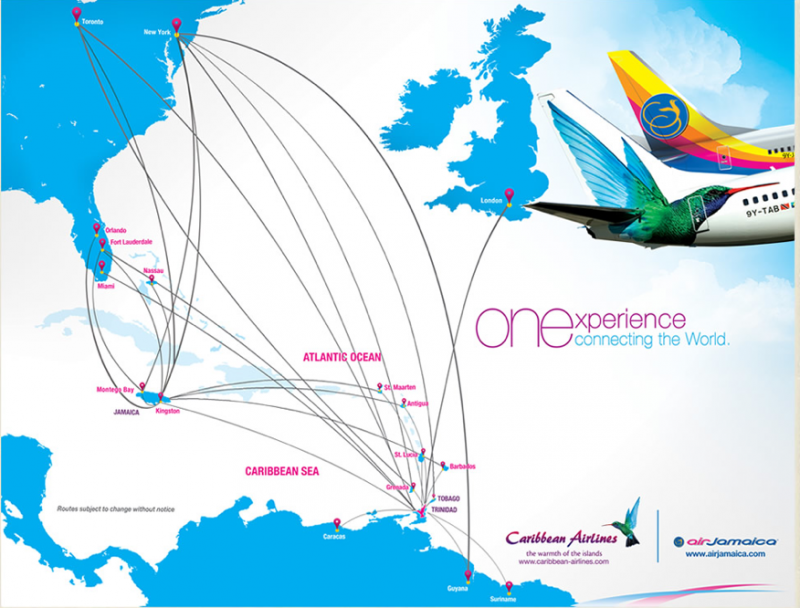