Rumours are growing that the UK's Labour Party will try to block the construction of a third runway at London Heathrow Airport (LHR R3) when it is debated by Parliament at a so far unspecified date in the first half of 2018, on the grounds of ‘environmental concerns’.

The current Conservative minority government previously accepted the recommendation of the Airports Commission which in Oct-2016 opted for an additional runway at Heathrow over the expansion of Gatwick Airport, nominating the northern runway preference over an alternative proposal that would extend a runway for dual take off and landing operation.

Now suggestions are even re-emerging of a renewed focus on using regional airport expansion instead of a Heathrow solution.

Environmental implications of the third runway are still under review

Final agreement on the runway (i.e. the Parliamentary vote) had been deferred while more work was carried out on the environmental ramifications of LHR R3, most of the additional emissions perceived to be coming from surface transport rather than from aircraft. While most of the airlines continue to be supportive this delay has also presented them (led by IAG) with an opportunity to question the cost of the runway and associated works (GBP16.5 billion), how it is going to be financed and what it will mean for airline charges both now and in the future.

It is already one of the most expensive airports in the world. Even British Airways’ former CEO Rod Eddington has weighed into the debate stating that Heathrow needs a new runway but if it isn’t affordable it risks driving traffic away from the airport, not attracting it.

On the other hand, the weight of opinion within UK corporations continues to back Heathrow’s expansion. So ‘big business’ (and SMEs) are backers but not all the Conservative MPs (traditionally the party of business) are. There are at least 60 Conservative MPs that are ideologically opposed to LHR R3 – many of them on account of their constituencies lying on the flight path, and they are led by Foreign Secretary (and previous London Mayor) Boris Johnson, who probably still covets his dream of a new airport in the Thames Estuary, and Justine Greening, who was once Secretary of State for Transport.

Another ex-Transport Secretary, Philip Hammond, now the Chancellor, always plays his cards close to his chest but he is at best lukewarm and has backed Gatwick in the past. In 2010, while he was Transport Secretary, he made a statement to a newspaper in which he said a third runway at Heathrow was “dead. Dead as a Norwegian parrot”. (A reference to a well known sketch in a 1969 ‘Monty Python’ television comedy show).

The unusual situation has arisen where there is probably less support for Heathrow in London itself than there is in some of the provinces (though not all of them – much of the Northwest [Greater Manchester] and West Midlands [Birmingham] prefer the claims of their own airports to aid the economy).

Scotland is a major supporter of Heathrow expansion, as is Wales and the northeast of England (Newcastle), a region that has not fully bought into the concept of the ‘Northern (economic) Powerhouse’ that was championed by previous Chancellor George Osborne. London in comparison is now essentially a liberal, soft left metropolis, led by a Labour Mayor, Sadiq Kahn, who has adamantly and consistently supported London Gatwick Airport over Heathrow. 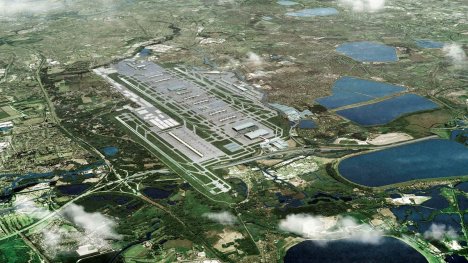 Source: Heathrow Airport Ltd. The new northern runway is to the ‘southwest’ in this enhanced photograph, which is taken from the northwest.

A minority government will struggle in controversial issues

It was always the case since the 08-Jun-2017 election that Prime Minister May was going to struggle to get some policies through Parliament. The government presides over a hung parliament, 10 seats short of an overall majority, and the Queens Speech that re-opened Parliament for its legislative session was toned down accordingly, not even mentioning Heathrow while other critical transport infrastructure like the HS2 high-speed rail line was.

Specifically, the Conservatives also excluded LHR R3 from its election manifesto after threats from some of the party’s backbenchers to disavow it. There were also fears it would have lost voters in crucial London marginal seats which the Liberal Democrats wanted to take from the Tories.

But by doing so they have now created a rod for their own back in the wake of the unexpected election result of large Labour gains and the resulting minority government that is dependent on the Democratic Unionist Party of Northern Ireland to get the government through major Parliamentary votes.

Moreover, the Conservative’s own arch-protagonist where Heathrow is concerned, Zac Goldsmith, has been re-elected and can again lead resistance to LHR R3 from within.

Ironically, it could leave the Prime Minister dependent on the support of a depleted Scottish National Party and rebel MPs in other parties as she tries to push the plans through Parliament. The SNP is unlikely to support the Conservatives on most issues but on this particular one it just might.

So with a split governing party, much still rests on the will of the second largest party, Labour, to support LHR R3. But its leader, Jeremy Corbyn, has been ambivalent on the matter as he is on many subjects. His Shadow Chancellor, John McDonnell, is anything but. Mr McDonnell is an outspoken critic of Heathrow expansion and in 2009 he famously stole the mace from the House of Commons in a protest over the then government's refusal to allow a vote on the issue.

A certain pragmatism has returned to Labour since the Jun-2017 election. It really does believe it can force a second election on a wounded Conservative leader, and win it. Hence the expediency of this sudden declaration against Heathrow, and the one that preceded it by a few days, in which Labour declared, as ‘Brexit’ talks resumed, that it now supports the UK staying in the Single European Market.

The battle lines are being drawn for another election, differentiating the parties in what has again become a two-party political contest as smaller ones have wilted. Whether or not one takes place before 2022 (the next one due under the Fixed Term Parliaments Act) one thing is for sure: the air transport industry in the UK will continue to suffer from the collective failure of British politicians to make a strategic decision in the national interest, something at which they are as much an undisputed world champion as Floyd Mayweather. The six decades it has taken to get this close to a conclusion on the addition of just one single runway in the southeast of England looks as if it could easily stretch to seven.

Perhaps regional airports will be back on the agenda again

And the real irony here is that the latest in a long line of Transport Secretaries, Chris Grayling, has made it his business to put regional airports at the top of the agenda in a future aviation strategy to 2050, on which initial consultation work began in Jul-2017 and which will run through to 13-Oct-2017. Grayling announced the strategy at Manchester Airport, at the launch of a GBP1 billion programme to double the size of the airport’s Terminal 2.

Manchester was one of the provincial airports that was unceremoniously and condescendingly kicked into the long grass by the Airports Commission in favour of its preference for Heathrow expansion (another was Birmingham) though Manchester Airports Group did itself no favours by focusing almost exclusively on London Stansted Airport in its submission.

Having been ignored for so long could the regional airports belatedly have the last laugh?