Hawaiian air services see dynamic change over the decades, with more to come

Hawaiian Airlines has again expanded its mainland routes, recently announcing that it will begin service between Kahului, Maui and San Jose, California. This is just the latest addition to a long history of airline service between the mainland and the Hawaiian Islands. And after some years of declining numbers, access to the Islands has never been better or more diverse.

Hawaii has been a dream vacation spot for many Americans for decades. But the Islands hold the title of being among the most remote on earth—farther from other landmasses than any other island grouping regularly visited.

Naturally, the first access was by sea but as soon as aircraft had adequate range, increasing numbers of visitors flew. Up until the second generation of B747s appeared, Honolulu was a necessary stop for airlines crossing the Pacific, though these foreign carriers only had on-line stopover traffic authority.

The chart below compares mainland-Honolulu flights over a 36-year period, beginning with 1975, before deregulation. Like all other route authority in the US, Hawaii rights were granted by the CAB and only a certain number of airlines had such authority. In terms of domestic service, the two top operators were United and Western. Both Pan Am and Northwest had traffic rights for both point-to-point flights as well as having local traffic rights on international services. The vast majority of flights originated on the West Coast

Deregulation brought change and more service from the East

But by 1985, seven years after deregulation, things had changed considerably. Atlanta, Denver and Toronto hubs had been added but New York, Portland, San Diego and San Jose had all lost nonstop flights with passengers routed over the much-expanded seat offers at both San Francisco and Los Angeles. American had entered the market in a big way, as had Continental which fed its Continental Micronesia services from Honolulu (HNL). 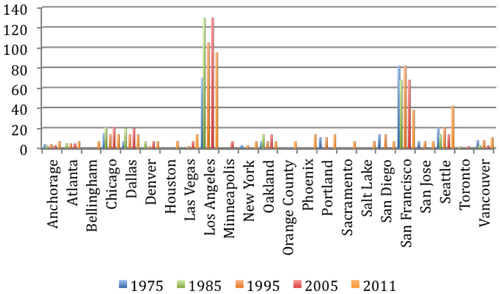 With very few exceptions, all passengers at least transited HNL when visiting the islands. United operated a Los Angeles-Lihue-Honolulu-Los Angeles circle route but that was a minimal exception to the norm. And as a memory of a different US market, Delta, still with a DFW hub, operated more nonstops from Dallas than it did from Atlanta.

Ten years later, in 1995, the picture had again changed. Western was gone and replaced by Delta, and Hawaiian, previously just an interisland carrier, had begun regular service to the mainland. Yet most of the service was still operated from the coastal west, and aircraft continued to be big; B747s, DC-10s and L1011s.

The new carriers also included new, low cost entrants. Both Rich International and American Trans Air had been around for some time and in the early 1990s both left their charter roots and entered the scheduled market. Rich tried to capitalize on Hawaii’s leisure demand and dipped its toe into the pool by flying primarily from second tier airports while ATA challenged the incumbents at the larger, more traditional, airports.

Rich had a very short market history. Following the ValuJet crash in 1995, FAA inspectors found some anomalies with Rich and it was gone by 1996. ATA lasted until 2008 when it too, succumbed to the economic unraveling at the time. Its assets now belong to Southwest, which bought them during ATA’s bankruptcy.

But by 1995, more scheduled services were being operated to Kahului, Maui as well as Honolulu—a hint of greater change that was soon to come.

By 2005, the list of players had once again been altered and the number of Hawaiian destinations with nonstop service continued to grow. Far more hubs had service to the islands; New York and Houston with Continental, Minneapolis service by Northwest and United again added Denver.

But the biggest innovation can be credited to Aloha Airlines, another interisland carrier with designs on mainland routes. However, they applied a different approach by utilizing long-range B737-700s on thinner routes to secondary mainland airports and pioneered direct service to/from a number of alternative Hawaiian airports.

In the Bay Area, nonstop service was available not only at SFO but also at Oakland and Sacramento. Many trips to Hawaii now avoided Honolulu entirely and the nature of package tourism changed as a result of these new services.

Though Aloha entered bankruptcy for the first time in 2006, disappearing entirely in 2008, others adopted its use of smaller aircraft, and on many routes from California, Oregon and Washington the B737 became the standard. From major cities like Los Angeles and San Francisco, B757s replaced many of the larger aircraft, allowing for fewer seats per flight but more frequencies.

All of this brings us to 2011 and a mainland--Hawaii network that includes nonstops from 19 US mainland points, as well as Anchorage and Vancouver, to five airports in the Island chain. With over 42,000 weekly seats, Los Angeles leads the capacity race as many Angelinos regularly travel to Hawaii, and making it a route that most legacy carriers want to have in their network.

Aloha has been replaced by Alaska, which uses its B737-700s and -800s for all Hawaii services. Continental does the same from Orange County, south of LA.

2011 flights to Hawaii other than HNL, by frequencies per week 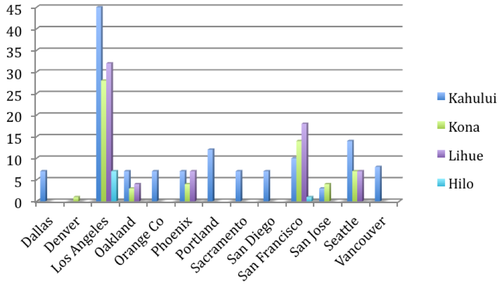 The diffusion of traffic to other airports has taken a toll on passenger numbers at Honolulu. In 1995, the airport handled 14.2 million “overseas” passengers. By 2005, that number was 12.7 million. But at Kona, the numbers almost tripled in the same decade.

And according to CAPA rankings data Honolulu-Kahului traffic is the 16th busiest route in the US.

The final chart shows the change in visitors from North America in the first decade of the 21st century. The western US continues to grow as a source of visitors, partly because of proximity and an abundance of flights. Travelers from the eastern US have much longer journeys, especially if they originate in non-hub cities, and for many on the Eastern seaboard, the sun is much closer in Florida or the Caribbean. The journey from New York to Honolulu is only 27 miles less than a flight from New York to Istanbul.

Canada has shown impressive growth as WestJet operates low cost flights from Vancouver and the Alaska Airlines flights from Bellingham are designed to attract Canadians, an airport just 50 miles from downtown Vancouver.

Southwest has made no secret of the fact that it may at some point enter the Hawaiian market and its new B737s have the range. Plus, as we have seen in past articles, Southwest dominates many coastal routes and has a solid customer base on the west coast from San Diego to Seattle.

Se related article: The busiest US air market is dominated by Southwest as others continue to cut-back

Given that the industry continues to restructure and consolidate, the network of Hawaii services will also evolve. Recently, as part of its “cornerstone” business model, American decided to discontinue its SFO-HNL flight after a presence in the market for a quarter century.

In 2015, the charts will doubtless again show change in this popular and volatile market.