Most Asia Pacific airline share prices fell yesterday, 5-May-2010, as markets across the region fell in response to European debt concerns. Many airline shares were not traded, as there was a public holiday in South Korea, Japan and Thailand.

Hainan Airlines, which earlier this week relaunched its Deer Air subsidiary under a new brand, Capital Airlines, based in Beijing, enjoyed a 2.5% increase on the day. The Hainan Airlines Group, together with state-owned Beijing Tourism Group simultaneously injected CNY1.5 billion yuan into the carrier in the ration of 70:30.

China Southern, which yesterday announced shareholder approval of a second round of government capital injection of up to CNY10.75 billion, continued to move in positive territory, up 1.2%. Air China

Taiwanese airline stocks were mixed, as Taiwan faces increasing inflationary pressures and the overall index fell almost 3%; China Airlines was down 2.7% and EVA Air (+2.5%) moved almost the same percentage in a positive direction. After trading concluded, the aviation regulator agreed to increases in fuel surcharges, effective 17-May-2010. For short haul services a USD2.50 surcharge will be added, and USD6.50 for long haul. EVA had last week issued a very strong Mar-2010 quarter result and announced a share issue.

Australian regional carrier, Skywest Airlines, whose stock tends to be volatile, showed the biggest fall on the day, losing 9.1%. Virgin Blue (-2.8%), also continued its decline after this week issuing a downbeat outlook and profit warning, joined by Qantas (-2.2%) as Australian markets slipped. 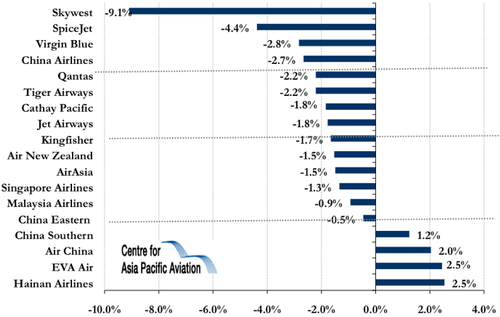 Source: Centre for Asia Pacific Aviation & Reuters
*Yesterday, 05-May-2010, was a public holiday in South Korea, Japan and Thailand