North and South American shares were mixed on Friday (11-Mar-2010), despite IATA cutting its industry losses forecast for 2010 and the wider US market rallying for a third consecutive day.

The Dow (+0.4%) was boosted by bullish comments from Citigroup CEO, Vikram Pandit, in which he stated he expects the bank’s return on assets in its core businesses will rise this year. Oil prices were meanwhile flat.

US traffic in 2009 at lowest level since 2004; Southwest and American lead passenger numbers

The US Bureau of Transportation Statistics (BTS) reported the number of scheduled domestic and international passengers on US airlines in FY2009 declined by 5.3% year-on-year, dropping to 703.9 million, the lowest annual total since 2004. However, the full-year system load factor of 80.4% and the domestic load factor of 81.1% were record annual highs. US airlines carried 5.2% fewer domestic passengers and 6.3% fewer international passengers.

Hawaiian Airlines not to be affected by Allegiant services

Hawaiiian Airlines (+0.5%) was also up marginally after Helane Becker at Jesup & Lamont reiterated the carrier’s ‘Buy’ rating. The group estimates 1Q2010 earnings per share (EPS) of USD0.02 vs USD0.46.

Jesup & Lamont added Alegiant’s (-0.3%) potential new service to Hawaii would not compete with Hawaiian’s service primarily, as it does not expect Allegiant to have the scale or scope of service that Hawaiian has. 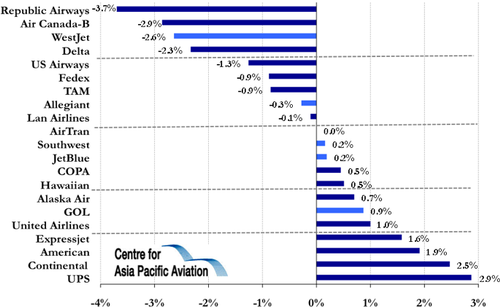