In the boom years leading up to the economic crash, Las Vegas was one of the fastest growing cities in the US. Its climate and relatively low housing prices attracted job seekers and retirees, fuelling a run-up that burst in spectacular fashion when things turned sour. Companies cancelled conventions and trade shows and leisure travellers bought food instead of gambling junkets.

The city leads the nation in lost housing value with current prices having fallen more than 58% from their peak, making the city designed to attract winners, a loser. In the mid-2000s, the airport was registering 44.3 million passengers with a better than 6% growth rate. In 2010, that number had fallen to 39.8 million, a slight decline over the previous year.

Revenues at the airport were down across the board in 2010 and US Airways, merged successor to America West, which was based in Las Vegas, considerably drew down its presence at the airport, adding to the bad news.

The airport is owned and operated by Clark County, in which the city is located. Since the airport is a key component in overall metropolitan economic recovery, the Department of Aviation feels the need to continue investment as the region looks forward to better times. In its 2010 annual report there is muted optimism as the “airport is predicting a slow but steady economic recovery over the next five years”.

Las Vegas is not like other places. Its primary industry is hospitality, ranging from individuals coming to play the slots to the inundation that is the annual Consumer Electronics Show, one of the world’s largest trade shows; attracting well over 120,000 visitors. With gambling, headliner shows and endless conventions, frequent and reasonable air transportation is a vital component of the city’s health.

As such LAS is the only airport in the top 30 dominated by a low-cost carrier, Southwest. It is also a key point in the networks of two very-low-cost operators, Allegiant and Spirit.

Southwest flies multiple frequencies and is the only player in many city pairs. To Southern California, probably the largest customer pool on which LAS draws, Southwest dominates at LAX and provides the only service from LAS to Ontario, Orange County and San Diego. Only at Burbank and Long Beach does it face off with JetBlue.

Allegiant brings passengers to Las Vegas from a diverse and interesting number of small US cities, including four destinations in sparsely populated North Dakota. Allegiant’s frequencies are not daily, and from many points, sold only at a package price that includes minimally a hotel and/or car. The paucity of legacy carrier’s service is shown in the following chart. Almost 60% of the seats are provided by non-legacy operators, a percentage unseen at any one of its 29 peer airports on the ACI list. 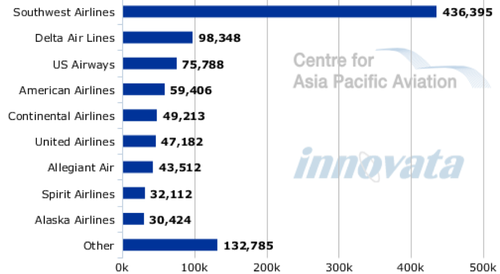 Not your average airport

Additionally, the airport sits within eyeshot of the Strip and its many attractions, giving it an accessibility rarely seen elsewhere. The terminals, replete with metallic palm trees, offer the ability to lose (or win) those last few pennies in slot machines located throughout the facilities. Like the city itself, the airport is an “experience”. 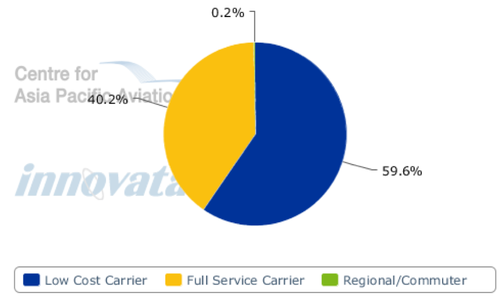 While there is some international service, most of those flights are cross border to Canada or Mexico with an intriguing mix of long-haul carriers that includes BA and Virgin Atlantic, Philippine and Korean – not the usual suspects. 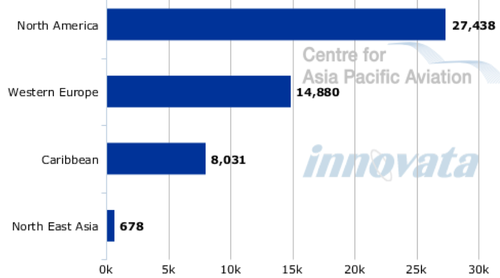 There are also a number of European charter carriers like Condor that fly to LAS. To Canada, WestJet, yet another LCC, is a big player and to the south Mexico’s LCC Volaris serves LAS.

While hosting a great many visitors and high volume, Las Vegas is known for its low margin traffic and price competition. The really high rollers bring their own jets. As a result, stemming both from the clientele and the carriers that dominate, fares are generally quite low. An average round-trip from LA costs between USD100 and USD200, a bargain compared with most short-haul fares. 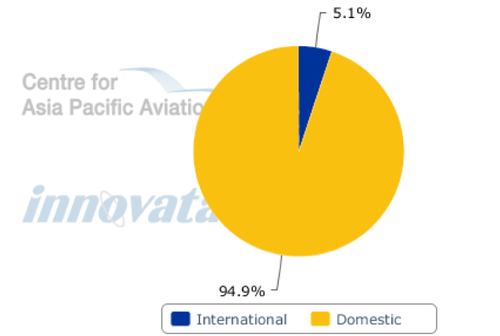 As might be expected, the alliances hold little sway in the market, with the majority of the airport’s service being provided by unaligned carriers. Again, a major deviation from the pattern that has been displayed at every other airport examined. 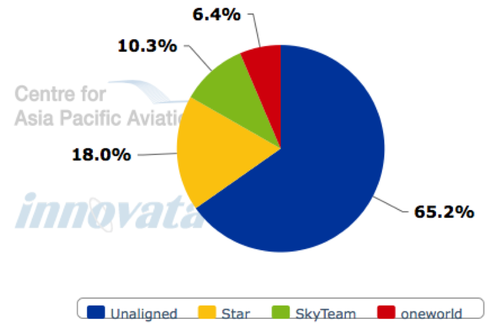 A visit to the Las Vegas Convention and Visitors Authority site confirms the fact that the city is in a weak – but uneven – recovery. The success of Las Vegas depends on disposable income, either individual or corporate, along with the willingness and ability of those potential customers to consider such expenditures.

While on the wish list of many foreign visitors, Las Vegas is primarily a destination for Americans, and their sense of wellbeing will determine the pace of Las Vegas’ recovery.

Year to date traffic figures show a passenger increase of less than 3%. Whether that will be good enough to keep LAS in roughly the same position in 2011 is still hard to predict. But long term, rising stars in Asia and the Gulf may make it hard for Las Vegas to regain its previous position in the global numbers game.