International passenger traffic recorded renewed expansion in May-2011, after a soft patch during the preceding three months. Traffic increased 6.8% year-on-year in May-2011 to be 4% higher than at the beginning of the year. Conversely, freight traffic declined 4% against the post-recession peak of the restocking cycle in May-2010. However, recent months show a renewed upward trend following weakness over the past three months with freight volumes now 2% higher than at the start of 2011. 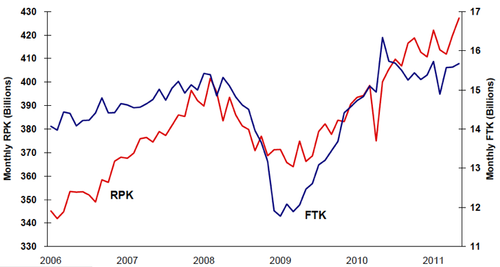 The positive developments in air transport volumes in May-2011 will help to alleviate some of the pressure on profits from continued high fuel prices, IATA’s Director General and CEO Bisignani Giovanni said. “But there are risks associated with political unrest in the Middle East and the European currency crisis. We still expect the industry to make USD4 billion this year. That is a pathetic 0.7% margin and another shock could alter the industry’s fortunes dramatically. It’s another tough year for a very fragile industry,” he cautioned.

While air transport demand is continuing to expand during 2Q2011, the expansion of air travel has entered a slower phase since 4Q2011. Up to that point the post-recession expansion had been at an average annualised pace of more than 8%.

Since 4Q2010 the trend, through a very volatile month-to-month path, has been at an annualised pace of 4%. If growth in the remaining seven months of the year carries on at that pace, then average 2011 growth would be 5.9%. IATA’s current forecast of 4.4% for 2011 anticipates slower growth in the trend during 2H2011, due to slower economic growth and the impact of high fuel prices. 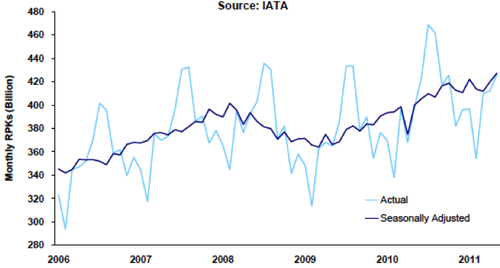 Large regional differences remain in traffic trends. The passenger traffic carried by African airlines has rebounded strongly since Feb-2011 but since the decline was significant, the year-on-year comparisons still look weak.

Asia Pacific airlines show much variation within the region but overall the still weak Japanese markets are holding down growth for the region as a whole. Latin American airlines saw the fastest growth in their markets in May-2011, as strong economic growth and expanding trade boosted both domestic and international markets for these airlines. In between were airlines from Europe and the Middle East. Unusually, European airlines added capacity and passenger traffic at a faster rate than airlines from the Middle East in May-2011. 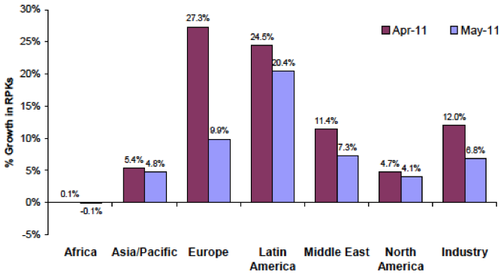 Load factors rebound strongly in May-2011

Load factors also rebounded strongly during May-2011, continuing the partial recovery seen in Apr-2011, meaning that over the preceding two months, all of the previous losses were recoverred. This is partly the result of a more stable addition of capacity compared with the recent fall then rise in traffic. Nonetheless, passenger load factors were no higher than a year earlier and slightly down on 3Q2011 levels. Meanwhile, assets are, concerningly, starting to be under-utilised, particularly on freight markets, putting downward pressure on airline profitability compared to the peak in 3Q2010. 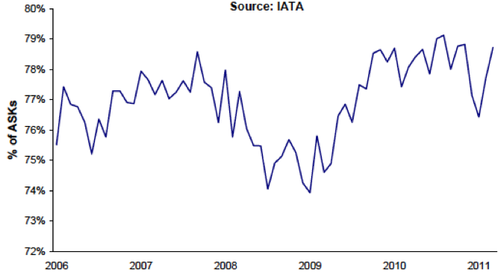 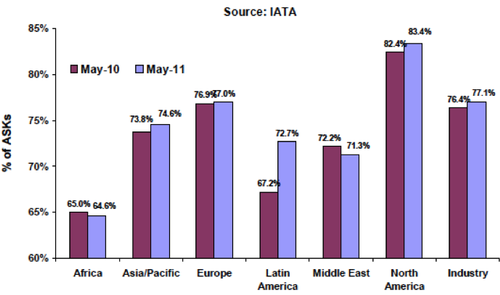 Traffic up on a month-on-month basis

On a month-on-month basis, both international and domestic air travel rose strongly in May-2011, partly due to rebounds from earlier demand shocks. Moderate capacity expansion led to a significant improvement in load factors. Meanwhile, domestic freight remains soft but there was an encouraging rise in international freight volumes.

The strength in international markets is also partly due to a strong rebound in the traffic carried by African airlines, following the sharp decline in Feb-2011 at the onset of the unrest in Egypt and Tunisia. Flights and travel remain below normal for those markets but for the African airlines traffic volumes have rebound 16% from the Feb-2011 lows to a point just under 5% weaker than pre-unrest levels. 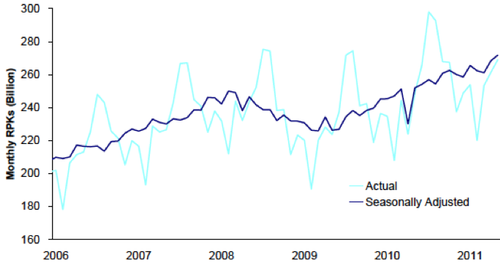 Airlines from other emerging regions in Asia Pacific and Latin America were also expanding strongly in May-2011. A divergence is developing between airlines in Europe and North America. European airlines, despite some very weak home economies, expanded both capacity and traffic strongly in May-2011 by over 10%. In contrast North American airlines have been cutting international capacity for the past two months and seeing much slower growth in traffic. 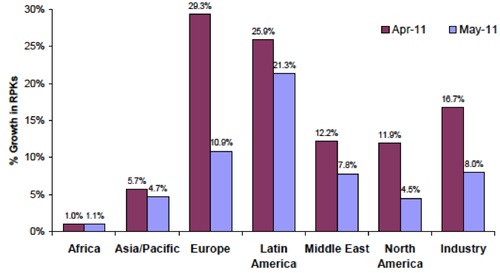 As traffic has rebounded sharply, load factors have also recovered the majority of previous losses on international markets. Seat utilisation on international markets is still slightly down on the peaks of 2010, but the impact on unit revenues and supply-demand conditions will be very positive for 2Q2011 results compared with 1Q2011. 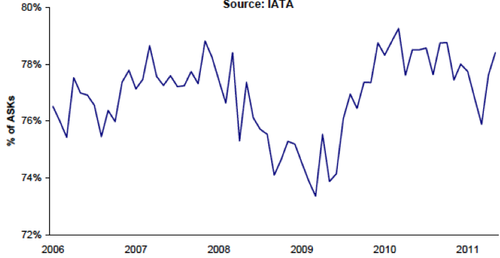 With the most consistently cautious capacity additions on international markets, airlines from North America have also sustained the highest load factors. Load factors remain the weakest for the African airlines which will make it much harder, in the face of high fuel costs, to sustain profitability. 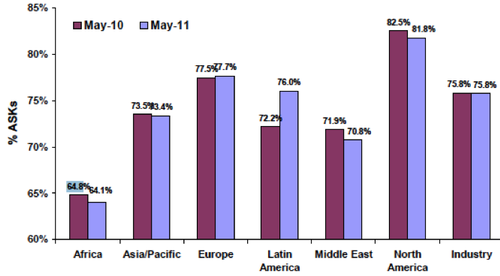 Most domestic travel markers up strongly in May-2011

However, within that total there are very different market experiences. The large US domestic market, which represents half of the total, saw relatively good growth, rising 4% year-on-year, despite the concerns expressed recently about a faltering in the US economy. However, by contrast with the emerging markets this very mature market is still growing very slowly. 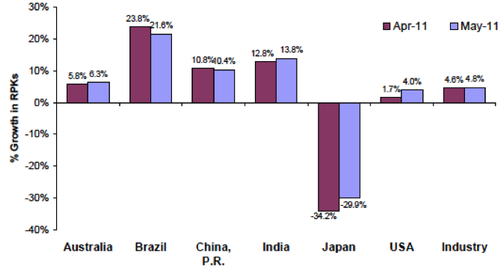 Japan’s domestic recovery from the 11-Mar-0211 earthquake and tsunami could have started in May-2011, according to IATA, with a 4.4% month-to-month rise, although there is a long way to go with levels still down by almost 30% on a year-on-year basis.

At the other extreme is the volatile Brazilian market, up above 20%. Strong growth also continued to be evident in the Indian domestic market, boosted by the strong economy, with year-to-date growth of 18.5% - the strongest domestic market in 2011 so far. The Chinese market has slowed, although remains more than 10% up on last year, under the influence of tightening economic policy. 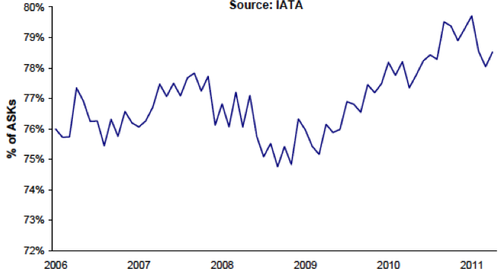 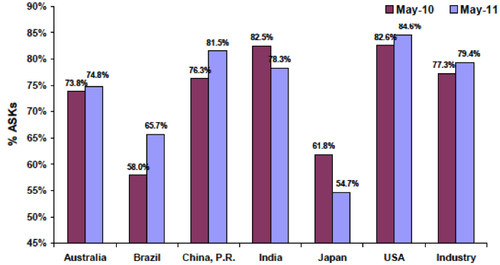 Having stagnated for almost a year, after peaking in May-2010, the air freight market is finally showing signs of renewed expansion.

Air freight markets showed a 4.0% decline in May-2011. This is skewed as a result of the May 2010 peak for of the post-recession restocking cycle. Since the beginning of the year, freight volumes have increased by a modest 2.0%. This is lower than the 5.5% IATA forecast for 2011. The trend now visible through the volatility of Jan-2011 and Feb-2011 reveals annualised growth of just over 4% between 4Q2010 and May-2011.

If this pace of growth persisted through the remaining seven months of 2011, then average growth in 2011 would be less than 3%, which is considerably weaker than the 5.5% growth IATA is currently forecasting. Since world trade is still growing at a pace of 6% there remains the scope for acceleration in air freight in 2H2011, according to IATA. However, IATA noted that “at present it certainly looks as though our current forecast for freight growth looks too high”. 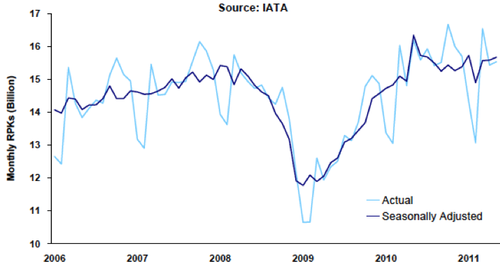 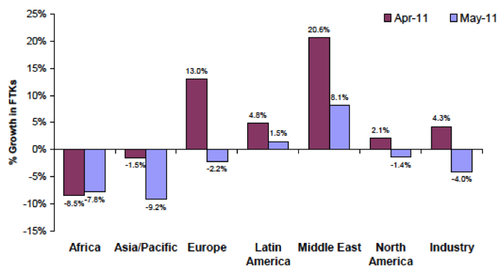 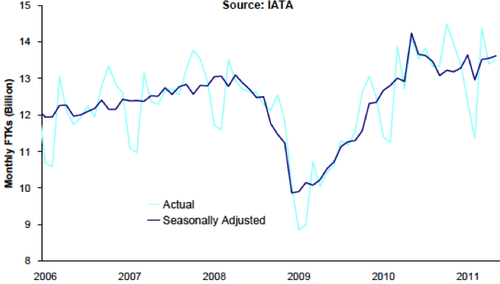 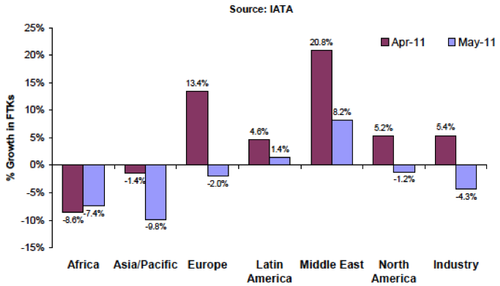 Meanwhile, freight load factors rose a little in May-2011 on international air freight markets. However, the level of freight capacity utilisation in May-2011 was still 4% points lower than the peak in May-2010. More importantly the trend over the past six months still appears to be downward, as capacity is brought on to the market at a faster pace than the rebound in traffic volumes. 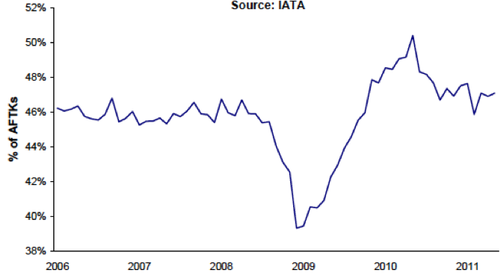 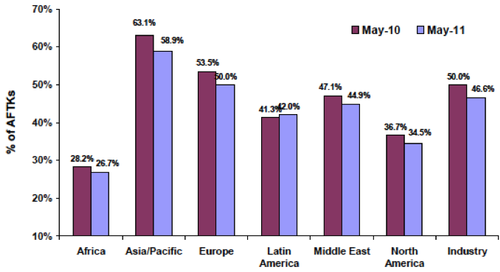 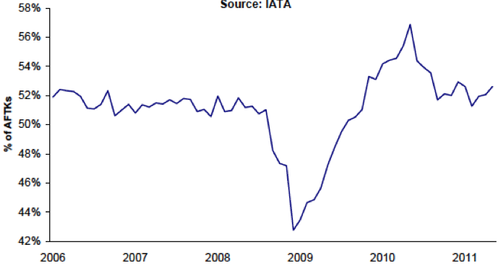 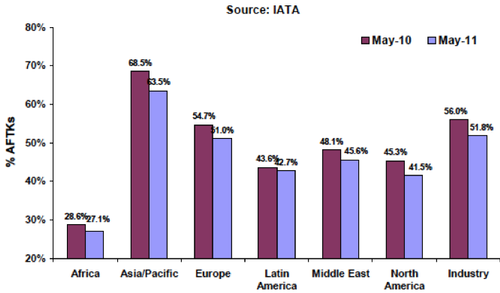 Passenger markets by region: May-2011 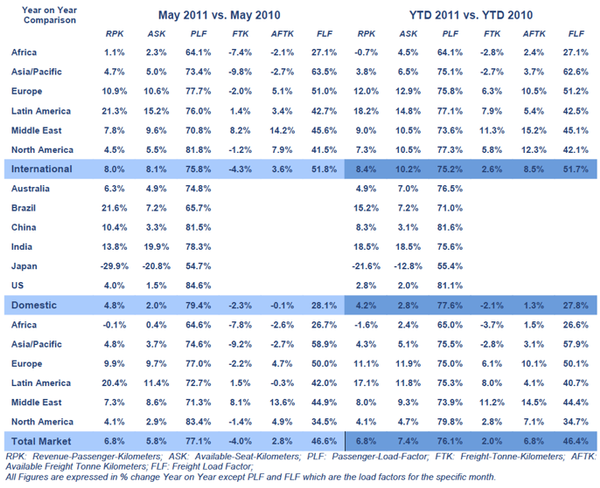 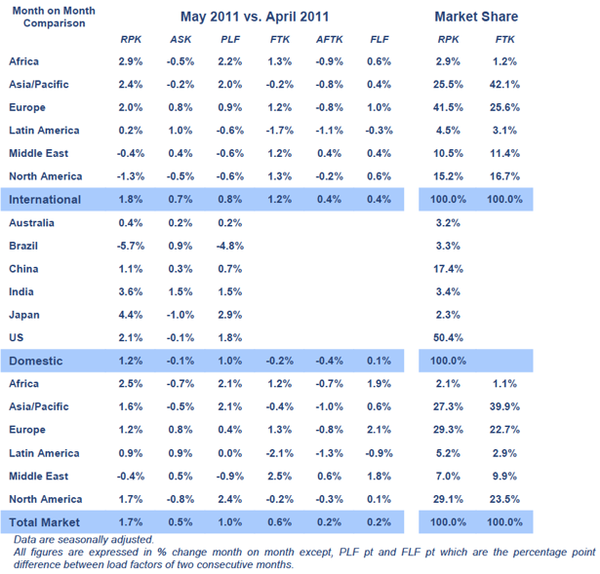