Many airports are recognising that the sort of traffic levels that existed in late 2019 and the first month of 2020 will not be seen again for quite some time, and the measurement is in years rather than months.

Even so, and as reported frequently by CAPA, the intent is there to get new infrastructure through the planning stage and under construction as quickly as possible, using the current limbo period as an opportunity to progress those ends, and to welcome on board new investors.

One example is at London’s Gatwick Airport, the world’s busiest single runway airport.

Gatwick already has its new investor, in the shape of the French conglomerate VINCI, and now it is fast-forwarding a conversion from taxiway/emergency runway to functioning runway, in order to give it two. Or at least, one and a half.

London Gatwick Airport says it is proceeding with plans to convert an emergency runway into a fully functioning second runway, despite the impact of coronavirus on its operations.

CEO Stewart Wingate has said, "We've set ourselves with a challenge of in 2021 going forward with a public consultation and then subsequently going into the planning process with a view to getting the planning permission sometime during the course of 2023".

Gatwick lost out to Heathrow in the race to get government approval for an additional runway. It has said since then that it will still build one anyway, and it did need extra capacity urgently – until recently.

A change of ownership at Gatwick’s operating company overshadowed that plan. The new majority owner, VINCI, had to weigh up the pros and cons, although its track record did suggest it would welcome the challenge.

But for now the airport is pursuing an additional ‘runway lite’ strategy, which would mean that it would bring an existing taxiway back into commission as a partial-use runway to the north of the present runway, although there are some technical issues to deal with.

In mid-2019 Gatwick announced that it was planning to prepare a development consent order (DCO) to bring its standby runway into routine use. The process would include a public consultation process seeking feedback from local authorities, communities, businesses and partners. The airport added work that would be carried out to ensure that environmental impacts were to be "appropriately managed and mitigated".

To call the runway a ‘standby’ one is not strictly accurate. For all the talk during the Airport Commission’s deliberations over an additional runway in southeast England (a third at Heathrow or a second at Gatwick, which was Plan B), in fact there was always a ‘second’ one at Gatwick, even though it operated as a single runway facility.

The main runway has a 'Take-off Run Available' (TORA) of 3,255m when aircraft take off in a westerly direction and 3,159m when takeoffs occur in an easterly direction. Compared with the main runway, the TORA for the northern runway is 2,565m in both directions.

Both runways are 45m wide and they are 200m apart, which is inadequate for them both to be used simultaneously.

Hence, the northern runway has been used as a taxiway during normal operations, which is in line with its original purpose, although it has been widened since it was built.

The northern runway would be used for narrowbody takeoffs only

In Oct-2018 Gatwick said that it was "exploring how to make the best use of its existing runways, including the possibility of bringing the standby runway into routine use".

One option would be for 08L/26R to be used for departing narrowbody aircraft only, whereas the longer 08R/26L would be used for widebody takeoffs and all landings. That would at least increase operational capacity. Widening 08L/26R would also increase the centreline separation slightly.

New technology might also be used to increase capacity on the main runway. The northern runway does not have ILS, which it surely would need if it were to be used in the anticipated manner. Moreover, adjustments would need to be made to existing taxiing procedures.

Numerous conflicting factors influence a decision on a new runway

In the long term, the airport remains interested in constructing a new runway to the south, despite losing out to Heathrow as the official government choice for a new one. That decision has been thrown into considerable doubt as a result of recent judicial rulings against Heathrow on environmental grounds.

Gatwick can do it and needs to do it.

It needs to because it is the busiest single runway airport in the world, although it does vie for that title with Mumbai Airport and Istanbul’s Sabiha Gökçen Airport.  Gatwick certainly handles more aircraft and passengers per runway than does Heathrow, which is “full to capacity”. 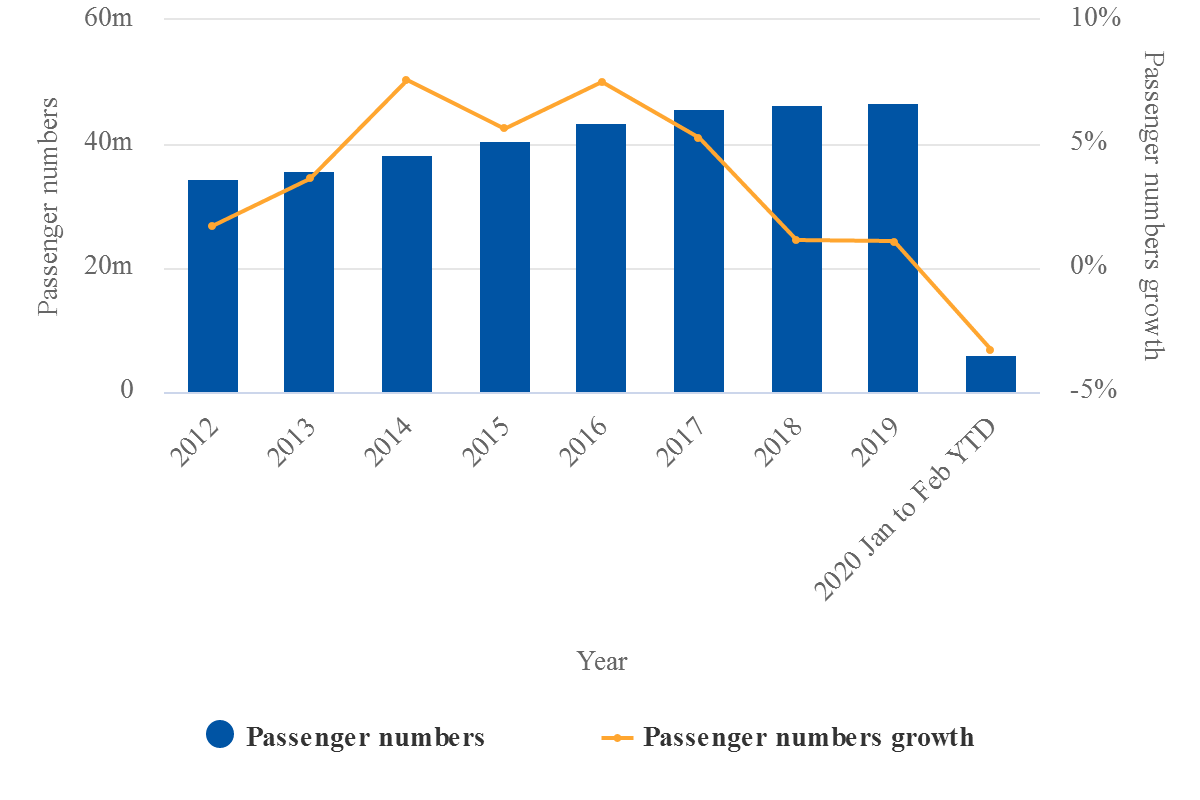 Gatwick can do it because a moratorium on building a second runway, which goes back decades, expired in 2019 and Gatwick’s management remains convinced that it could build one by 2025 – much more cheaply than could Heathrow, and with less environmental impact. That was the thrust of its Airports Commission submission.

On the other hand, some of the support for it may have gone, because earlier investors – sovereign and pension funds – have shipped out, following the ‘defeat’ of Heathrow.

Those investors were replaced by VINCI, the French company that is arguably the world’s leading investor/operator in airports now and has held 50.01% of the equity in the operating company since May-2019. Through one of its funds the original investor GIP remains, but in a diminished role.

VINCI would take on the challenge of a new runway

The investment increased VINCI’s passengers by about a third immediately, so it might be expected that VINCI would tread carefully. But caution does not seem to be an essential part of VINCI’s operating manual; after all, this is the same company that has taken something of a gamble by investing heavily in Belgrade Airport.

So there is good reason to believe that VINCI wants not only to progress the standby runway concept but also to revisit the southern runway that was proposed to the Airports Commission.

VINCI would probably wait until all the outcomes of ‘Brexit’ became apparent in the latter case (the UK has left the EU and the severance terms are currently being ‘negotiated’), as well as an end to this current medical crisis.

However, as it can steal a march on Heathrow by getting the standby runway into full operation quickly (the most recent twist in the Heathrow third runway saga may well have been the last), that eventuality is likely to be realised by 2023, if that is achievable at all.

Noise footprint will not vary by much from the present one

Looking at the standby runway scheme from a technical angle, the noise footprint will be “similar”, despite the extra capacity, Gatwick claims. There will be “minimal disruption as the standby runway plans will be privately financed” (whatever that means). Crucially, no compulsory purchase of residential properties would be required.

In Jul-2019 Gatwick published its final master plan outlining the strategies to accommodate demand sustainably over the next 15 years, following a 12-week public consultation in which it received more than 5000 responses. (That demand over the next 15 months has been heavily influenced by events since then, of course).

Making use of existing runways in line with government policy was supported by 66% of residents, including the plan to bring the existing standby runway into routine use alongside the main runway. Of the respondents, 59% supported the continued safeguarding of land for an additional runway, should one be required in future.

With regard to the current situation, Gatwick CEO Mr Wingate recently said, "We hope operations will start up at the end of May or early June and build during July and August (2020)", but acknowledged that decisions for the resumption of passenger services are subject to UK government approval.

The airport expects passenger traffic to recover to pre-coronavirus outbreak levels within 36 to 48 months. 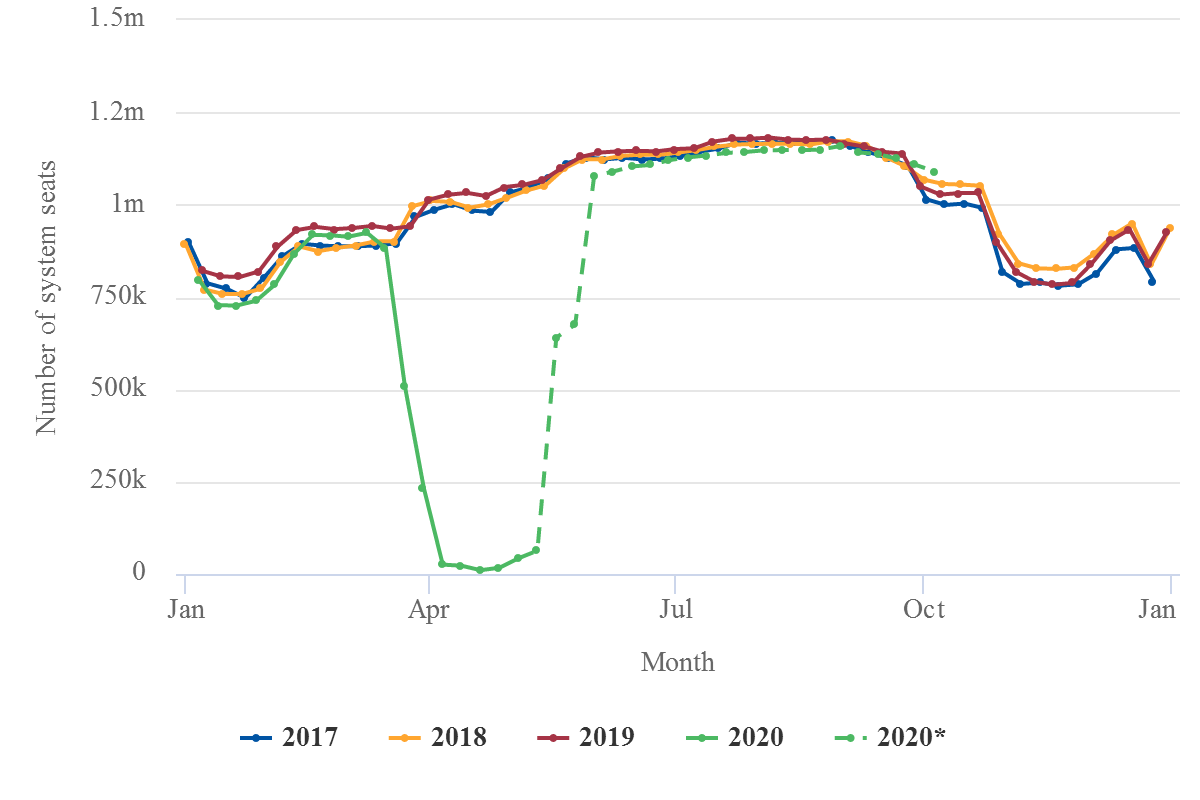