Garuda Indonesia budget subsidiary Citilink is planning to expand at Jakarta Halim and Medan over the next two months as it continues to pursue market share gains, despite challenging conditions. Citilink accounted for approximately 12% of Indonesia’s domestic market in 2015, compared with 3% in 2011, and should be able to capture nearly a 15% share in 2016.

Citilink passenger traffic grew by 24% in 2015 while its full service parent Garuda grew domestic passenger traffic by 10%. Both airlines have been gaining market share over the last two years while overall growth in Indonesia’s once booming domestic market has slowed significantly.

The 2016 outlook is relatively challenging but Citilink, at least for now, plans to maintain a similar growth rate as 2015. The LCC also remains confident that it can stay in the black after turning its first-ever annual profit in 2015.

Citilink has grown rapidly since 2011

Citilink currently operates a fleet of 36 all-economy 180-seat A320s with bases at five Indonesian airports – Bali, Batam, Jakarta Soekarno-Hatta, Jakarta Halim and Surabaya. It only operates domestically, with the exception of international charters.

Citilink has expanded rapidly since it took its first A320 in 2011. Annual passenger traffic has since grown sixfold, from only 1.6 million passengers in 2011 to 9.4 million in 2015. 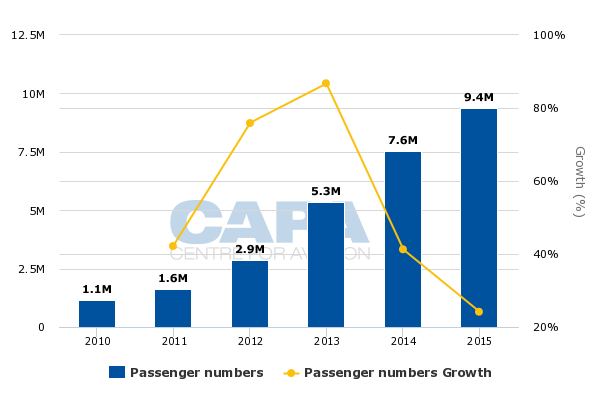 Citilink, which operated a small fleet of 737 Classics prior to accelerating expansion with A320s in 2H2011, accounted for slightly over 2% of Indonesia’s domestic market in 2010 and slightly over 3% in 2011. In 2015 Citilink captured approximately a 12% share (based on CAPA estimates).

Garuda also has continued to grow its domestic passenger traffic rapidly, as it has focused expansion on the domestic market while restructuring its international network.

Garuda has more than doubled its domestic traffic since 2010, reaching 19.4 million passengers in 2015. 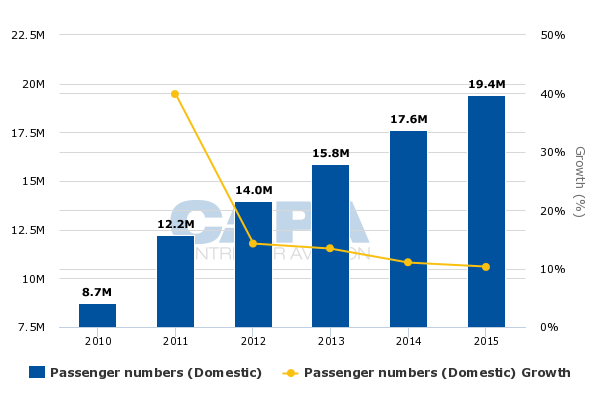 The Garuda Group has benefitted from consolidation in the Indonesian market, including the suspension of Batavia in 2013 and of Merpati, Sky Aviation and Tigerair Mandala in 2014. Combined, these four airlines had accounted for almost 20% of Indonesia’s domestic passenger traffic.

Garuda and Citilink have also been winning back market share from Lion Air, which grew at a phenomenal pace last decade and became Indonesia’s largest domestic airline in 2009. Lion Air passenger traffic continued to grow rapidly in the first part of the current decade but has slowed significantly over the last three years, and even experienced a drop in 2015 – although full service subsidiary Batik Air and low cost regional subsidiary Wings Air still grew rapidly. (Exact figures for Lion Air and its sisters are not available as Lion Group is privately owned).

Indonesia’s largest airport, Jakarta Soekarno-Hatta, reported a 7% drop in domestic traffic through the first 10 months of 2015. Overall the Indonesian domestic market was relatively flat – with growth of at most a couple of percentage points – driven by faster growth at some of the secondary hubs.

Market conditions in Indonesia have been challenging over the last couple of years due to a weaker economy and the rapid deprecation of the Indonesian rupiah, which has impacted consumer spending. Demand at the lower end of the market has also been impacted by a price floor that the Indonesian government began enforcing in early 2015, as part of a knee-jerk response to the 28-Dec-2014 Indonesia AirAsia crash.

See related report: Indonesia’s price floor for airlines is misguided, a bad precedent and will be counterproductive

Citilink’s ability to maintain a rapid growth rate and become profitable in 2015, despite the challenging conditions, is impressive. Market conditions are not expected to improve significantly in 2016 since Indonesia’s economy remains relatively weak.

The government has reduced the price floor by 10%, which should enable airlines (particularly LCCs) to stimulate demand and persuade budget-conscious passengers to take more trips. However, Lion will likely be the largest beneficiary of the lower price floor as it was more impacted by the regulation in 2015 than Citilink was.

Lion’s average fares have historically been lower than Citilink's, a reflection of Lion’s lower cost structure and use of higher density narrowbody aircraft. But Citilink and Lion have the same government imposed minimum fares as they are both categorised by Indonesia’s DGAC under the no frills category. The DGAC has three categories – full service, medium service and no frills based on what services an airline offers – and the categories are used to calculate price floors and ceilings for each route.

As Lion is able to reduce fares Citilink will likely also be pressured to make reductions. While the lower fares could stimulate demand in an otherwise weak demand environment, yields will come under pressure. Capacity increases on several trunk routes could exacerbate the situation, impacting profitability.

Citilink is expecting to grow capacity by approximately 25% to 30% in 2016 as it adds eight A320s for a total of 44 aircraft. Passenger traffic and RPKs should grow at a similar rate, assuming Citilink succeeds at maintaining its load factor at approximately 80%. ASKs were up 26% in 2015 as RPKs increased by 26.5%, resulting in a 0.4ppt improvement in load factor to a record 79.9%. 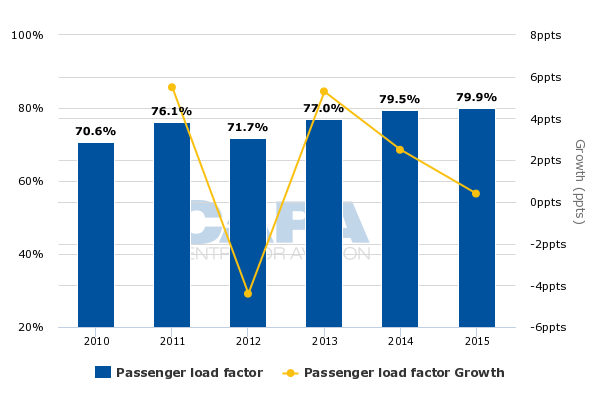 CAPA stated in a Nov-2015 report that Citilink was considering opening two new bases in 2016, at Medan and Makassar. CAPA also stated at the time that Citilink was planning to base only one of the eight additional aircraft for 2016 in Jakarta, due to infrastructure constraints at both Jakarta airports.

Citilink has since been able to secure three additional slot pairs at Jakarta Halim, enabling it to base its first additional aircraft for 2016 at Halim. Citilink CEO, Albert Burhan, told CAPA on the sidelines of the Singapore Airshow that an A320 being delivered at the end of Feb-2016 will be based at Halim and be used to add one daily frequency on the Halim to Bali, Medan and Solo routes.

Citilink and Batik Air are the only two airlines currently operating scheduled flights at Halim. The airport, which is closer to central Jakarta than Soekarno-Hatta, reopened to commercial traffic in early 2014. It is also used by charter airlines, small air taxi operators, the Indonesian air force and business aviation. The military owns and controls Halim but Lion Group is in the process of taking over the airport’s passenger terminal, which Citilink is still able to use, at least for now.

Significant growth at Halim is unlikely, given the constraints placed by the military. Even the ability to base one more aircraft is somewhat of a pleasant surprise. The additional aircraft that will be based at Halim will also be used to operate non-Halim routes as Citilink is limited to adding three Halim departures – sufficient to use Jakarta-based crews but not sufficient to utilise the aircraft fully.

Citilink to open a new crew base at Medan

Mr Burhan told CAPA that Citilink has decided to allocate its second additional A320 for 2016 to Medan. This aircraft is slated to be delivered in Apr-2016, enabling Citilink to open a base at Medan’s Kuala Namu International Airport.

Citilink currently serves Medan from Bandung, Batam, Jakarta Halim and Jakarta Soekarno-Hatta. On 3-Mar-2016 Citilink is launching two new routes from Medan, to Banda Aceh and Pekanbaru. Both are short routes within the island of Sumatra and will initially be served with one daily flight. Also on 3-Mar-2016 Citilink is launching one daily flight between Pekanbaru and Bandung, a city approximately 120km from Jakarta on the main island of Java.

Mr Burhan said that the Medan-based aircraft will be used to add frequencies on existing routes. As Citilink has not previously had any aircraft based at Medan, it is sensible to use the first aircraft for the base to operate new morning departures on competitive trunk routes.

Citilink undecided on bases for six of its 2016 deliveries

Mr Burhan said that Citilink has not yet decided on where to base the other six additional A320s for 2016. The third A320 is also slated to be delivered in 2Q2016 and the fourth aircraft is slated for mid-2016. The last five deliveries are currently slated for 2H2016, although attempting to defer some of these would be a sensible move if market conditions do not quickly improve.

As CAPA has previously highlighted, Citilink is considering converting some of its A320neo orders into A321neos and A321neoLRs. The A321neos would be used to upgauge flights on trunk routes from Jakarta, enabling Citilink to maximise the use of slots at the Indonesian capital, while the (near-4,000nm range) A321neoLRs would be used to launch new medium haul international routes.

Charters have enabled Citilink to be profitable during off-peak periods

Citilink is currently operating several international routes on a seasonal charter basis. In Feb-2016, which is an off-peak month for domestic travel, Citilink operated charters to nine cities in mainland China. Most of these flights were operated from Bali, where Citilink bases four A320s, but the LCC also operated a limited number of flights from Manado to China.

In early 2015 Citilink established a charter programme that included several Chinese destinations, and one-stop flights to Saudi Arabia. Citilink is not planning to operate Saudi Arabia charters in 2016.

Citilink was profitable for the first time in 2H2014 and has since been consistently in the black, leading to its first annual profit in 2015. The LCC was able to turn a small profit in 1H2015, boosted by the charter operation, and should be able to remain profitable in 1H2016, despite the challenging market conditions. Citilink is confident that it will again be profitable for the full year in 2016.

Citilink may need to slow expansion

However Citilink faces challenges over the short to medium term, including potential overcapacity in the domestic market. Outbound demand in Indonesia’s international market is relatively weak, making it a difficult time to launch scheduled international services.

A slowdown in fleet and capacity growth would be sensible. Citilink has captured a significant enough share of the market that it does not need to continue strategic expansion, if it comes at the expense of profitability.

Citilink has emerged as a viable LCC subsidiary under the wings of Garuda and is positioned to benefit when market conditions improve.