Fraport’s financial reports for the last three months and six months reveal that revenue and EBITDA growth has come in the main from its foreign investments and management contracts. Growth was recorded across all fields of activity with the exception of real estate (stable).

The airports that are included in Fraport's global portfolio of subsidiaries and other investments number 26 airports on three continents.

Results data are notable for a 44% revenue increase in International Activities and Services and a 16.3% increase in EBITDA in that segment – both well ahead of other segments, with the exception of the EBITDA increase in Ground Handling.

It would not be surprising to see Fraport’s financial results being driven continuously by its investments in other airports while the anchor airport, Frankfurt International, remains capacity constrained and requires ever-increasing capital expenditure.

This report looks at those airports, some of which are part of subsidiaries, the investments Fraport is making at them, and at whether they are a good fit with the main company.

In almost every case they are.

Revenue increase of 44% in International Activities and Services

The six-month details are represented in the table below.

Growth was recorded across all fields of activity with the exception of real estate (stable).

The EBITDA increase of 10.9% produced a margin of 29%, which is on the low side for an enterprise of this size and scope. On the other hand, Fraport does operate under a wide variety of jurisdictions in countries across the world and through numerous country-based subsidiaries, in which the control exercised over the charges it can apply will vary considerably.

The table is notable for a 44% revenue increase in International Activities and Services and a 16.3% increase in EBITDA in that segment – both well ahead of other segments, with the exception of the EBITDA increase in Ground Handling.

A global portfolio on three continents

The airports that are included in Fraport's global portfolio of subsidiaries and other investments number 26 airports on three continents.

They include the long-standing Lima Airport in Peru; two in Brazil (Fortaleza and Porto Alegre); Ljubljana in Slovenia; two coastal airports in Bulgaria (again, long-standing investments); St Petersburg in Russia; Antalya in Turkey; Delhi in India; Xi’an in China (one of the few ‘western’ investments in Chinese airports that remains); 14 regional airports in Greece, and a portfolio of retail outlets at five airports in the U.S. (Fraport USA, previously Airmall).

Fraport is a wily investor and has infrequently been tempted into investments in Southeast Asia, where business and cultural standards and procedures in some countries can be at odds with European ones, or in Africa, despite numerous “opportunities” in both regions.

That may well be a result of an abortive investment made in 2004 in PIATCO, a consortium contracted to build and operate a third terminal at Manila’s Ninoy Aquino International Airport. Fraport, through a subsidiary, had 30% of the consortium, but a new government terminated the contract immediately it took power, with the terminal almost ready to open. A final compensation payment was only made in 2016.

Perhaps for those reasons, Fraport appears wary of eastern European airports where there have also been instances of governments suddenly changing their mind on infrastructure projects and privatisations but it has made some selective investments while not exactly committing to the region.

Going through these airports and groups individually: since 01-Feb-2001 Lima Airport has operated on a 30-year concession by Lima Airport Partners, in which Fraport is an 80.1% shareholder. According to the CAPA Airport Construction Database, infrastructure investment there runs to USD1.2 billion through to 2030. It includes a new passenger terminal, a second runway and an ‘airport city’.

As Fraport Brasil, the two Brazilian airports are fairly recent investments and part of the third main concession tranche there (2017). They went to Fraport solely under a 30-year concession (Fortaleza) and 25-years (Porto Alegre); it was not part of a consortium.

At the Pinto Martins airport at Fortaleza Fraport will invest BRL1 billion (USD261.2 million) throughout Phases 1B and 1C of its expansion project, and at Porto Alegre’s Salgado Filho airport a new terminal is about to be completed as part of investment running to USD455 million.

The sale of 75.5% of the equity in Ljubljana’s Jože Pučnik Airport to Fraport Slovenia (100% owned by Fraport) from a variety of small shareholders was completed in Sep-2014. Work has just begun on the construction of a new 10,000sqm terminal building, scheduled to open in 2021.

Traffic growth at the Bulgarian coastal airports has been very positive

The Varna and Burgas airports on Bulgaria’s Black Sea coast were early investments for Fraport.

In Jun-2006, in return for investments exceeding EUR500 million, the Bulgarian Government awarded Fraport AG Frankfurt Airport Services Worldwide, in a partnership with the Varna-based company BM Star as Fraport Twin Star Airport Management (Fraport 60%; BM Star 40%), a 35-year concession on both Varna and Burgas airports. They are of the variety of small airport investments that are often sold on by large multinational organisations but Fraport has persisted with them.  Both airports have grown passenger numbers dramatically during the past three years but that growth has stopped in 2019 to date, and numbers are well down.

Russia’s St Petersburg Pulkovo Airport has been operated by Northern Capital Gateway since Apr-2010 and for some time was the only airport in Russia to be developed on the basis of a Public-Private Partnership.

Fraport’s shareholding has reduced from 35.5% to 25% in line with other equity changes, but Fraport retains its role as Pulkovo Airport's operator. Investment of almost USD1 billion is envisaged through to 2025 and a new terminal may be built for LCCs if there is domestic and/or international demand for it.

Turkey’s Antalya Airport was originally secured by Fraport in a consortium with ICT Ictas Holding in Apr-2007 for the operation of all three airport terminals in Antalya, with a total concession until the year 2024.

Subsequently (May-2018), TAV Airports obtained approval from the Turkish Competition Authority for the acquisition of a 49% stake in Antalya Airport from IC Ictas. Fraport retains 51%.

The State is keen to build a new airport (Antalya is the country’s third busiest airport, well ahead of Ankara’s airport) but has made little progress on it.

In India, and unusually for Fraport, Delhi’s Indira Gandhi Airport (DIGA) is a minority investment, held alongside the majority shareholders Airports Authority of India and GMR Airports (GMR Infrastructure).

Fraport has previously expressed concern about its limited influence over the airport’s operation and indicated that it would not take another such minority stake in an Indian airport. Nevertheless, what is India’s busiest airport (with almost 70 million ppa) and one that has experienced strong growth in the last eight years (although not this year) is still a considerable asset. 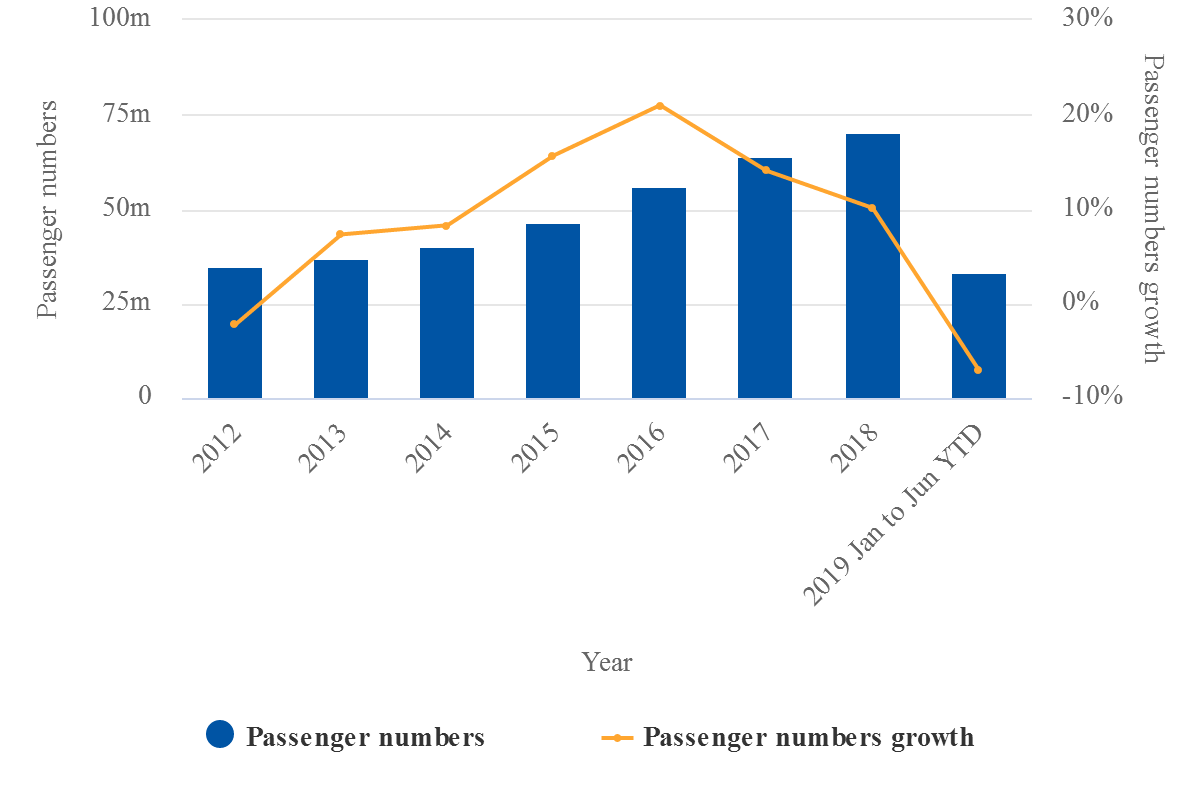 Only this month (Aug-2019) DIGA announced that works for the phase 3A Delhi Airport expansion project had started.

Phase 3A will require an estimated investment of INR98 billion (USD1.4 billion) and is expected to be completed by Jun-2022. It includes a fourth runway, making Delhi the only Indian airport to have four.

Xi'an Xianyang Airport was the first in China that is not market-listed to acquire a foreign shareholder and operator (24.5 %).

Fraport has persevered successfully with this investment over the years while other, foreign operator/investor airports – such as Copenhagen Airports and Aéroports de Paris (now Groupe ADP) – and investor/operators such as Vinci have pulled out of China.

A third south pier at terminal three began operations on 15-Aug-2019, adding capacity of 10 million passengers per annum, and infrastructure investment of more than USD7 billion is scheduled through to 2030. Passenger traffic has increased from 23.4 million to 44.6 million (2018) since 2012.

Fraport Greece has performed better than some people expected

Finally, the most intriguing investment is in the 14 regional Greek airports that the subsidiary Fraport Greece (73.4% Fraport AG and 26.6% Copelouzos Group) took control of in Apr-2017 on a collective 40-year concession.

Anchored on one main airport, Thessaloniki, and with numerous island airports each handling just a few hundred thousand passengers a year, it was something of a gamble, and there were early teething problems as the State tried to retain control of infrastructure development.

Nevertheless, Fraport Greece has been able to bring value to the airports.

Expansion and modernisation work at the airports in Chania, Zakynthos and Kavala was completed in 1Q2019. At the beginning of Apr-2019, regulated airport charges at these airports were increased in accordance with the concession agreement. By the end of FY2019 Aktion, Kefalonia, Mytilene, Rhodes, Samos, and Skiathos airports will also be completed successively. Regulated airport charges will also be adjusted at these airports upon completion of works.

An experienced operator and careful with its investments

Overall, Fraport’s investment strategy seems to be working well. It is one of the most experienced operators and selects its investments carefully while frequently being in demand.

In fact, before IFM Investors took a 35% stake in Manchester Airports Group to make a joint bid for London Stansted Airport, there were widespread calls in Manchester for the Group to be privatised and managed by Fraport.

It would not be surprising to see Fraport’s financial results being driven continuously by these investments while the anchor airport, Frankfurt International, remains capacity constrained and requires ever-increasing capital expenditure.