Germany’s Fraport AG (-1.9%) CEO Dr Stefan Schulte stated the airport operator is in talks to acquire a 25% stake in China’s Hunan Airport Group. A final decision on the acquisition is to be made in the next two years. It would be the company’s second airport stake after a similar strategy in Xi’an.

Fraport is also plans to make a bid to manage Puerto Rico’s San Juan Luis Muñoz Marín International Airport. A tender for the airport is expected to be launched at the end of this year. Dr Schulte added the company is also interested in projects in Brazil, with the Brazilian Government likely to decide on the sale of its airports in 1Q2011. Fraport’s stakes in non-German airports account for approximately 20% of its revenue and 30% of EBITDA.

France's Civil Aviation Authority stated French air traffic would be disrupted from 22-Sep-2010 to 24-Sep-2010 due to a planned general strike over pension reform. The Authority requested airlines to reduce flights to/from Paris Orly Airport by 50% and those at Paris-Charles de Gaulle by 40%. Flights to/from other French airports will also be reduced by 40%. A number of European services have been cancelled as a result of the strike.

Tens of thousands of passengers are expected to be impacted by the strike action. Ryanair was forced to cancel more than 200 flights and strongly criticised the ATC suppliers for strike action over summer 2010, with approximately 20 British Airways services being impacted. Meanwhile, shares for AdP fell by -1.5%. 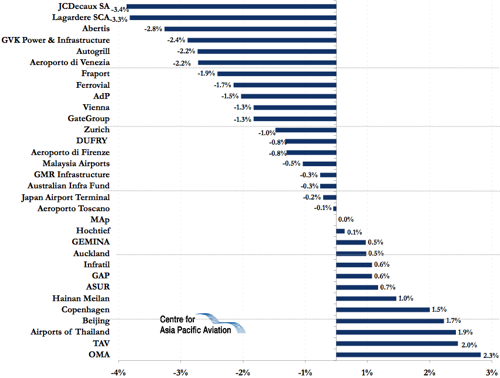