Finnair reported a net loss of EUR56.8 million in the first half, a 14.7% fall, as sharp cost increases neutralised revenue gains in the period. The Finnish flag carrier stated its performance on its key Europe-Asia routes have been strong, but ongoing uncertainty stemming from Europe’s macroeconomic concerns and events in Japan, the Middle East and North Africa weighed heavily on the result.

CEO Mika Vehviläinen said “the result for the second half of the year is expected to return to profit, in accordance with earlier profit guidance. The company expects that it will be able to achieve during this year some of the planned cost-savings it has announced today. At the same time, the company expects that it will not be able to achieve a positive result in2011, due to the heavy losses of first half of the year. Finnair continues to expect that turnover will grow by more than 10% in the full year 2011."

Despite narrowing the net loss in 2Q, the airline remains in the red for the first half, recording a net loss of EUR56.8 million, down from 1HY2010’s net loss of EUR49.5 million.

“Our profitability has not matched expectations, even though our costs, excluding fuel, have developed according to plan,” Mr Vehviläinen said. “Our industry has changed radically during the last couple of years: increased competition, new service innovations and more efficient business models have entered the market. Temporary disruptions caused by events in Japan and the Middle East as well as a substantial increase in the oil price have naturally contributed to the weakening of financial performance. Especially the Japanese natural disaster had a significant impact on our result in the second quarter.”

Finnair increased revenue in the period by EUR65.9 million, or 13.9%, in the second quarter. Particularly strong was revenue growth in Asian routes, which increased 28% in the quarter. Business travel and business class demand developed positively, the airline said, but economic uncertainty in Europe, weakness of demand in travel to Japan, and unrest in the Middle East and North Africa weighed on the development of unit revenue. 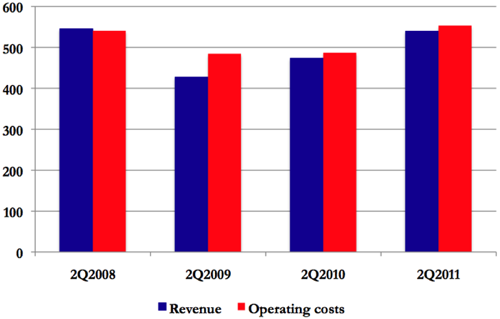 The airline noted that the “strong growth in demand evident in the first quarter leveled off in the second quarter due to the continued high price of oil, the uncertain macroeconomic situation, and events in Japan, the Middle East and North Africa”. Finnair offset this weakness by increasing market share on routes between Europe and Asia, and now claims to be the third-largest carrier, as measured in RPKs, in the markets served by the airline. The airline launched Singapore service in May-2011, joining its growing Asian network, which also includes Bangkok, Delhi, Nagoya, Osaka, Beijing, Shanghai, Singapore, Seoul and Tokyo.

Finnair noted that travel demand from Europe to Japan continued to be weaker in the second quarter compared to the previous year, which has a “significant impact” on the 2Q result. Business travel on Japanese routes remained strong and the airline claims that 70% of passengers on its Japan services are Japanese.

Finnair’s 13.9% increase in top line revenue was slower than the 21.5% increase in passenger numbers in the quarter, to 2.04 million, reflecting ongoing yield pressures in northern Europe. ASKs increased 21% in the period, outpacing the 18.0% increased in RPKs, which saw a 1.8ppt fall in load factors to 71.6%, which further hurt pricing. Long-haul business class demand (RPKs) increased 27% in 2Q, with particular strength on Asian routes. The charter unit, however, remained very weak, falling 20% year-on-year to 156,200 passengers. This segment was heavily affected by plummeting demand on services to the Mediterranean region, including North Africa. On short-haul and domestic markets, Finnair said continued overcapacity hurt yields.

Unit revenue (RASK) fell 4.3% to EUR 6.0 cents and yields were flat at EUR 7.4 cents. CASK fell 7.6% to EUR 6.4 cents in the period, although the cost of service provision continues to outweigh the return. Excluding fuel, CASK fell 11.6% to EUR 4.6 cents, demonstrating the hard work the airline has been doing on the cost side in the face of increasing LCC competition, overcapacity in short-haul markets and weak unit revenue growth.

Total operating expenses increased 12.4% in the period, to EUR557.2 million. Finnair attributed its losses result to due to price of fuel and the disruptions, including events in Japan, the Middle East and Africa, in the early part of the year. Fuel costs increased 27.7% in 2Q to EUR131.7 million, accounting for 23.6%.

Fresh cost-cutting measures on the way

Despite the sharp fall in ex-fuel unit costs, Finnair will embark on a more aggressive and more ambitious cost-cutting programme aimed at permanently reducing the cost base by EUR140 million by 2014. "We must improve our operational efficiency ... We will begin the planning of these savings and initiate discussions with personnel group representatives," Mr Vehviläinen said.

“In the long term, our cost structure compared with many of our competitors is simply unsustainable,” the CEO stated, adding that for the airline to become sustainable it must address its operational efficiency, which lags that of the more nimble airlines in the region, most significantly Norwegian Air Shuttle, Ryanair and airBaltic. Describing the situation, particularly on Europe feeder routes, as “challenging”, Mr Vehviläinen said that such ambitious productivity improvements “will require new thinking, a significant change in ways of working and operational structures as well as dissection of all cost items”. He acknowledged the airline’s “ways of working” are based on the legacy model of a bygone era and have been rendered completely ineffective in light of current competitive dynamics.

Cost cuts will come from areas including the catering business and various structural solutions in flight operations, particularly in Europe. The airline will immediately commence discussions with its staff on cost cuts, with reduction to affect all personnel groups. The airline employs 7500 people.

Sustained profitability will come not only through cost reduction efforts, but also through higher revenues. The measures are aimed at providing a buffer to safeguard profitability in the event of a sudden cost spike or revenue shock, such as the events in early 2011. Asia has a key part to play in this strategy, with Finnair aiming to double revenue from Asia by 2020, an ambitious target that will require the expansion of routes in the fast-growing region. New services to Chongqing will be launched in 2012, a booming city in central China, which is investing strongly in industry, international trade and tourism. Reflecting the airline’s focus on revenue growth, Finnair will be the only airline operating non-stop service between Europe and Chongqing. Finnair’s cargo unit will also play a part in the strategy, with “new growth opportunities” to be exploited “in line with [the] ambitious targets”.

Another key plank in the strategy is Finnair’s plans to turnaround its short-haul business, much of which is responsible to feeder traffic to and from its Helsinki hub. In recent year, lower-cost competitors including Blue1, Ryanair, airBaltic, easyJet and Norwegian have eroded the profitability of this segment. Finnair’s strategy, to become a major transit point between Europe and Asia, is dependent upon strong, profitable short-haul feed to and from its Helsinki base, as O&D traffic between Helsinki and Asia represents a small proportion of total passengers.

Finnair’s co-operation with Flybe and the acquisition of Finnish Commuter Airlines reflect the airline’s partnership strategy, it claims, and are examples of the company’s intention to cooperate with the industry’s best to create added value for customers and shareholders. According to Finnair, Flybe Nordic, which the new short-haul carrier will be namef, “will create a strong, cost-efficient carrier, complementing Finnair’s operations and providing point-to-point connections and an effective feeder traffic platform for Finnair’s international flights.” The airline, which has received approval from competition authorities, will be 40% owned by Finnair with the balance held by Flybe. The UK regional carrier will leverage its know-how and take over the day-to-day operation and management of FCA in August 2011.

Finnair sees red for the full-year

Despite the airline’s troubles, the business is cash-flow positive, at least in the second quarter, with net cash flow from operating activities increasing to EUR90.1 million from EUR19.5 million a year earlier. In line with the greater cash flows, interest-bearing debt fell to EUR723.3 million from EUR860.3 million. Finnair stated liquidity levels remained “good”.

Finnair expects to be profitable in the second-half, but the level of profitability will not be enough to offset losses recorded in the first half, leaving the airline in the red for the full-year. Total revenue is expected to grow 10% for the full-year, following the 12.4% 1HY increase. Short-haul competitive pressure is likely to ease on Finnair in the short-term, with ongoing ownership conflict at airBaltic, easyJet’s withdrawal from the Finnish market and SAS’ re-organisation of its Finnish subsidiary, Blue1. Norwegian Air Shuttle, however, which has emerged as one of Europe’s fastest-growing airlines, launched its Helsinki base in 2Q and the LCC’s capacity to grow new markets must not be underestimated. It is this ongoing competitive pressure that is forcing change in the Finnair. Finnair has learnt the lessons of its larger rival to the south, Star Alliance member SAS, and is seeking to adapt faster than its larger rival to the south, SAS, which has for many years suffered due to various factors, but most significantly SAS’ troubles have been caused by its slow pace of passing through structural change. Finnair has carved out a clever niche, leveraging Helsinki’s location to link two of the world’s most important economic regions, Europe and Asia. But reaching and sustaining profitability will depend on the airline’s ability to overhaul its operating structure and fully implement its ambitious cost reduction programme.