Ferrovial shares up as BAA sees “encouraging signs of growth”

Shares in Ferrovial, parent company of BAA, gained 2.0% yesterday. BAA remarked that there are “encouraging signs of growth”, although the “market remains a difficult one”.

BAA reports a "virtual stabilisation" in passenger numbers at London Heathrow Airport in Jan-2010 (-0.5% year-on-year), while passenger traffic at London Stansted was weaker (-5.6% year-on-year). Both airports experienced double-digit growth in cargo volumes for the month, off a weaker base. Details of BAA’s traffic report for Jan-2010 include:

Meanwhile, the UK’s Competition Commission (CC) has sought leave to appeal to the Court of Appeal against the Competition Appeal Tribunal’s (CAT) judgment, in Dec-2009, which allowed a challenge to the CC’s report on BAA airports. In the report, BAA Airport Markets Investigation, the CC called for BAA to divest both Gatwick and Stansted airports and also either Edinburgh or Glasgow airport. The appeal is on the grounds that the CAT was wrong to conclude that there was a connection between Professor Moizer and Manchester Airports Group giving rise to "apparent bias".

Meanwhile, shares in Denmark’s Copenhagen Airport led the way down yesterday (-1.3%), despite a positive traffic report for Jan-2010, on continued investor concern over SAS. Total passenger traffic at the airport increased by 5.7% year-on-year, led a 22.1% improvement in domestic passenger numbers. The full traffic report is available in today’s edition of Airport Business Daily.

Full traffic reports of the featured airports are available in today’s edition of Airport Business Daily - which contains over 50 strategic news updates from around the world, also including these financial and traffic highlights today: 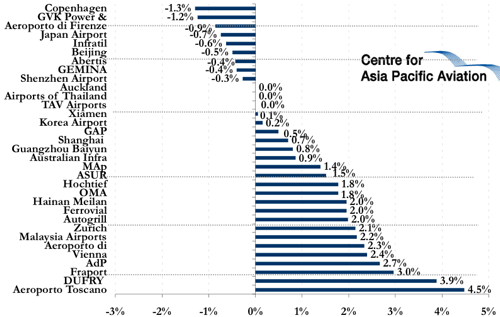