An analysis of the 1Q2012 results of Europe’s Nordic region’s three largest airlines is showing that Norwegian Air Shuttle realised the highest increase in passenger numbers and revenue compared to the year-ago quarter, but Finnair made impressive progress in improving its bottom line. SAS Group remains the region’s largest carrier but growth is sluggish and losses are mounting, which puts its survival chances further in question. SAS Group is owned by the States of Denmark, Norway and Sweden and has posted full-year net losses since 2008 despite a series of restructuring and cost reduction exercises.

SAS Group’s market share in these countries is progressively under pressure of LCCs, mainly Norwegian and Ryanair, and fresh headwinds include the Jan-2012 bankruptcy of Spanair, in which it held a 10.9%, and the loss of essential regional feed owing the demise of three Nordic regional airlines: Cimber Sterling, Skyways and City Airline. It is thus not surprising that one of SAS Group’s shareholders recurrently reevaluates the need of holding on to their stake in the carrier.

Norwegian, SAS and Finnair’s outlook and confidence in the longer term future are contrasting, and were highlighted during the presentation of the carriers’ 1Q2012 results with SAS Group president and CEO Rickard Gustafson warning that “the combination of the uncertainty regarding economic trends, high jet-fuel prices and intense pressure from competitors means that SAS will not present a profitability forecast for the full-year 2012”. Finnair CEO Mika Vehviläinen confirmed that the carrier will continue with the implementation of “the necessary and inevitable structural reform” that was initiated in 2011. Finnair’s structural reform includes the divestiture of all non-core activities, the slimming down of its European flights and growing its Asian traffic. The carrier had planned to increase capacity by 5% this year, mainly on routes to Asia but has now toned down its ASK forecast.

Conversely, Norwegian is moving ahead full steam with plans to boost ASKs by 15% in 2012 on short- and medium-haul routes and on 24-May-2012 announced it upped its order for Boeing 787s with two additional aircraft, bringing its total to eight. In Jan-2012, the LCC placed a substantial order with Boeing and Airbus for 372 narrowbody aircraft, of which 222 are firm orders. It is taking delivery of 13 new 737s this year.

Norwegian’s 2012 guidance for a 15% increase in ASKs is three times the capacity increase planned by its two main Nordic competitors, SAS Group and Finnair, which have long-haul routes in their network that represent more ASKs. (Norwegian's long-haul services will only come in at the end of 2012, and even then will initially be minor.)

The moderate revenue hike was achieved on a 5.3% increase in passenger numbers and a 2% increase in ASKs. Unit revenue (RASK) was up 1.7% driven by an improving seat load factor (up 2% to 68.3%) and slightly weaker yield pressure as airlines are adjusting fares for higher fuel prices. Passenger yield at Scandinavian Airlines slipped 2.3% year-over-year after the carrier's passenger yield fell 4% year-on-year in 4Q2011. All European network airlines reported favourable traffic growth and relatively modest capacity increases in 1Q2012, which led to almost all network airlines reporting improved load factors.

The increase in CASK in 1Q2012 heightens the need for SAS to fully implement the 4Excellence strategy, which it launched at the end of 2011. 4Excellence is a follow-up on the former restructuring programme Core SAS, and aims to produce improvements in four core areas by 2015: commercial sales, operational and people. One of the strategic targets of SAS’ 4Excellence strategy is to lower the unit cost by 3%-5% per year.

Finnair’s key operating and financial indicators improved in 1Q2012 on a year-over-year comparison, reflecting a more efficient capacity utilisation combined with good demand, and a solid overall cost reduction excluding fuel. RPKs rose 9.1% on a much lower 3.9% increase in ASKs, consequently improving seat factor by 3.6 points to 76.2%. Revenue grew by 10.9% in 1Q2012 on a 10.1% rise in passenger numbers to 1.1 million. Like most other network carriers in Europe, Finnair reported a higher passenger yield on the year-ago period (2.1%), partly owing to fuel surcharges, and RASK increased 8.7% to EUR6.04 cents while CASK increased 2% to EUR6.51 cents. Finnair drove CASK excluding fuel down by 4.7% to EUR4.48 cents. Finnair's year-on-year comparison is slightly disparate largely due to the effects of the Japanese tsunami of Mar-2011.

Despite the good growth of the business, Finnair’s operating result and net result were still negative and “this means that we must achieve significant improvements in profitability,” Mr Vehviläinen stressed. Finnair is aiming to return to profitability through a strategy focused on Asian traffic, leadership in the Nordic region and partnerships. As part of the execution of this strategy, the carrier in 1Q2012 continued the implementation of what Mr Vehviläinen calls “the necessary and inevitable structural reform” which includes cost savings of EUR140 million by 2014. The programme is focused particularly on improving the profitability of short-haul flights.

Finnair reduced its short-haul fleet size in 1Q2012 by five regional jets. It signed an agreement to lease four Embraer E170 aircraft to Estonian Air and has leased one E170 aircraft to Honeywell. The carrier announced plans to give up four A320 series aircraft as their leasing agreements expire in spring and autumn 2012. In May-2012 Finnair concluded a deal with Flybe to transfer 12 Embraer aircraft and one third of its European network to Flybe Nordic, the Flybe-Finnair JV.

Finnair's divestiture of non-core units is not going smoothly

As part of the structural reform and cost savings programme and Finnair’s partnership strategy, Finnair and LSG Sky Chefs signed a MoU on 12-Mar-2012 for LSG Sky Chefs to acquire Finnair’s catering operations. But the deal fell through at the end of May-2012 because the Lufthansa board decided not to approve LSG Sky Chef's acquisition plans due to an investment freeze at Lufthansa.

Finnair in Apr-2012 announced it would transfer the engine and equipment maintenance operations to SR Technics of Switzerland. But unions are opposing the change of ownership and on 05-Jun-2012 employees from Finnair Technical Services commenced industrial action. The employee unions have said the walkout will last for one week.

Finnair is betting on growing traffic between Europe and Asia, as well as improved short-haul flights, to return to profitability but the carrier has been forced to trim down planned capacity hikes for this summer, although the number of flights to/from Asia during summer 2012 will be higher than last year. The carrier has said that the adjustments are due to delays of scheduled heavy maintenance work on some widebody aircraft as well as a shortage of overflight rights during the summer season. 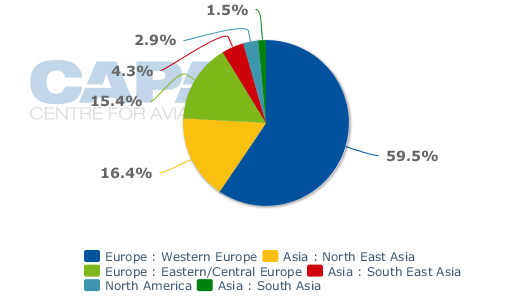 Norwegian Air Shuttle reported double-digit revenue and passenger growth in 1Q2012 compared to the year-ago period. Passenger numbers rose 19% to 3.65 million and passenger traffic increased 22% on a 17% increase in ASKs, which resulted in an improved load factor. The load factor was 77% in 1Q2012, up 3 ppts compared to the same period last year. At the end of the first quarter, the LCC’s total fleet including aircraft on maintenance and excluding wet lease comprised 65 aircraft.

Total revenue in the first three months was NOK 2.4 billion (EUR315 million), an increase of 25% on the year-ago period. Nearly 87%, or NOK2 billion (EUR262 million), of Norwegian's revenues were ticket related and the remaining NOK298 million (EUR39 million), or 13%, was attributed to ancillary revenues. The ticket revenue per unit produced in 1Q2012 was NOK0.38 (EUR0.5 cents), up 6% compared to NOK0.36 (EUR0.5 cents) for the same period last year, reflecting improved load factor and higher yield despite increased sector length.

Operating expenses excluding leasing and depreciation increasing at a higher rate than the revenue increase, by 23% to NOK2.61 billion (EUR341 million) during 1Q2012. The sharp rise in expenditure is due mainly to the increased capacity combined with an increased market price for fuel and losses on forward contracts.  The carrier's unit cost excluding fuel was NOK0.40 (EUR5.3 cents) in 1Q2012 compared to NOK0.39 (EUR5.1 cents) in 1Q2011. The underlying cost excluding fuel and term contracts was NOK0.36 (EUR4.7 cents), which is a reduction of 4% since last year. A larger share of 737-800 aircraft and increased sector length contributed to the reduced underlying unit cost.

Norwegian reduced net and operating losses in 1Q2012 compared to the year-ago-period. Although the Jan-Mar quarter is typically the weakest quarter for European airlines and soaring fuel prices affected 1Q2012 results, Norwegian’s negative margin of 24.3% and net profit margin of 12.1% are distressing. The fast-growing LCC reported a positive EBIT margin of 3.8% and a positive net profit margin of 1.2% for fiscal year 2011.

With a further 13 new 737-800s joining its fleet and assuming a fuel price of USD850 per ton and USD/NOK exchange rate of 6.00 for the full-year 2012 (excluding hedged volumes), Norwegian is targeting a CASK in the area of NOK0.43–0.44 (EUR5.7-5.8 cents) for 2012. The carrier believes it is currently in the CASK “Survival Belt” – a prerequisite for self-sustainability – and it is aiming to join Ryanair and easyJet in the CASK “comfort zone” leaving its full service Nordic peers close to CASK “danger zone”. 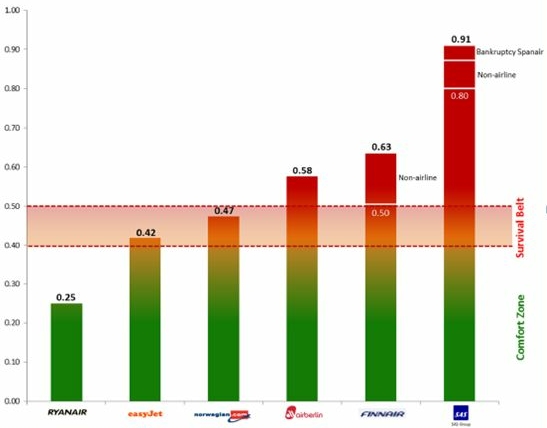 The situation is far from comfortable for SAS and Finnair with Norwegian planning to launch long-haul flights that will eat into their most – or only – profitable part of their business as well as an even more aggressive short-haul expansion backed by a firm order for 222 new narrowbody aircraft, although some will be used to open new bases outside of Scandinavian Europe. 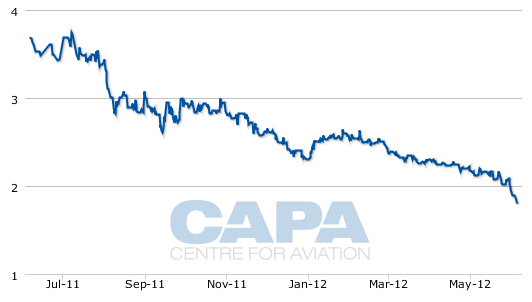 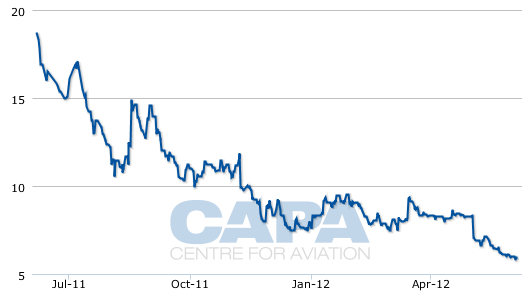 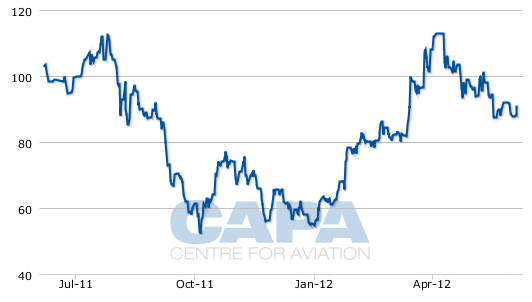