In Jan-2015 Airports Council International Europe (ACI Europe) released a new study on the Economic Impact of European airports. It is billed as the first economic impact study to consider the direct, indirect, induced and catalytic economic impacts of airports across Europe. The study is published as the European Commission conducts a review of aviation policy and prepares a new Aviation Package.

The objective of the study was to demonstrate that airports and their associated aviation partners are not just providing a service to other industries and the travelling public but that they are in fact a key driver and facilitator of economic growth and prosperity in today’s globalised world. The study and ACI document are considered within the context of a real life impassioned debate taking place in the UK right now concerning the relative value of regional airports, and of air connectivity, to trade.

This is Part 1 of a two part summary. Note: This is a review of the Executive Summary and also some elements of the synopsis developed by ACI Europe and entitled The Impact of an Airport.

Airports have a particular ability to generate wider economic benefits

In brief, the study set out independently to quantify and document the economic contribution of the airport industry. It identifies airports as natural job-intensive locations which have a direct impact on the economy, but also looked at the significant indirect, induced and catalytic impacts of airport activities. It takes the view that what sets airports and their associated aviation partners (airlines, ground handlers, retailers, air traffic control, etc) apart from most other sectors is their ability to facilitate and generate wider economic activities.

By way of explanation direct, indirect, induced and catalytic economic impacts may be interpreted thus:

The first three effects reflect air transport as an economic activity in itself while the last effect arises out of air transport acting as a catalytic agent inducing economic development in other industries. ‘Catalytic’ may be regarded as a euphemism for ‘wider economic benefits.’

This category ‘catalytic effects’ is a fairly recent one and suggests that air transport and airports are ‘catalytic agents’ stimulating economic activity in industries that are not directly derived from or connected to air transport activities. Catalytic effects may indicate how air transport might actually serve as a pre-requisite for economic activity and proponents of that theory would no doubt point to the rise of airport cities and their kindred aerotropolises, of which there are now in excess of 85 worldwide either operational or under development.

The catalytic category is more complex than the other three and can be subdivided into the subcategories in the table above.

Moreover, it goes without saying that, as with many other sets of economic measurement, impact studies and even their fundamental rationale have come into question. The principal objection to this kind of econometric analysis is the causal direction. In the classic chicken and egg scenario it is sometimes difficult to imagine which comes first, growth in air transport or growth in the economy. It is also often possible to make a strong case that economic activity would have taken place without the existence of a neighbouring airport and many economists are happy to do that.

However, such highbrow academic discussions are not considered here.

The study reveals that Europe’s airports contribute to the employment of 12.3 million people earning EUR365 billion (USD434 billion) in income annually. Overall, they generate EUR675 billion of GDP each year – accounting for 4.1% of GDP in Europe. For every 10% increase in a country’s air connectivity, GDP per capita is lifted by 0.5%.

(Separately, Avinor recently advised that 2.3% of employment in Norway, or around 60,000 jobs, are linked directly or indirectly to the aviation, in an environment where tens of thousands of jobs are threatened by the falling oil price).

The allocation of these Europe-wide jobs, income and GDP by category is described below 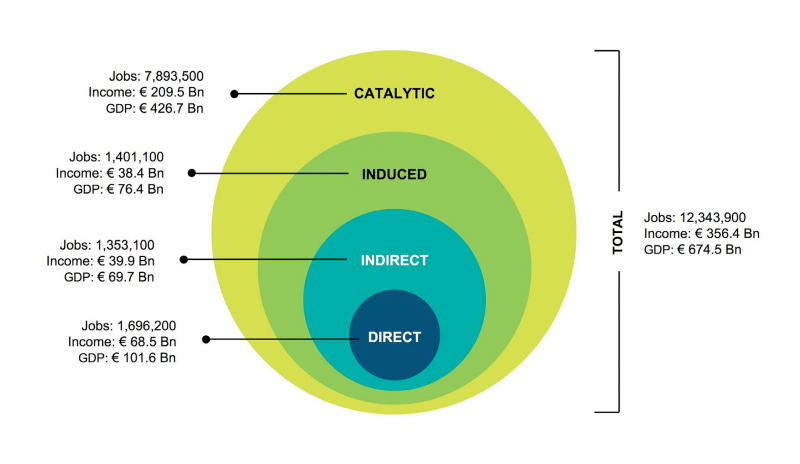 The number of jobs, income and GDP contribution in the vaguer ‘catalytic’ category is evident, amounting to 64%; 59% and 63% respectively.

The geographic breakdown of these jobs is provided in the chart below. The top five countries

(Germany, United Kingdom, France, Spain and Turkey), account for over half (53%) of this direct employment. The relatively small ranking of Spain and Italy, two big countries but both severely affected by economic difficulties, is notable, as is the relatively high ranking of Turkey, which has two fast-growing airports in Istanbul alone and a third about to commence construction.

Direct Employment at Airports in Europe, 2013 The report states that European airports are a source of a wide variety of job categories, with different positions spread on-site and off-site across the airports. A breakdown of direct jobs at airports in Europe, by employment type, is provided in the graphic below. In this figure it is perhaps a little surprising that the security function, which typically makes up a disproportionate segment of airport costs and which remains highly labour intensive, should amount to only 11% of the total number of jobs, including related customs and immigration jobs. One finding of the report that might be considered worrisome when analysing the amount of LCC traffic in Europe is that LCC passengers generate one fifth less jobs than do full service/network carriers. This may be due to the lower staffing levels at LCCs, reduced auxiliary services (such as in-flight catering and airport lounges), and reduced LCC passenger spending on commercial offerings.

This CAPA chart demonstrates the continuing growth until very recently of LCCs in Europe as measured by seat availability. (Note that the first quarter of the year is often one in which LCC aircraft are laid up, hence the dip). On the other hand, although LCC passengers require less direct workers, LCC traffic has been for many airports and areas, the major if not sole provider of growth in recent years. In such cases this traffic has contributed to the catalytic impact of airports.

Moving on to include indirect and induced impacts, the report indicates the combined direct, indirect and induced employment generated by European airports is estimated at nearly 4.5 million jobs, earning a total of EUR146.9 billion in income (wages, salaries, bonuses and other remuneration), and contributing EUR 247.8 billion to GDP (1.5% of the total GDP of the countries in the study). This data is represented in the table below.

(The considerable ‘scatter’ of observations is not surprising, given that there are a large number of other factors that affect economic growth).

Relationship between Air Connectivity and GDP per Capita in Europe, 2000-2012 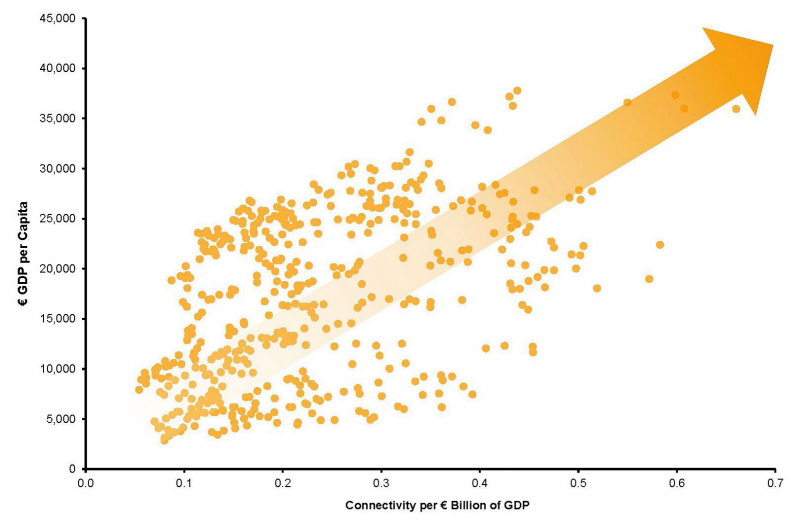 Econometric analysis was conducted to investigate further the relationship between connectivity and GDP per capita. This analysis found that a 10% increase in connectivity was associated with an increase in GDP per capita of 0.5%. Additional analysis found evidence that this relationship was two-way. That is, as an economy grows, it supports a larger air transport sector, but it is also the case that growth in air transport supports economic growth. Ergo, air transport is not merely following economic growth but also acting as a catalyst for growth.

The size of the catalytic impact as a proportion of the national economy varies greatly between countries from just 1.1% in Hungary to 7.1% in Cyprus. Countries with relatively large tourism industries tend to have larger catalytic impacts, such as Cyprus, Spain, Greece and Turkey, reflecting the importance of aviation to their tourism industries. (The impact in some of these countries has been in flux of course as tourism fell then rebounded to various degrees in accordance with the economic climate rather than the meteorological one).

In its own analysis, ACI Europe, making use of data in the full report, identifies top ranking European countries by international tourism and air connectivity.

ACI Europe makes the point that tourism plays a huge role in countless communities across Europe. The European Commission considers Europe to be the world’s number one tourist destination, and indeed the special role of the industry is even recognised in the Lisbon Treaty. The sheer scale of the industry should not be underestimated, it says – Europe welcomed 563.4 million international arriving tourists in 2013, with receipts of EUR368.4 billion, according to the United Nations.

Returning to the Intervistas report, it states that more remote or island nations also tend to have larger catalytic impacts (e.g. Malta, Iceland), suggesting the importance of air connectivity to integrating those nations with the global economy. (The report does not point out that both those countries are also heavily dependent on tourism and, in the case of Iceland, on air interconnectivity by way of transit passengers who often double as tourists).

“How might these economies look if they had substantially reduced air connectivity levels?”

The report asks, “How might these economies look if they had substantially reduced air connectivity levels?” For example, if many of the direct and highly frequent services did not exist, passengers would have limited or no options to travel to/from these countries, or would have to travel via other hub airports. In such a scenario, it is easy to imagine that tourism to these countries would be much lower, that the overall volume of trade would be substantially lower, and that some companies would choose not to locate or expand in these countries. The net effect of this would be smaller, slower-growing economies.

It insists that these figures are not attempting to credit airports solely with creating 2.6% of the European economy. These economies are far more complex than that. It takes a wide range of players acting together to generate economic growth – government, business, infrastructure providers, residents and others.

For example, if no one had decided to build large amounts of hotels in many of these countries, tourism would also be substantially lower; travel and accommodation are mutually dependent. What the estimates do show is that without European airports, and particularly without the diverse and affordable connectivity supported by these airports, the economies of these countries would not be as large, affluent or diverse as they are today.

Turning to Total Impact, the report finds that combining the direct, indirect, induced and catalytic impacts airports in Europe generate or facilitate over 12.3 million jobs earning a total of EUR356.4 billion and EUR675 billion in GDP, equal to 4.1% of GDP of Europe. Part 2 of this report will look at a range of items including the impact on employment of failure to provide adequate infrastructure.