As European LCCs such as Air Berlin, Ryanair, easyJet, Vueling and Wizzair expanded their capacity and traffic in 2009, their full service competitors have been in contraction mode, as they sought to reduce losses.The members of the Association of European Airlines (AEA) handled 20 million fewer passengers in the year, a reduction of nearly 6%. Within Europe, where they compete directly with the short haul LCCs, cross-border traffic was down 5.3%. the members of the European Low Fare Association (ELFAA), by contrast, increased passenger numbers by 8.7%, to 13 million.

Low cost airlines, as defined by OAG, now occupy a capacity share of 36.1% within EU states. Europe’s Big Three LCCs - Ryanair, easyJet and non-ELFAA member, Air Berlin - handled over 9.7 million passengers in Feb-2010 between them, a 7.4% year-on-year increase, preceded by growth of 7.3% to 9.5 million passengers in Jan-2010, for year-to-date passenger numbers exceeding 19 million.

The three carriers between them handled over 139 million passengers in 2009, a 7.7% year-on-year increase and a massive 80% increase from 2005 levels, showing their importance not only within the LCC sector, but within the overall European air transportation market in general. LCCs accounted for some 36% of seats within Europe last year. 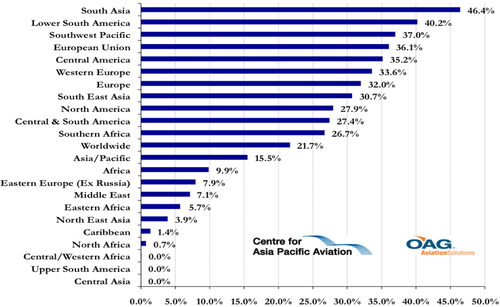 For the most recent month, Feb-2010,  the bulk of the 7% growth seen among Europe’s three largest LCCs was attributed to easyJet (not the usual Ryanair). easyJet reported double-digit year on year passenger growth in the month (of +12.3% to 1.4 million), while Ryanair and Air Berlin both reported single-digit growth, of 6% and 3.1%, respectively.

Air Berlin prioritising profit margins over market share, but growth in both areas in Feb-2010

Meanwhile, Air Berlin has continued to report impressive increases in RASK over the past two years, stemming from its effective capacity deployment plans and acquisitions that have reduced fare competition in some core markets.

In Feb-2010, Air Berlin reported a 3.3% year-on-year increase in RASK to EUR 5.51 cents, with this coming off growth of double-digit growth of 12.1% in Feb-2009. Air Berlin has only reported two months of RASK reductions in the past two years, an impressive record considering the operating environment. In FY2009, the carrier reported a revenue per ASK increase of 7% year-on-year, to EUR 5.75 cents. 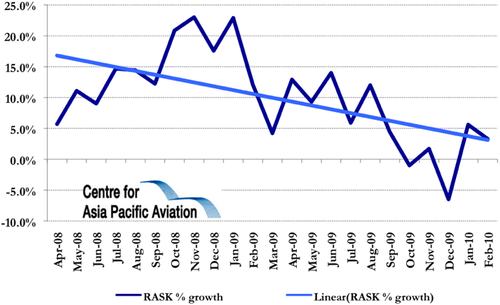 The carrier’s yields have remained well above levels of two years ago, with RASK in Feb-2010 up some 15.4% over Feb-2007 - continuing its trend of double-digit increases over 2007 levels. 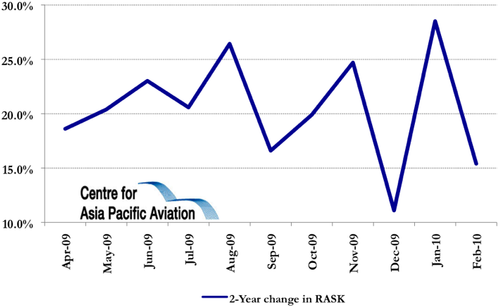 The implications of the LCCs’ market expansion potentially transcend merely the local intra-European services. In our report, Airline structural change in Europe: a major turning point – if labour allows it,

we noted the various ways – often with a common theme – that the major European carriers were adapting to combat the inroads made by the low fare operators.

As the full service airlines’ intra-European market share is eroded, they not only suffer financial losses in head to head competition, but also lose valuable parts of their connecting services into long haul operations – where, for the time being, they are generally free from low cost operator competition.

That immunity is gradually being threatened. Long haul remains largely the preserve of major network flag carriers, but, as the European market becomes crowded, LCCs will look increasingly towards a refined model of the traditional long haul operation. This offers not only fresh pastures in their own right, but also valuable feed into their now-powerful short haul European services – often along with the promise of higher yields.

Long haul low cost operations from Asia Pacific are establishing a trend, with AirAsia X and, soon, Jetstar, offering service into Europe with a lower cost base. Each has already established the economics of long haul operations within their own region.

Meanwhile, in Europe, Air Berlin is offering another model, as it evolves into much more than a short haul low cost operator.

Air Berlin’s strategy is to focus on maintaining profit margins over building market share although the carrier, with the acquisition of the TUIfly routes, has so far managed to grow market share and unit revenues concurrently.

By taking over an established network, as opposed to growing it organically, Air Berlin was able to make a quantum leap into a whole different operation, while maintaining its low cost profile. TUIfly’s international network embraces a very cost-efficient array of routes to north America, the Caribbean, northern and southern Africa and Asia.

The more cautious and route-strategic approach of this increasingly powerful competitor is not escaping the attention of its peers.

With their well-entrenched European networks – usually together with the advantage of multiple “hubs” – it is surely a matter only of time before several of the larger European LCCs link into long haul international services.

Whether they do it organically, using their own aircraft, or whether they seek low cost partners (as many of the Asian and north American carriers already are); whether they adopt formal interlining and connectivity, or simply make it easy to self-connect at busy hubs, it would appear that the nightmare for full service airlines is still unfolding.

Many network airlines still have the underlying power which membership of a global alliance brings. These undoubtedly help preserve their legacy advantages. But sustained low cost operations have been shown to have remarkable resilience, usually far beyond traditional expectations.

So any full service airline now undergoing a substantial restructure of its short haul operations would do well to have provisional plans in place for modifying its long haul thinking as well. Hoping against hope that all that nice premium traffic will return to the fold no longer offers a suitable strategic foundation for the long term.