Europe’s full service airlines continue to cut seats at an increasing pace, with Association of European Airlines (AEA) members displaying commendable capacity discipline. But ongoing weakness will demand even more capacity restraint in the weeks and months ahead.

For the week ended 24-May-2009 (Week 21), total traffic (RPKs) for AEA members was down 9.3% year-on-year, a mild improvement on the previous week, but still the third week in a row demand has fallen by 9% or more. 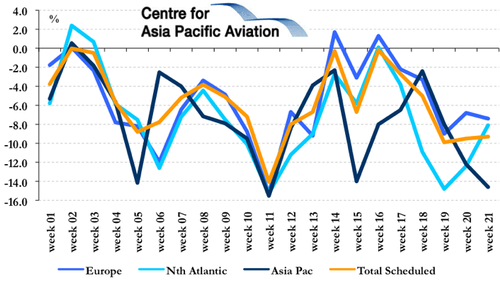 Asia Pacific traffic was clearly the worst performer, down 14.6%, the second consecutive week of double-digit declines. Cross-border European traffic was also weaker, although only mildly so, dropping from -6.8% in Week 20 to -7.4% in Week 21. North Atlantic traffic somewhat arrested its decline (after three consecutive weeks of double-digit falls), down 8.1%, compared to the 12.4% in the previous week. (See The Centre's recent US carrier traffic review for April). 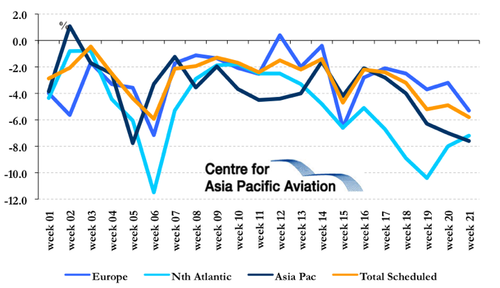 The Association of Asia Pacific Airlines’ (AAPA) reports Apr-2009 traffic improved somewhat over 1Q2009, indicating that the region “may at least be through the worst”, although business conditions are difficult and the April figures were still poor. AAPA Director General, Andrew Herdman, commented that some Asian economies are “holding up reasonably well”, although he also said the “outlook for the remainder of the year is one of continued challenges.”

Capacity reductions by AEA members on cross-border European markets were again the smallest, down 5.3%. 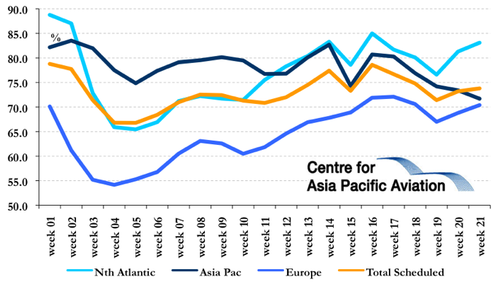 Outlook: More “green shoots”, but not out of the woods yet

The Conference Board stated late last week that the Leading Economic Indicators for the Euro area suggested the “bottoming out process may be getting under way”, with European economic performance improving more rapidly than that of the US, although off a lower base.

IATA too is suggesting that the “worst may be over”, although there is no sign of a recovery just yet.

In short-haul markets, AEA member airlines remain under pressure from European LCCs, with Air Berlin, Ryanair and easyJet all maintaining their expansionist strategies. Virgin Atlantic CEO, Steve Ridgway, stated the situation for the carrier is “not about making a profit this year, it’s about making sure we protect our cash…Fares and yields are at all-time lows and the premium market has shrunk dramatically”. Virgin Atlantic has stated that no network airline will be profitable in 2009, as the “toughest-ever” market is forcing carriers to cut their prices to record lows.

Virgin Atlantic called upon the EU to extend the suspension of slot usage regulation that require airlines to use their slot allocations 80% of the time beyond the current 24-Oct-09 timeframe. Mr Ridgway told the Associated Press, "the important thing is that this happens during the Winter. The industry needs to balance capacity to the demand that is out there".