Association of European Airlines, ACI Europe and EUROCONTROL this month reported trends of continued traffic growth in 2011, although an imbalance between capacity and traffic growth has been noted, having a negative impact on load factors and likely also yields.

Traffic levels have also been impacted by Middle East unrest and the 11-Mar-2011 earthquake and tsunami in Japan, which has resulted in EUROCONTROL downgrading its growth forecasts for 2011 and 2012. ACI Europe has also noted that patterns of growth is contrasted by national and regional markets and that “growth is definitely not a reality for all of Europe’s airports". 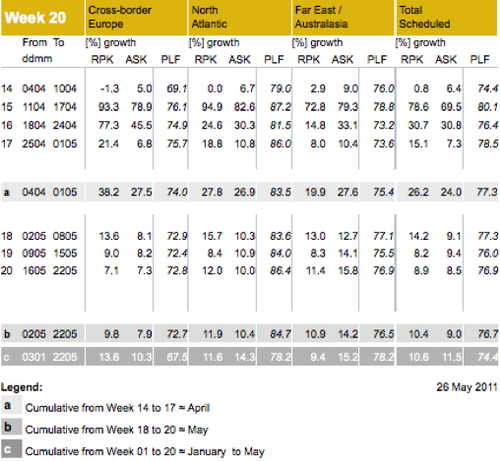 During the period, traffic (RPKs) growth exceeded capacity (ASKs) growth on cross-border Europe services while capacity (ASKs) was ahead of traffic (RPKs) growth in both North Atlantis and Far East/Australasia services.  The largest growth in traffic was witnessed in cross-border Europe services while capacity growth was at its highest on Far East/Australia services.

Load factors were the strongest on North Atlantic services, averaging 78.2%. Meanwhile, weekly load factors for the EU cross-border traffic are comparable to the 2010 levels (except the shift during the Easter break, happening later in 2011 than in 2010). AEA reported declining load factors in Feb-2011 and Mar-2011 on a year-on-year basis as capacity is brought back onto passenger markets while demand growth was shrinking during the period.  Part of this low demand is explained by the recent North African political unrest, Middle East upheaval as well as Japan disaster.

Association of European Airlines (AEA) members handle around 377 million passengers and 6 million tonnes of cargo p/a, operating 2,800 aircraft serving 630 destinations in 163 countries with 12,000 flights a day. They provide around 392,000 jobs directly, and generate a total turnover of EUR82 billion, according to the Association.

ACI Europe, earlier this month, stated that 2011 started 2011 started with some “very promising traffic growth for European airports, on the back of improving economic conditions, consumer confidence picking up and airlines finally adding more capacity”. ACI Europe however noted that “the picture is still very contrasted, depending on national or even regional markets. Growth is definitely not a reality for all of Europe’s airports.”

“Political instability and unrest in North Africa and the Middle East continue to affect many airports exposed to these markets, in particular for leisure traffic. And of course, fuel prices are going to be a decisive factor as regards traffic development in the months ahead,” ACI EUROPE  Director General Olivier Jankovec noted.

EUROCONTROL revises down traffic forecast for 2011 and 2012

EUROCONTROL, on 31-May-2011, revised down its forecast for 2011 traffic (flights), which the pan-European air navigation services provider expects to increase 3.2% (±0.8%) in the year.

EUROCONTROL said its downward revision follows the "severe disruption" to services to and from Egypt, Libya and Tunisia in the first part of the year. Based on a gradual recovery scenario from the current situation in these three States, the North African disruptions are expected to cut around 1% off European air traffic in 2011, EUROCONTROL forecast.

EUROCONTROL growth of IFR movements in 2011 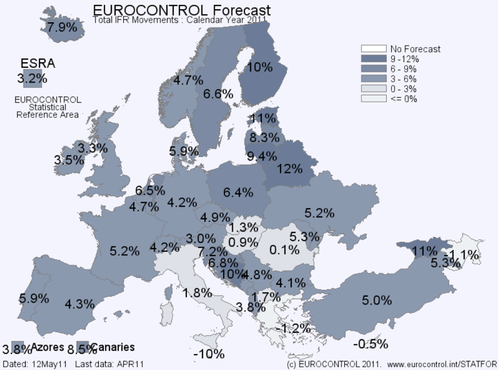 EUROCONTROL expects 2012 to be similar with 3.1% growth (±0.9%) with the forecast similarly revised downwards slightly. Part of this 2012 growth is due to the leap year effect as well as major sporting events and the forecast also includes the introduction of the Emission trading Scheme (ETS). Total flights in 2012 will slightly exceed 2008’s volumes, according to EUROCONTROL.

EUROCONTROL growth of IFR movements in 2012 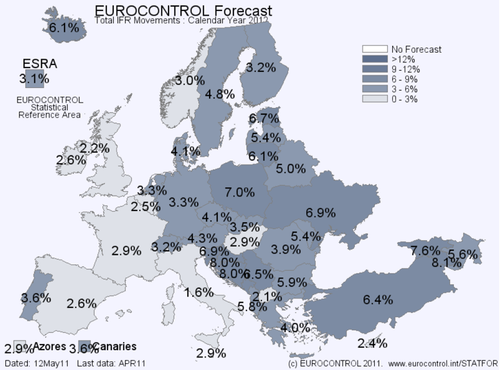 Meanwhile, the AEA, ACI Europe and the European Commission this month stated that the air industry has improved its emergency procedures since last year’s ash cloud and it is better positioned to handle the current crisis.

European Commission’s transport chief, Vice President Siim Kallas noted that Europe’s airlines report “far fewer cancellations” during the second ash crisis in May-2011,  compared to similar events in Apr-2010. It is estimated that the 2010 volcanic ash crisis cost airlines USD1.8 billion in lost revenue and the global economy as a whole, USD5 billion.