Lufthansa Group's Capital Markets Day on 24-Jun-2019 included a significant presentation on the restructuring of its point-to-point airline division, Eurowings.

Loss-making in 2018, the airline's outlook for 2019 was downgraded by Lufthansa in a Jun-2019 profit warning from break even to a bigger loss than last year.

The turnaround plan for Eurowings includes transferring its long haul routes into the group's network airlines division, refocusing Eurowings on profitable short haul routes in its core markets, and no longer integrating Brussels Airlines. There is also a detailed plan of measures to achieve a significant reduction in unit cost by 2022.

Its plan looks feasible, but the challenges are significant.

As data presented in this report illustrates, Eurowings is a long way behind the profit margin of most other LCCs in Europe. Even if its plan is successful, it will only achieve break even in 2021.

Moreover, CAPA analysis shows that its 2022 unit cost target is still above rival LCCs such as Vueling and easyJet and significantly higher than the levels achieved by ultra LCCs Ryanair, Wizz Air and Pegasus.

Eurowings has been a regular loss-maker

Eurowings reported an adjusted EBIT loss of EUR231 million in 2018, based on revenue of EUR4,230 million.

Its 2018 loss margin of -5.5% was its worst performance since Lufthansa started to report separate results for the business in 2015. In that year it made a positive margin of 2.0% but fell to a negative 4.4% loss margin in 2016, both years before the inclusion of Brussels Airlines in its results.

In 2017 the combined Eurowings/Brussels Airlines made an adjusted EBIT margin of 1.5%, before slumping into loss again in 2018.

The original target for 2019 was break even, but a Jun-2019 profit warning from the Lufthansa Group revised this down to an adjusted EBIT margin range of -4% and -6%, pointing to what could be Eurowings' worst ever margin.

The break even target has been pushed back to 2021.

Subtracting the positive result of equity investments from Eurowings' reported profits, its operating margin was -6.0% in 2018. This made it the second least profitable of Europe's principal LCCs in 2018, beating only Norwegian's margin of -7.1%.

Ryanair had the highest operating margin, with 15.7%, and no other leading LCC that reports financial results made less than 8% (see chart below).

Eurowings' CEO presented a turnaround plan at Lufthansa Group's Capital Markets Day on 24-Jun-2019. This involves a number of actions, both of a fundamental strategic nature and of an incremental operational nature.

As a fundamental change, Eurowings will exit the long haul business and transfer commercial responsibility for this part of its operation to Lufthansa Group's network airlines and refocus its network on short haul.

It will also discontinue the integration of Brussels Airlines into Eurowings, allowing a closer embedding of the Belgian carrier into the network airlines segment of the group (more details on the plan for Brussels Airlines will be given at the end of 3Q2019).

The short haul network of Eurowings, refocused on profitable routes in core markets, will grow ASKs at the very modest rate of 1% pa until 2022, by contrast with an average of 19% pa from 2015 to 2018.

The Eurowings brand will reduce the number of AOCs used in Germany from four in 2018 (Eurowings, Germanwings, Eurowings Europe, LGW) to two in 2019, and then to one AOC.

Cost savings this year will reduce this to EUR6.10 cents in 2019, based on short term turnaround measures, the elimination of integration cost incurred in 2018, and the benefits of operational stability investment. 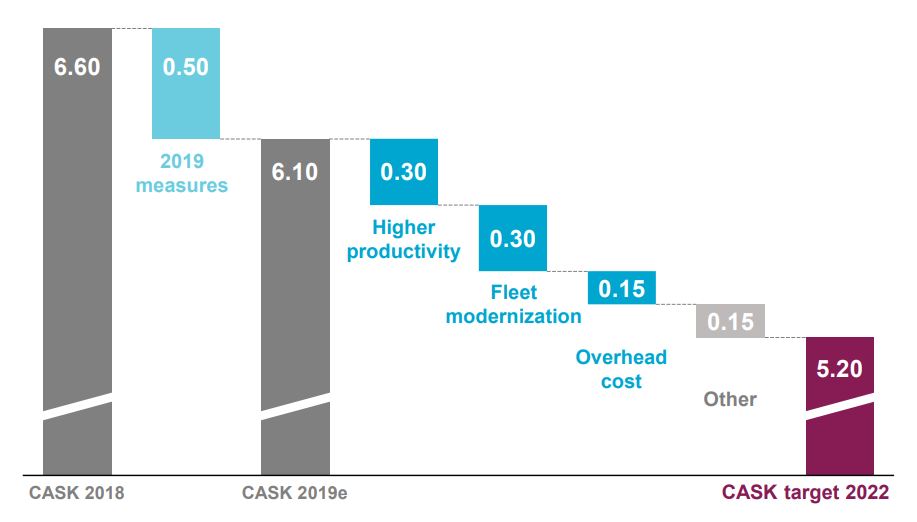 Between 2015, the first year for which separate results for Eurowings are available, and 2018, the Lufthansa Group's point-to-point airline segment's ex fuel CASK fell by 29%, from EUR8.29 cents to EUR5.87 cents.

These figures are CAPA calculations based on reported data for the Eurowings segment of the group. The 2015 data is for both Eurowings and Germanwings branded flights. Data from 2017 also includes Brussels Airlines (the Germanwings brand had been dropped by then).

Although this unit cost reduction appears impressive, a significant proportion of the difference can be attributed to the 46% increase in average trip length over the same period, resulting from Eurowings' own long haul development and the inclusion of Brussels Airlines.

The 2018 ex fuel CASK figure of EUR6.60 cents for Eurowings short haul excluding Brussels Airlines has fallen by 20% from the 2015 figure derived by CAPA.

This a more meaningful like-for-like comparison, since the average trip lengths for both years are closer to each other and Brussels Airlines is excluded from both figures.

The target of EUR5.20 cents in 2022 would mean another reduction of 21% over four years, which is slightly less ambitious than the 20% cut achieved over the past three years.

Eurowings' 2022 unit cost target looks feasible by comparison with its track record and is backed up by a detailed plan to achieve it.

However, even at the new level targeted, Eurowings' ex fuel CASK will still be above the 2018 levels of any other significant LCC in Europe. It will be more than double the level of the ultra LCCs Pegasus, Ryanair and Wizz Air.

Clearly, Eurowings' unit cost will never be comparable to those of ultra LCCs. However, its 2022 target will still be approximately 15% higher than the CASK ex fuel of easyJet and Vueling, both of which have a broadly similar average trip length to that of Eurowings.

*Nearest financial year to calendar 2018.
**Transavia ex fuel CASK is a CAPA estimate based on reported total CASK and an estimate for fuel CASK.
Source: CAPA - Centre for Aviation, airline reports and presentations.

Eurowings may finally be able to call itself an LCC (just), but challenges remain

If Eurowings' 2022 CASK ex fuel target is achieved, it will at least be in a similar bracket to these airlines, giving it more justification than ever before to be considered an LCC.

Nevertheless, it will still have more cost cutting to do, particularly if the leading LCC and ultra LCC competitors themselves make further cost efficiency gains.

Moreover, in the intervening period Eurowings will face the ongoing challenges of implementing its plan successfully and facing growing competition from other LCCs that already have much lower unit costs and higher margins.