Emirates Airline is one of the most high profile and glamorous of the Emirate of Dubai’s jewels. So was Dubai World until its massive debt burden started to make it look shaky last year. But, apart from the common link to Dubai’s credit stature, that is where the commonality will probably end. Emirates the airline is a cash-flow rich entity, which, according to its most recent annual report, also had cash assets of USD2 billion at 31-Mar-2009. The carrier recently reported an improved, USD204.9 million profit for the six months to 30-Sep-2009; despite a 13.5% fall in revenue for the period, costs had been pruned by 15.8%.

But it was inevitable that, when Dubai World yesterday shook global financial markets by seeking a six month moratorium on repayment of its debt – reputedly USD59 billion in total – rumours immediately abounded about the next steps for Emirates. After all the carrier is very near the epicentre of the storm.

That the announcement in this typically opaque country came after local exchanges closed, just before the three day Eid holiday, will only ensure that rumours and uncertainty reverberate around the world at least until after this weekend. It was also Thanksgiving in the US, with markets closed there, so Friday’s typically quiet day on Wall Street is likely to be a lot more active than usual; a lot of financial markets employees’ holidays will be shaken up, as financiers struggle to assess the extent of the damage. European share markets shed over 3% in trading in an immediate reaction to the Dubai World announcement, although Asian markets in morning trading today, although significantly down, were not quite as badly hit. Most will be waiting for a lead from Wall Street later today.

One of the constant rumours that has emerged again in the wake of this week's revelations is that Emirates Airline will be folded into neighbouring Etihad Airways, whose home Emirate, Abu Dhabi is the capital of the UAE and is the richest of the seven Emirates. The logic for this is that Abu Dhabi has money and Dubai has debt. But beyond that, the reasoning peters out. In fact, the UAE is a federation of neighbouring emirates, each governed by a separate family.’

It is highly unlikely that Abu Dhabi could afford to allow its brash neighbour to fold under debt problems, so the Dubai World funding crisis offers both an opportunity (to rein the emirate in the emirate’s excesses) and a challenge, in that the price of a collapse of Dubai’s system would be destabilising for the young country.

The potential for Emirates Airline to be taken over by Etihad in the current circumstances could be likened to the prospect of Air France taking over Lufthansa if Germany’s debt problems became severe.

Anything is possible, but some things are more likely than others.

Perhaps the more relevant concern for Emirates is the effect that the scare will have on the cost of debt. The airline has followed a relatively conservative strategy in its borrowings, but it is inevitably exposed to interest rate fluctuations where those rates are not fixed.

In many ways Emirates appears to defy gravity, as it expands across the world. But it is still grounded in the same world financial system and subject to the fluctuations of the capital markets. As noted in the carrier’s annual report on the financial year to 31-Mar-2009, “Emirates borrowings and lease liabilities (net of cash) after including operating leases, at 31 March 2009, comprised 61% on a fixed interest rate basis with the balance 39% on floating interest rates. A one percentage point increase in interest rates would increase the interest charges and the operating lease charges (net of interest income) during the next financial year by AED 109 million (2007-08: AED 57 million).” So the sensitivity to higher interest rates is clear, should the outcome of this week's events destabilise the lending process for the UAE.

That said, the airline was also last week projecting a profit of USD1 billion for the coming year.

Emirates has been consistently profitable for several years and apparently without any form of government debt-guarantees, despite a mammoth order book. 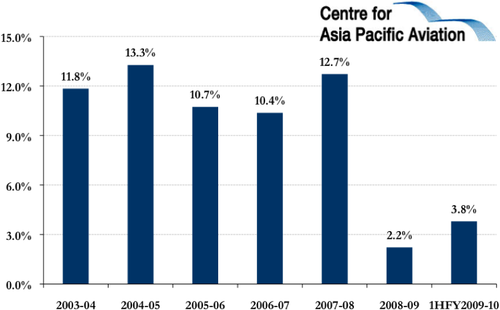 The carrier is the biggest customer for the A380, with five already in service and another 55 in the pipeline.

Even while the global financial crisis was undermining plans of most airlines, Emirates has continued to expand at rapid rate, taking advantage of the openings resulting from liberalisation of access to markets.

Capacity is projected to grow at 22% over the next year – at least, before this week’s events. 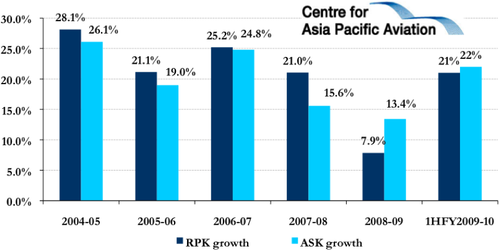 With the exception of the dark days of late 2008 and early 2009, load factors have also been maintained at reasonable levels, although yields have slipped substantially, particularly in the middle of this year. 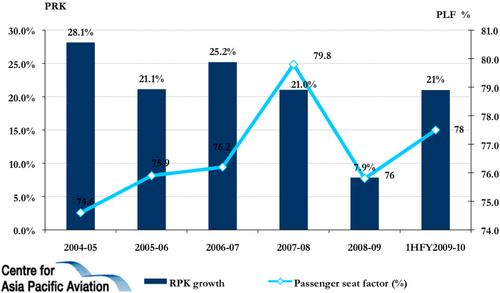 But, because there is only a relative handful of aircraft due for delivery in 2010 ( eight A380s and two B747-8s, with several months’ delays likely on the A380s), the carrier was to make a decision on whether or not to order another 11 new aircraft from Airbus and Boeing within the next two months. Here the hiccup in Dubai may cause a change of plan.

Merely the aura of uncertainty around anything Dubai-related is likely to complicate the process of any new fund raising, so that some questions arise over Emirates’ immediate plans to continue with its expansion.

Management has said that the airline is anxious to expand while others are contracting, as well as being better equipped to expand when the good times return. But the funding bill is clearly a massive one, with so many aircraft coming on stream. This is a good time to be expanding if finances allow – for example last year’s skills shortages have given way to a reasonably benign environment – but the money has to come from somewhere.

Emirates' Senior VP Commercial Treasury, Brian Jeffery, was  earlier this week quoted as saying that export credit financing would be a part of the carrier’s funding process, but that (according to Business 24/7) “Discussions with banks are ongoing with respect to further mandates stretching to July 2010 as per the current delivery schedule… We believe that the depth of appetite for government-guaranteed bonds is huge and easily sustainable as part of Emirates' overall diversified funding strategy."

To the extent that funding is not already set in contract, it is quite probable that there will now be delays.

At  the same time as it has been building a massive transfer hub capability, Emirates (and Dubai Tourism) had been working hard to establish a solid third and fourth freedom market, in order to provide a better risk profile, but also to fulfill its role as part of the “Dubai Inc” complex, feeding tourism dollars into the economy.

With a considerable expatriate business community living locally and an expanding array of inbound tourism attractions, this travel sector had come to represent some 40% of traffic by last year, with a tourism market, remarkably, bigger than India’s. Such is the power of aviation in an open skies environment.

But now, as the expatriate community is greatly thinned and the sparkle of the emirate is severely dulled, Emirates’ traffic will be suffering as a result. However, recent reports suggest that not only are flights seeing a solid improvement on the damand side but in step with that recovery, yields are also improving.

Dubai's request for a six month moratorium on debt repayments while restructuring occurs has unsettled a global market where credit committees are ultra-cautious. It is early days to assess how seriously the world will assess the impact of Dubai. Most recent stock exchange reports, including morning trade in Europe's today, suggest that the initial response of the markets may have been overblown.  Yet, even if that is tha case, the Dubai financial outlook will emerge battered and bruised.

Emirates airline will feel that cold wind in its debt financing; but otherwise it an airline which is more resilent than most. Even if "the Emirates bubble is bound to burst" - a theory we do not subscribe to - at some time, it does not look as if that timing is imminent.