There was some rebound in air travel and freight volumes in Apr-2011, following the demand shocks from Japan and MENA in the preceding two months, according to IATA. The seasonally adjusted level of air travel (RPK) indicates that worldwide air travel volumes are now 5% above pre-recession levels, although for the past nine months have shown little further improvement, as the trend in global traffic has remained flat. This has raised concern that the post-recession rebound has run out of steam. 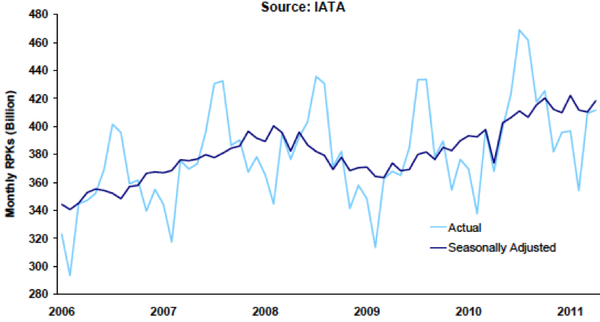 The past three months have been depressed by the demand shocks of Japan and MENA but the flattening out of the previously strong upward trend began in the latter part of 2010. This was due to a decline on some domestic markets, rather than international. In fact, international air travel markets rebounded to a new high in Apr-2011, up 7% on their previous peak.

Meanwhile, air freight markets (FTK) are now in line with pre-recession peaks, but since May-2010 the market has lost 6%. Once the infleunce of Japan and MENA diminishes, robust world trade and business confidence are expected to generate renewed expansion in air travel and freight during the second half of the year.

The partial rebound in demand together with the improvement in load factors experienced in the month will have helped to ease the squeeze on profits being experienced by many airlines, according to IATA.

However, the price of jet kerosene rose USD6 a barrel to just over USD140 a barrel between Mar-2011 and Apr-2011, which will have contributed to a further decline in volumes on the price-sensitive economy seat segment. Fuel prices have since eased a little but the ability of airlines to maintain profitability in this high-cost environment will depend critically on whether traffic demand continues to rebound in the months ahead, as it did in Apr-2011.

Worldwide air travel growth rose from a depressed 3.2% in Mar-2011 to 11.9% in Apr-2011. On international markets the rebound was more marked, with an acceleration from 3.7% in Mar-2011 to 16.5% in Apr-2011. However, the comparison with Apr-2010 exaggerated the year-on-year improvement as travel volumes were depressed in Apr-2010 due to the closure of European airspace by the volcanic ash cloud.

Passenger capacity grew more slowly than traffic volumes in Apr-2011. On a month-on-month basis, passenger capacity grew by very little in Apr-2011 from Mar-2011 levels while passenger markets expanded strong in the month. As a result there was a rebound in passenger load factors in Apr-2011. The Apr-2011 load factor of 77.4% on global passenger markets is a substantial improvement to the situation in Mar-2011, although the downward trend in utilisation since Nov-2010 is still visible.

International markets were also clearly much stronger than domestic, reflecting the strength of international trade and business confidence. However, the year-on-year comparisons are distorted due to capacity being grounded in Apr-2010 by the ash cloud.

International air travel markets have been more robust than domestic markets in the past six to nine months and rose strongly in Apr-2011 There was a seasonally adjusted 2.6% increase in international traffic (RPKs) between Mar-2011 and Apr-2011, the market to a new high, 7% above the pre-recession high of early 2008. Despite the recent demand shocks international air travel is still growing at an annualised pace of around 3-4%, after stripping out the major distortions to the data. 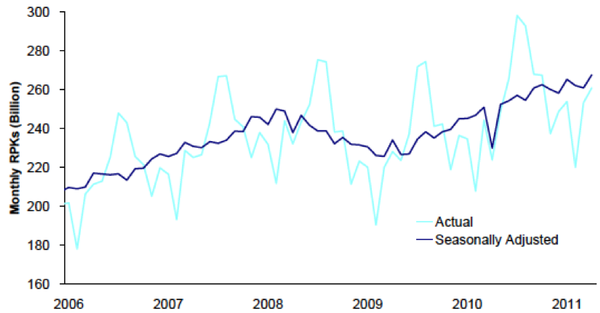 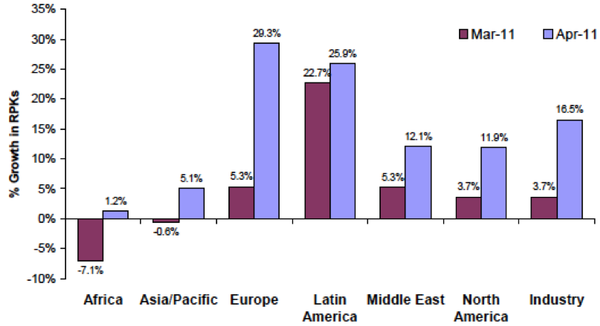 Utilisation of seats also improved significantly in Apr-2011. Passenger load factors have been trending down since mid-2010, as capacity growth began to outstrip demand, and then fell sharply in Feb-2011 and Mar-2011 due to the adverse demand shocks. Half of that decline has been regained on international markets. Load factors are still 2% points down on levels of utilisation in mid-2010, when profits growth was strongest, although the situation at the start of 2Q2011 is better than in 1Q2011. 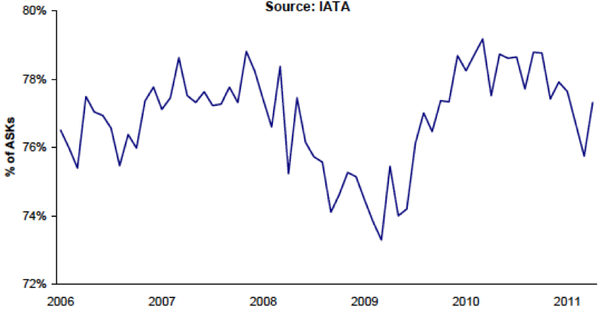 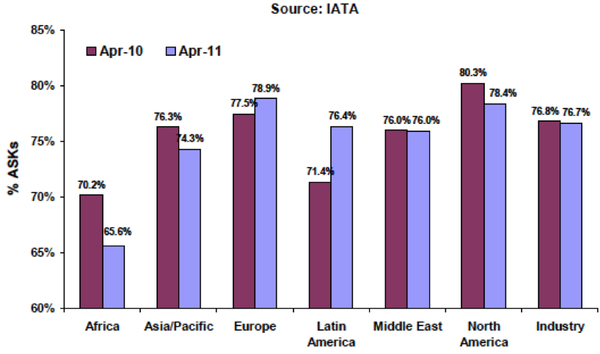 Domestic markets have been the weakest segment of air travel over the past nine months with growth stagnating over this period. Despite the shorter sector lengths on domestic traffic, domestic traffic (RPKs) still account for almost 40% of the total market. 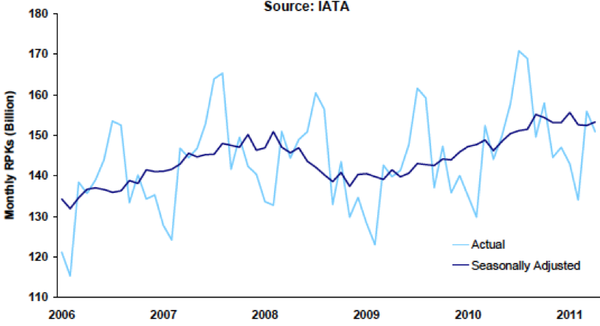 IATA noted that the weakness of the Japanese domestic market is the most “striking” domestic market development. The impact of the 11-Mar-2011 earthquake and tsunami has been to cut passenger travel within the country by 31% in Apr-2011. 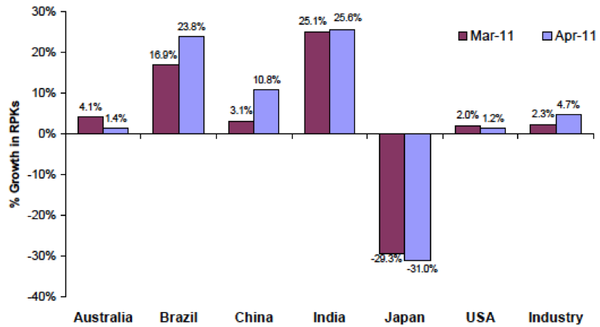 IATA stated it expects reconstruction efforts to start boosting economic activity in the country during the second half of the year, but noted that it is not clear how rapidly domestic air travel in Japan will recover. The severity of the situation in Japan is evident by the exceptionally low load factors for airlines on the domestic market. These fell to just over 47% in April, compared with an average of 60-65% in more normal times, which will be damaging to profitability. Another notable development was the improvement in seat utilisation on the Brazilian domestic market, which should help improve unit revenues for these airlines. 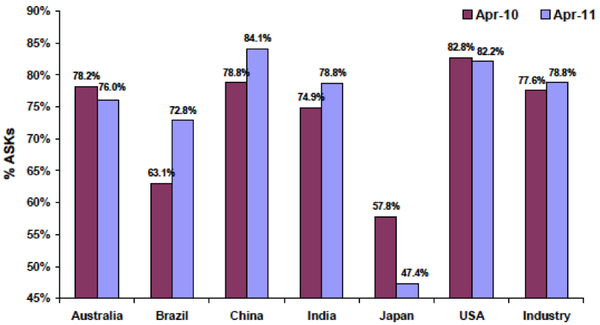 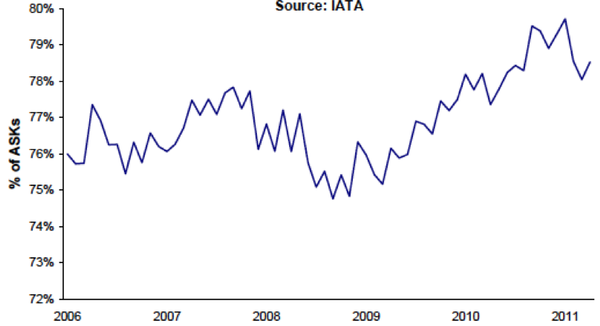 As usual, there are considerable regional differences, reflecting the economic and political situation in the world’s regions.

Traffic (RPKs) flown by African airlines is barely higher than a year ago, as the situation in Egypt and Tunisia keeps the number of flights down by around a quarter. Meanwhile, Asia Pacific airlines saw a modest improvement during Apr-2011 but the impact of stronger growth in emerging markets, such as India, was held back by a further decline in the Japanese domestic market. The biggest contrast to this weakness was provided by a 27.4% surge in the traffic carried by European airlines in Apr-2011, impacted by the ash cloud closure in Apr-2010. 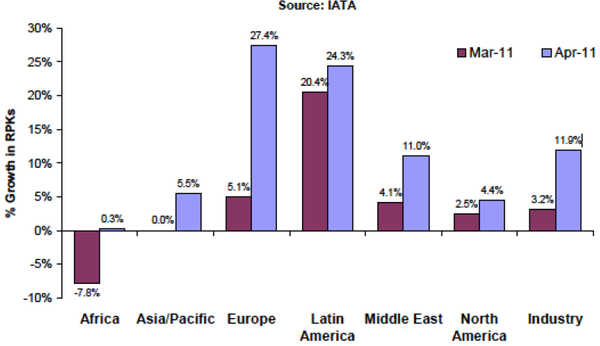 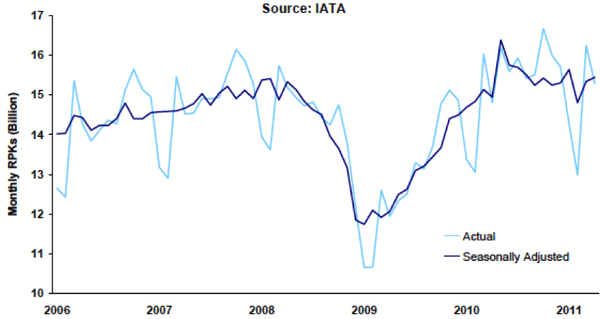 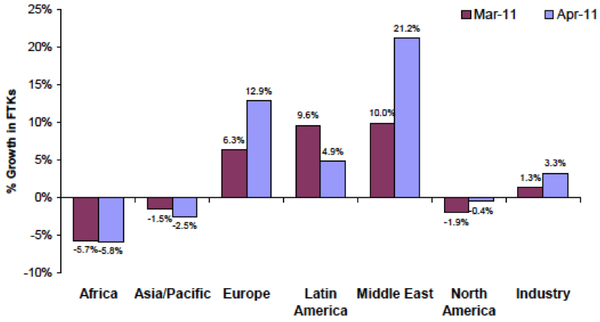 IATA noted that even with this improvement these growth rates are a “substantial deceleration” from the market growth seen in 2010.  That air freight expansion peaked just after the ash cloud closed much of Europe’s airspace last April. Since then the size of the air freight market has shrunk by 6%.

Meanwhile, capacity on air freight markets is continuing to expand at a faster rate than demand. Seasonally-adjusted load factors peaked in May-2010 at just over 50%, but have since lost 4 ppts. This downward trend will be undermining unit revenues and partially reversing the strong boost to cargo profitability seen in early 2010. 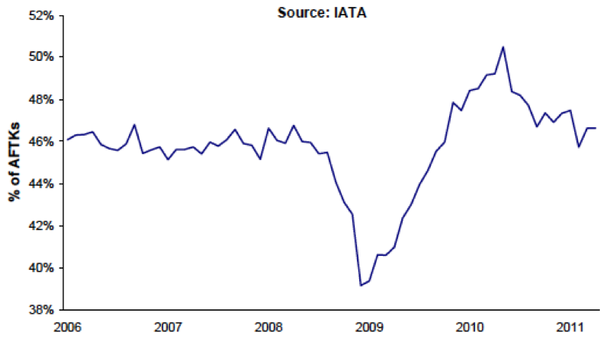 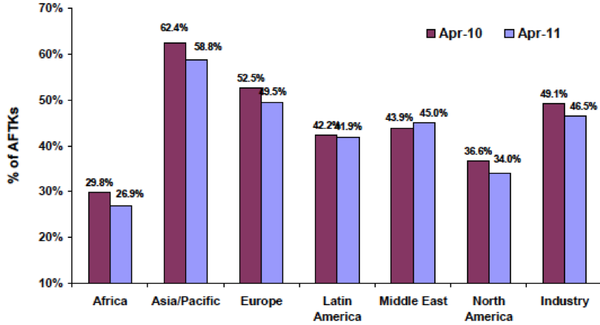 Whereas domestic markets are very sizeable for many regions in the passenger business, this is not the case for airfreight which represents just over 12% of total freight traffic (FTKs) flown. As a result the picture for international freight markets is similar to the system-wide situation. International air freight markets grew by 5.4% in Apr-2011. 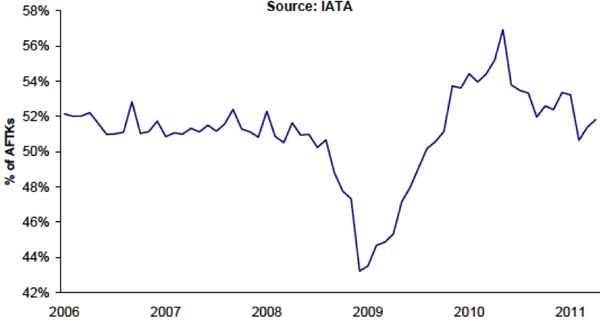 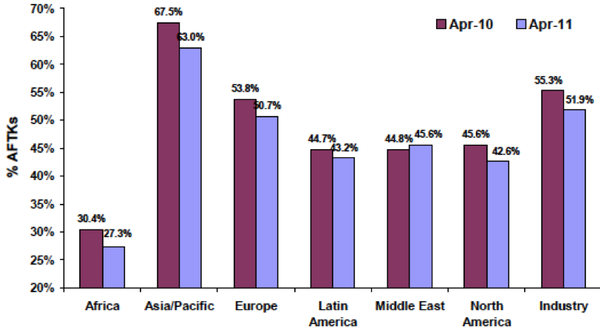 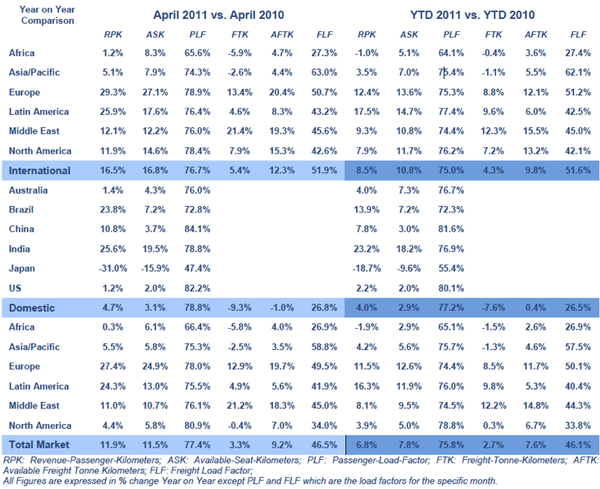 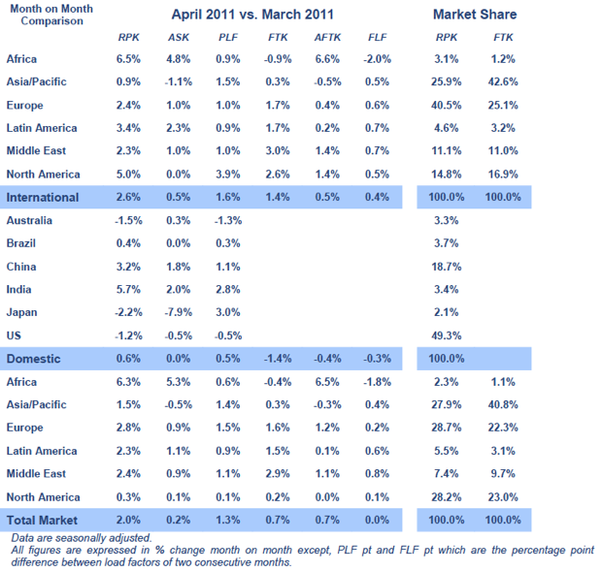