Following an 18 month appraisal process, easyJet announced on 18-Jun-2013 the order of a further 35 current generation A320 aircraft under its existing Airbus deal and a new order for 100 A320neo aircraft, plus a further 100 A320neo purchase rights. CEO Carolyn McCall argued that the deal will enable continued capacity growth of 3%-5% per annum, with costs per seat 11%-12% below its current A319 operations, and support easyJet’s return on capital targets: “Both from a growth perspective, modest cautious growth, but also from a cost perspective, this deal is absolutely critical for the long-term success of easyJet.”

The agreement with Airbus must be approved by shareholders at an EGM on 11-Jul-2013, setting up another potential battle with founder and largest shareholder Sir Stelios Haji-Ioannou, who labelled it: “Yet another huge capital expenditure deal with the same supplier at 'secret' prices... Naturally it raises more questions than answers.”

easyJet's strong share price performance – it has trebled over the past 18 months while the aircraft order was being considered – suggests that the other shareholders agree with Ms McCall.

Ms McCall told analysts and investors at a presentation to discuss the deal that she values the flexibility that the existing contract still provides: “So, if we need to use those six options, yes we will use them... There is no intention at the moment to use the 29 purchase rights... On the other hand, we don’t know what’s going to happen in the next three years and the whole point of mentioning them is because they are part of the current existing framework agreement and therefore, they exist and can be used.”

easyJet has also agreed a new contract with Airbus for 100 A320neo 180-seat aircraft for delivery between 2017 and 2022, and 100 additional purchase rights for any A320neo family aircraft (to be exercised by 2025). Although easyJet plans to take the 100 firm orders as A320neo aircraft, easyJet can convert these to the smaller A319neo or larger A321neo.

easyJet says it has secured favourable delivery dates from Airbus. The delivery schedule is as follows.

Negotiations with CFM and Pratt and Whitney over engines for the new generation aircraft are ongoing, although easyJet has agreed a ceiling price for the new engines. It expects to make a choice “in due course”.

easyJet has spent around 18 months evaluating and assessing the options for its medium to long term fleet growth, based on both technical and commercial considerations. Three airframe manufacturers and two engine manufacturers were included in the process and easyJet's first objective was to establish that they could all meet its technical requirements, fulfil its mission capability and satisfy its fleet planning scenarios. It concluded that all of them – Airbus, Boeing, Bombardier, CFM and Pratt and Whitney – could meet easyJet’s performance requirements.

easyJet rejected the Bombardier CSeries because it is too small for its current 180-seater requirements, although easyJet says it will reconsider the aircraft for its potential 150-seater replacement from 2021 onwards. CFO Chris Kennedy said at the analyst presentation that the CSeries, “looks like a very good aircraft. It’s a new airframe so it does give substantial cost savings over and above the offers from Airbus and Boeing. There will always be a need for a smaller aircraft we think in the fleet, but it’s not until much later... It was just too difficult actually to come to a commercial arrangement when your first delivery is going to be 10 years from now.”

The criteria for the commercial evaluation were pricing, flexibility, support packages and guarantees. easyJet selected Airbus, “based on the superior economics it offered and also the flexibility with which they provide it”, said Ms McCall.

Airbus offered a greater discount to the list price for the 100 neo aircraft than the existing deal that easyJet agreed in 2002 and a similar discount for the 35 current generation A320s. easyjet says that Airbus also demonstrated much greater fleet planning and greater flexibility than its competition.

Discounts from list price are not revealed due to their commercial sensitivity, but were widely thought to be in the order of 40% for the 2002 deal. List prices for the A319neo are around USD83 million, for the A320neo around USD92 million and for the A321 around USD111 million.

easyJet's goals for its fleet proposal, which drove its thinking during the evaluation process, were: to introduce more 180 seater aircraft in order to gain unit cost savings and contribution improvement; to deliver additional cost savings through more fuel efficient aircraft; to continue its profitable capacity growth rate of 3% to 5% per annum; to retain its leading network positions and target profitable opportunities within existing markets; and to provide flexibility to react to market conditions, both down and up, as and when appropriate.

easyJet’s assessment, based on its experience of operating both 156-seat A319s and 180-seat A320s for a number of years, is that the unit cost (cost per seat) of flying the larger aircraft is around 7% to 8% lower than the A319. Moving to the new generation A320neo, with its more efficient engines, should deliver a further reduction in unit costs of 4% to 5%, mainly as a result of lower unit fuel costs. The overall unit cost saving of the A320neo versus the current A319 is around 11% to 12%, according to easyJet.

Of the 135 aircraft within the new Airbus agreement, 85 are for replacement and 50 are for growth in accordance with easyJet's stated strategy of growing capacity by 3% to 5% per annum. Ms McCall says that this equates to approximately 19 million to 35 million additional seats over the period until 2022, with 2% to 4% coming from new routes or increased frequencies on existing routes and around 1% from flying larger A320 aircraft on existing routes.

She argues this is, “a really low risk strategy”, estimating that, in its top 20 airports currently, point-to-point routes served by non-LCCs represent around 86 million seats. Given easyJet's cost advantage against these competitors, this segment will be its primary focus for growth. 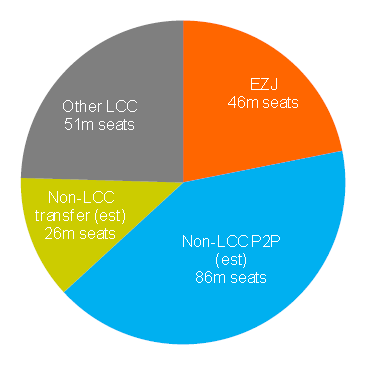 Ms McCall says that the balance between additional frequencies and new routes, “is about 75/25. 75% in favour of building frequency, 25% in terms of new routes ... that would continue, but we would keep that under review... This is not about finding a completely new market that we’re not in at the moment”. 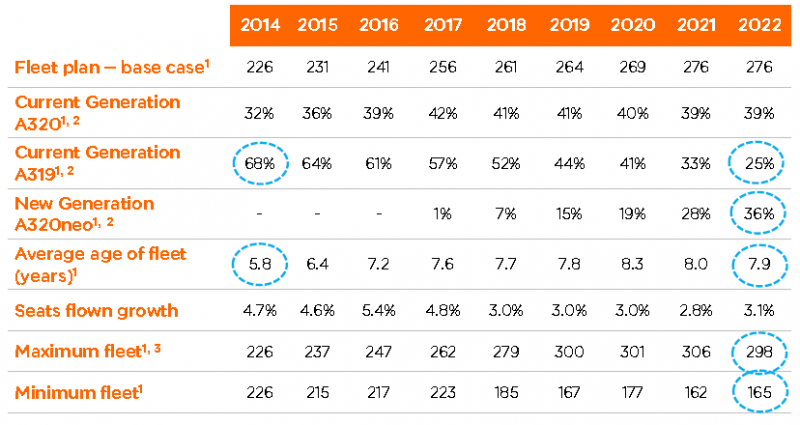 The flexibility in the fleet plan is further highlighted by the chart below. Each line shows the minimum possible number of aircraft in the fleet if all options to decrease the number of aircraft are exercised during the financial year represented by the line. Options to reduce fleet size are early termination of leases and the deferral of orders. 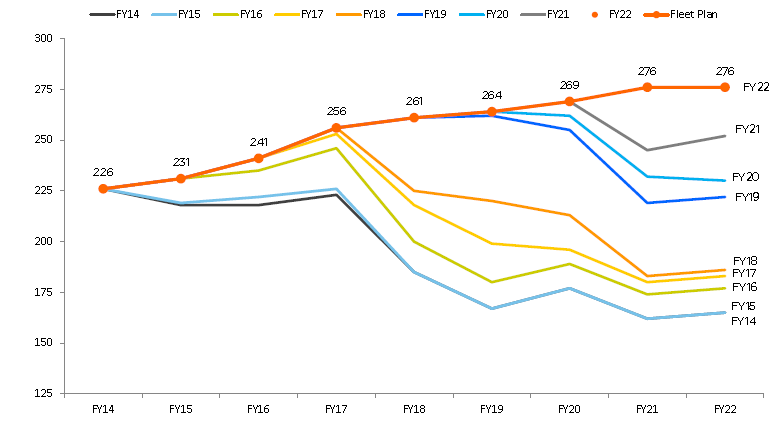 On the question of possible delays to the A320neo programme, Mr Kennedy is confident that there should not be any serious problems: “This isn’t a 787. It’s not an entirely new aircraft... So, I think the programme risk we assessed as lower than obviously a brand new airframe. And also, our delivery schedule, we’re not taking the first. We’re around number 400 in the delivery schedule for the neos, so a lot of the early teething problems, if there are any, should be well out of the way.”

For reasons of commercial confidentiality, easyJet cannot reveal the absolute annual capital expenditure figures that will result from the new Airbus deal, as this would allow the world at large to calculate the unit price for each aircraft. This confidentiality does not please Sir Stelios Haji-Ioannou, easyJet's founder and biggest shareholder, who reacted to the proposed deal by calling for an end to, “the secrecy on aircraft orders”, arguing that the shareholder circular, “must include the actual price to be paid for each aircraft”.

easyJet has given a percentage breakdown of its historic and expected capital expenditure into additional aircraft, replacement aircraft and maintenance expenditure of a capital nature. It has also provided an analysis of its capex as a percentage of its revenues, both historically and for the future.

For the period 2005 to 2012, as easyJet grew the fleet rapidly, total fleet acquisition and overhaul spend was around 18% of revenue, almost half of which was on new aircraft and 42% on replacement aircraft. Maintenance spend was relatively low as the fleet was young.

During 2015 to 2017, the period easyJet refers to as the “bridge period” replacement capex is expected to reduce in order to minimise spend on current generation aircraft, although new aircraft entering the fleet will still account for roughly half of the spend. Maintenance expenditure will increase during this period as the fleet ages and more heavy maintenance is undertaken.

During 2018 to 2022, easyJet expects its spend on additional aircraft to account for only 16% of total capex, with 54% on replacement aircraft as older current generation A319 aircraft exit the fleet. Maintenance expenditure will decrease during this period as the younger new generation aircraft enter the fleet. In total, easyJet expects fleet acquisition and overhaul expenditure will fall from 18% of revenue in the period 2005 to 2012 to between 10% and 12% for the period from 2018 to 2022.

easyJet's financial modelling compared the costs over 20 years for the different aircraft that met its requirements. It was based on an average jet fuel price of USD1,100 per tonne, average exchange rates of USD1.60 to GBP1 and EUR1.18 to GBP1, and included a comprehensive sensitivity analysis around changes in revenue per seat, fuel prices and exchange rates. The modelling analysed various fleet scenarios including one where easyJet does not order new aircraft. It also sought assurances from external sources as to the accuracy and governance of the process.

The deal should meet return on capital employed targets

According to easyJet's analysis, the new aircraft deal is consistent with its financial objectives. In addition to being consistent with its maximum gearing target of 50%, its target liquidity of GBP4 million per aircraft and the continuation of its dividend policy, it concludes that the deal supports its objective of achieving return on capital employed (ROCE) in excess of the cost of capital.

According to a chart presented by easyJet, it has the highest ROCE among European airlines, alongside Ryanair (based on data that was sourced from airline company data by investment bank Goldman Sachs and using corporation tax rates sourced from KPMG). ROCE, which is profit divided by capital employed, is also the product of profit margin and asset turnover.

easyJet is not the leader in either margin or asset turnover, but is healthy on both measures.

The new aircraft deal should lower unit costs, which should be positive for margins. If easyJet's discount from list price really is significant, this, together with the move to larger aircraft, should also be beneficial for asset turnover. The combination of a positive impact on both margins and asset turnover should mean that the deal is good for ROCE, but it must first be approved by shareholders at an EGM on 11-Jul-2013.

Sir Stelios, who (with his brother and sister) controls 37% of easyJet shares, was predictably less than enthusiastic about the deal when it was announced and may be expected to vote against it. Nevertheless, given that the share price has increased by 130% over the past year – during which time shareholders have known that easyJet management was considering an aircraft order – it seems that the majority of shareholders are likely to back management.

In recent years, Sir Stelios has renegotiated his brand licence agreement with easyJet and influenced the airline to be cautious over capacity growth and to pay dividends. He too should now back management.