The order is a breakthrough for Airbus, which announced the A320neo in Dec-2010. The order is the largest single firm order for large jets in commercial aviation history, and also makes IndiGo a launch customer for the A320neo. Engine selection will be announced by the airline at a later date.

The order helped to push up shares in Airbus suppliers, with GKN gaining 3.9% and Meggitt up 1.9%. Shares in other aircraft manufacturers were also higher, with Bombardier up 3.4% and Embraer gaining 1.4%. Boeing shares were down 0.2%.

Meanwhile, BAE Systems shares eased 0.1% on Tuesday. The company announced that it will not sell its Platform Solutions unit, which manufactures aerospace and hybrid vehicle components. The company had been unable to reach agreement with interested buyers, which reportedly included General Electric, Eaton Corp and Honeywell International, as well as private equity firms. 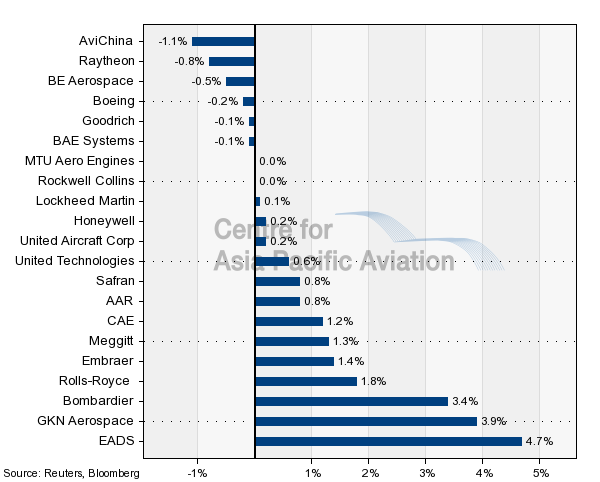