Delta Air Lines has reignited its battle against the US Ex-Im Bank through new litigation that revives old arguments that the bank’s loans disrupt the competitive balance among global airlines. But the carrier and its co plaintiffs in the new litigation, Hawaiian Airlines and the Air Line Pilots Association (ALPA), are using a framework imposed on the bank in approving loans as their latest line of defence, claiming recently approved financings violate a new Congressional mandate that governs how the bank assesses loan approvals.

Delta is taking aim at familiar adversaries in its latest quest to squelch Ex-Im aircraft financing, arguing that the aircraft the bank plans to finance for the Gulf powerhouses of Emirates and Etihad will continue to hurt the viability of US carriers. But the airline is also setting its sights on financial support Ex-Im is evaluating for its SkyTeam partner Korean Air and Latin America’s new powerhouse LATAM Airlines Group.

The campaign by Delta and the US trade group Airlines For America (A4A) against Ex-Im surfaced in 2010, when the carrier publicly began decrying the financing the bank lent to foreign carrier buying Boeing jets. Delta’s mounting opposition put all the parties in a precarious position as it pitted Boeing against one of its largest and most important customers.

Since that time new Aircraft Sector Understanding (ASU) has been adopted by the Organisation for Economic Co-operation (OECD) governing export credit agency financing that in the most simplest explanation raises the fees borrowers pay on loans based on a risk profile. But even the most credit-worthy airlines now pay higher financing fees.

Also during that time Delta and A4A unsuccessfully challenged Ex-Im financing of Boeing widebodies ordered by Air India, and are now working through the appellate process to reverse the initial decision in Ex-Im’s favour.

While the industry was, and still is, trying to unravel the complexities of the new ASU, the US Congress mandated new requirements for Ex-Im to publicly disclose guidelines it uses to conduct economic analysis of loans and to supply public notice for comment on transactions exceeding USD100 million.

The crux of Delta’s latest argument is that since the new requirements took effect Ex-Im has approved loans supporting Boeing widebody aircraft purchases by Emirates, Etihad, Korean and LATAM.

Delta dutifully filed comments objecting to the financings for those carriers, and claims that Ex-Im ignored its observations and failed to perform a meaningful economic analysis of the transactions to ensure the transactions would not adversely affect US industries.

Using its often stated arguments against Ex-Im aircraft financing, Delta concluded that the pledged commitments in question would harm US carriers and their employees by lowering the cost of capital for foreign competitors, allowing those airlines to quickly recoup their investments or lower ticket prices on competing routes. Unsubsidised carriers would be forced to cut their prices or reduce capacity on routes where they compete with carriers operating Ex-Im-supported aircraft.

Delta’s case for an adverse effect of Ex-Im-financed aircraft for Emirates and Etihad rests on the business models those carriers have forged in building up Dubai and Abu Dhabi as global connecting points, siphoning off both O&D and connecting passengers to those markets.

The parties opposed to further Ex-Im financing for Gulf carriers conclude Emirates’ expansion into the US since 2004 has been supported in part by its ability to secure USD3 billion in Ex-Im financing to support its fleet growth, which has also fuelled the rise in passengers carriers by Emirates on its US routes from roughly 33,400 in 2004 to more than half million in 2011.

Round-trip passengers travelling on Emirates to the US: 2004 to 2011

Using data compiled by US consulting firm Compass Lexecon, Delta, Hawaiian and ALPA attempt to argue that Emirates’ overall growth and the addition of new US markets has been underpinned by Ex-Im. However, the figures compiled by Compass Lexecon show that about 12% of Emirates' 178 aircraft are financed through Ex-Im, which equates to only 21 aircraft.

Estimates by Delta’s consultants attempt to reflect the new competitive dynamics ushered in by Emirates’ rise. They conclude Emirates competes with US airlines on international routes between 301 different city pairs, which results in USD2 billion of exposure of US carrier annual revenues to competitive impact.

Latching onto comments that Emirates executives have made about potentially launching flights to Chicago, Delta and its consultants argue that daily service to Dubai would result in Emirates capturing about 20% of passengers travelling on US carriers on competing routes (about 37,000 annual passengers), which equates to roughly USD26-USD27 million in US carrier revenue each year.

Pressing their case for adverse conditions if Etihad receives Ex-Im financing for 777s to potentially serve Los Angeles daily from Abu Dhabi, Delta’s consultants estimate the carrier would capture roughly 17% of the passengers travelling on US carriers to competing routes (about 32,000) annually, which translates into USD18 million to USD38 million in annual US carrier revenue.

While there might be merit to some of the claims offered in the arguments, the reality is likely somewhere in the middle. Both Emirates and Etihad are quite young compared to their US counterparts – 28 years old and 10 year old, respectively. As they flesh out their route networks it is necessary to broaden their reach into North America, a strategically important region despite its evolving maturity.

It is also tough to pinpoint if those airlines are in fact operating Ex-Im financed aircraft on every US route given each carrier’s unique aircraft rotation and maintenance schedule. Estimates of lost passengers are just that, and it is not clear if they take into account requirements that employees of US government entities travel on US carriers, and the competitive response by US carriers to retain their high-yielding business customers.

No airline remains safe from Delta’s scrutiny – even SkyTeam partners

Delta’s pursuit of Ex-Im reform is so charged that it is willing to single out its SkyTeam partner Korean as a potential benefactor from the unfair competitive dynamics it believes Ex-Im financing produces. The argument rests on a rapid rise in passengers transported by Korean to and from the US that parallels the USD5.1 billion in Ex-Im financing the carrier has received since 1997.

While Hawaiian is the main carrier cited in the argument that Korean’s Ex-Im finance will distort the competitive reality, Delta has thrown its weight behind the contentions that the approved financing for additional 777s and 747s operated by Korean would further disrupt the competitive balance. The argument specifically cites the resumption of Korean on flights from Tokyo to Honolulu.

But the reality is that five carriers serve Tokyo Narita and Haneda from Honolulu and presently Korean accounts for roughly 11% of the total one-way seats on offer between Narita and Honolulu for the week of 14-Apr-2013 to 20-Apr-2013, while Hawaiian has slots at Haneda, which is closer to Tokyo’s city centre and is a selling point to many travellers. It may be a stretch to argue that Korean’s re-entry into the market by operating an aircraft backed by Ex-Im financing would significantly upset competition as the market already is arguably highly competitive given the number of airlines operating between Tokyo and Honolulu. 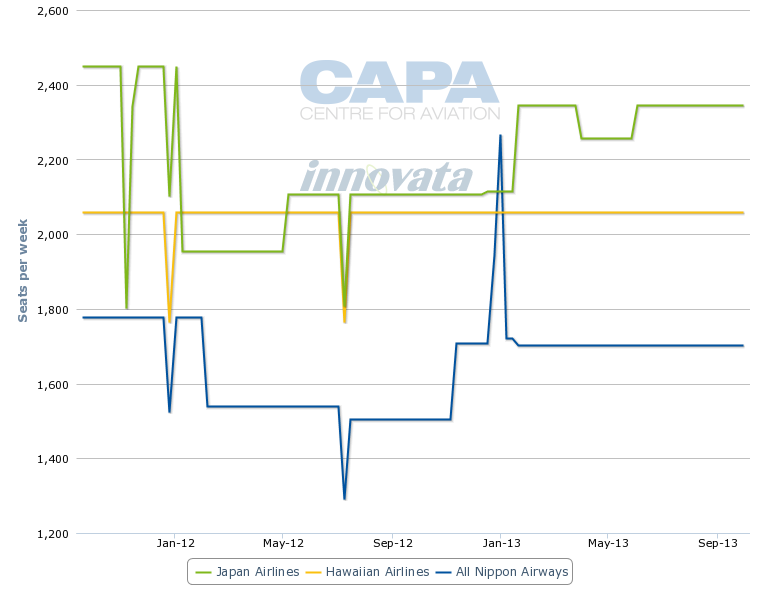 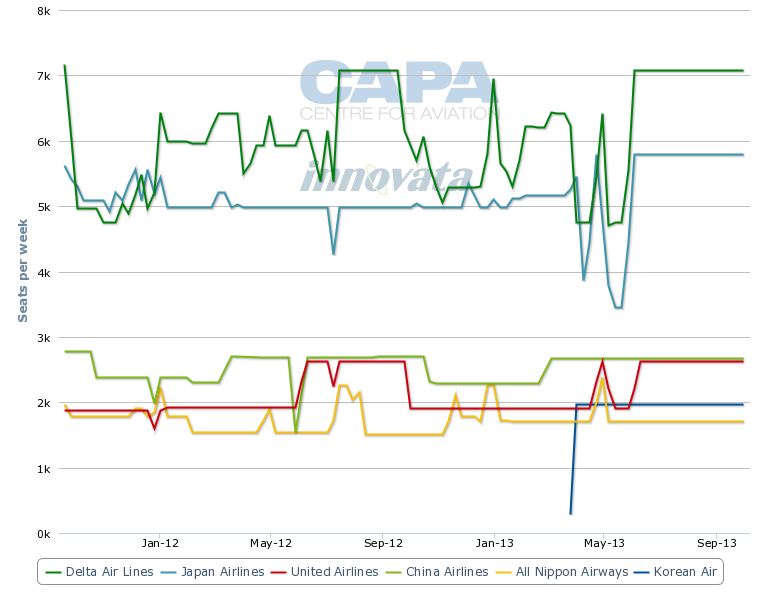 Delta and its partners contend that Korean is a financially stable carrier, growing its operating profit by nearly 31% in 3Q2012, which it believes gives credence to its conclusion that the carrier does not need Ex-Im Bank financing for its aircraft. That same argument was partially applied to LOT, which is using bank financing for 787 widebodies.

The parties argue LOT has the financial support of the Polish Government and has previously obtained private financing for a number of aircraft. But LOT reportedly is working to regain profitability during 2014 after undertaking a EUR40 million restructuring as part of plans by the government to privatise the carrier. The 787s are largely replacement aircraft for LOT, so its upgrading of aircraft on existing North American routes to New York, Chicago and Toronto does not seem as threatening as carriers opting to open new routes with Ex-Im Bank financed aircraft.

ALPA, Hawaiian and Delta are also dismissive of LATAM’s seeking of Ex-Im support for Boeing 767 and 777 widebodies, noting that the carrier has used its existing 777s to expand service to the US. But similar to Emirates and Etihad, North American expansion is logical for LATAM as traffic between the region and Latin America continues to grow. As Latin America’s largest carrier, LATAM has to leverage its strength and build traffic flows between the two regions.

Ex-Im Bank funding aside, the carriers under Delta, Hawaiian and ALPA’s scrutiny are largely in expansion mode, and will continue to flesh out their networks to reach proper scale. The case could be made that Ex-Im support helps to accelerate that expansion, but there are merits to arguments that US carriers have also received breaks by rejecting leases on older aircraft during their respective stints in Chapter 11 that helped them clear their cache of inefficient aircraft.

As Delta’s frustration over what it deems as unfair subsidies continues to flare up, its constant pursuit to dissolve Ex-Im funding reflects the often bitterly competitive global airline market place, where carriers are using every means possible to ensure they can effectively keep competitive encroachment to a minimum.